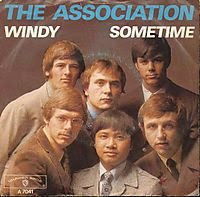 Some middle aged record exec (probably pudgy, 50-ish, bald and constantly sexually harassing his blonde short skirted “secretary”) probably thought: “Hey! Let’s get some “young but clean and industry friendly” producers to update this California thing. Surf music drowned last winter”. BANG! Hip, young, A&R friendly producer nails it after the “boys upstairs” give the green light to assembling the Wrecking Crew (or some other sundry professional musicians, no time to let the artists play on this , time is $, crank it out assembly line style). So they throw it together: sweet, multi-layered intricate harmony vocals, a faint Latin type backbeat, harpsichord, bongos and/or tabla. And that’s just the first 45 seconds of the tune (it's called "Windy" written by some gal named Ruthann Friedman, Google her name and you'll find her website/blog where she blows up all those oft told tales of what inspired it)! Then ala “Wild Thing” by The Troggs, which used an ocarina, you throw in some flute/recorder/penny whistle solo! Then mash it all together at the crescendo with the lead singer doing his thing, then add one guy singing “dah dah dah dah dah dah dah” (which when you sing it yourself whilst trying to count the “dah’s” sounds a lot like “My Girl”). Then another guy’s vocals come in behind the “dah dah” fella backing and he just stresses single words held out for the length of a verse :”Who”, “smile” etc. in tandem with another guy who’s singing along with the lead singer but singing an octave higher. Put it all together and it sounds like the harmony vocals answer to that sound a train makes when it throttles past you at high speed while you’re inches away on the platform. And just as the vocal meshing is messing their minds they bring back the flute thinggy for the last 30 second. BANG! And it worked. For 2 minutes and 56 seconds American thought so when it peaked at #2 nationally in July 1967. A perfect summer hit. Who else but the “turned on” people would’ve paid attention to such musically intricate layers of sound (and probably scoffed because it was “a hit” but secretly loved it) while the whiskey & soda generation politely nodded their heads and smiled like it was the 1967 “Selecta” or “Splenda” version of the Beatles! Dah Dah Dah Dah X 8! Figure it out if and when you’re nice.

'Windy' is a great lite-psych tune, perfectly played and sung. Infact I've loved The Association since first hearing 'Pandoras Golden Heebie Jeebies' in the mid 80s on one of those Nuggets LPs Rhino Records released.