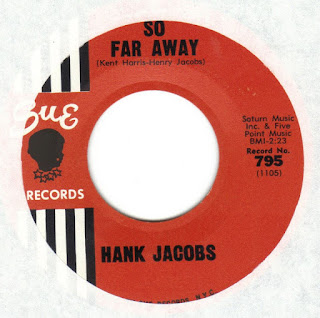 1. HANK JACOBS-"So Far Away"
From the U.S. Sue label came this 1963 instrumental that I often overlook as being too "well known" and it turns up somewhere and reminds me of what a great little tune it is. Sadly none of his other stuff is remotely affordable any more!

2. OLIVE BONE-"Jugger Tea"
Here's a mega obscure 1966 instrumental released by U.K. Parlophone as a B-side single full of heavy brass, busy guitar licks and a jazzy groove.  I have no idea who they were but this track swings.


3. THE APPLEJACKS-"No Time"
The Applejacks are often unfairly maligned for their one off U.K. hit, the Lennon/Macca throwaway "Like Dreamers Do".  Somehow Decca must have seen some promise in them as they were allowed to record an LP in 1964 full of the usual lame beat group covers ("Kansas City", "Too Much Monkey Business" etc) and this down trodden beat ballad reminiscent of The Zombies at their most wistful , angst ridden best.

4. GORDON LIGHTFOOT-"Sundown"
"I can see her lyin' down in her satin dress in a room where you do what you don't confess"
I've gone weird. I turned 50, grew a moustache and started listening to Gordon Lightfoot. The end is nigh.

5. TURQUOISE-"Tales Of Flossie Fillet"
Turquoise should have been stars, Dave and Ray Davies grew up on the same street as them, they were friends with Keith Moon and John Entwistle and managed and produced by Tom Keylock (though the idea of a guy from a car hire knowing his way around a recording studio sounds pretty ludicrous). "Tales Of Flossie Fillet" is a jaunty little tune not unlike the Kinks '68. "Dave and Ray" (Davies) and "Moon The Loon" get a mention in the last verse....Sadly once Keylock's career with The Stones waned so did his interest in the band and their Decca contract evaporated soon thereafter. 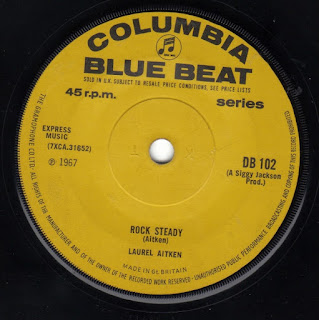 6. LAUREL AITKEN-"Rock Steady"
From my favorite U.K. 60's ska/reggae label, Columbia Blue Beat, this 1967 45 by Laurel Aitken is mostly New Orleans boogie woogie r&b with a slight ska beat behind it all propelled by some solid sax/piano backing. It's sort of mundane but I enjoy it's laid back simplicity.

7. PETE MOORE-"Catwalk"
By the mid 90's I was musically restless. Bored with Britpop and with very few 60's British/Euro things being unearthed on compilations and BANG! I stumbled upon the kitsch/music/lounge scene. Not "lounge" in that dreadful tiki/Madmen/mambo/Sinatra scene but lounge as in 60's/70's UK/Euro music library sounds, kitschy versions of pop standards and instrumentals from films (where sometimes the principals even kept their clothes on) and the like. "Catwalk" by Pete Moore is a perfect example of this, unearthed by the Karminsky Experience Inc. for the excellent Deram comp "Inflight Entertainment" dripping with Hammond, flutes and a rhythm not unlike "Spooky".


8. XTC-"Are You Receiving Me?"
Brilliant, quirky, jerky, ultra-Anglo aggro pop with a slight 60's twist. In my book XTC stood ahead of the plethora of faceless, talent-less no way new wave scene with their frantic/frenetic little melodies and pop quirks.  The guitar solo on this always takes me back. XTC were the first live band I ever saw and will always occupy a special place in time for me.

9. MARIANNE FAITHFUL-"Something Better"
I always felt bad for Marianne Faithful. She had it all, beauty, the voice, a pop star boyfriend and a music career and poof it all went. Although "Something Better" is a Goffin/Mann composition the lyrics seem painfully tailored for her which makes it work even more, no matter how tragic.


10. 5:30-"13th Disciple"
Imagine my surprise that the band behind 1985's "Catcher In The Rye" on the "Cutting Edge" compilation LP were still hanging in there. My friend Bob gave me their new CD "Bed" for my 25th birthday and a few weeks later I was in a pub and this video came on and stopped me dead in my tracks with their stripey jumpers, Rickenbackers and Epiphones and John's Children haircuts.  It's held up remarkably considering my disdain for most things "Britpop".
By William - November 28, 2016

Thank you for the link to "Are You Receiving Me". XTC made some great promo videos and obviously had fun doing them too. How I wish Virgin would put out a video anthology on DVD and include The Dukes of Stratosphear promo. My battered VHS compilation is becoming increasingly worn with each passing year but is still guaranteed to cheer my up. In the meantime we have YouTube to dip into and remind us of a time when Andy Partridge was more up-beat about music making. A fantastic singles band.