There's a great scene in the 2000 iconic London underworld film "Gangster No. 1" where a bunch of aging old gangsters are sitting around a table drunk at a (presumably) private boxing match and one of them begins to reminisce about a record label that needed "seeing to": "I can still picture the record label going round and round, what was it.....Dee-ram records was it?"

Deram records, a favorite subject of ours, was launched in the UK in 1966 as a subsidiary of Decca records (in the USA it fell under the umbrella of London records). Interestingly the labels intended first releases were a series of orchestral LP's (six in all) issued in October 1967. They were preceded by a matter of days by two releases on September 30th Beverely's interpretation of Randy Newman's "Happy New Year" b/w her own "Where The Good Times Are" (Deram DM 101) and Cat Steven's "I Love My Dog" b/w "Portobello Road) Deram DM 102). The label had a long and prolific run until 1979 when it ceased releasing contemporary records and remained solely a reissue label. I decided to pick 10 of my favorite 45 releases on the label, no easy task I can assure you. Their UK releases are listed first and US releases (if any) are listed second in each entry. Enjoy! 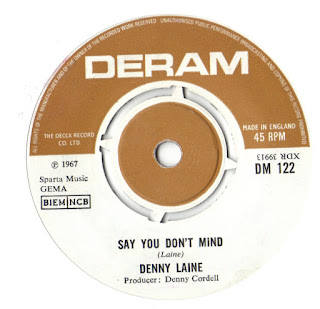 1. DENNY LAINE-"Say You Don't Mind" UK DM 122, US 45-7509 1967
Former Moody Blues front man Denny Laine wasted no time kick starting a solo career after leaving his band in the Summer of 1966. Lushly orchestrated by producer Denny Cordell (who had also produced the last 4 Denny Laine era Moodie's 45's) "Say You Don't Mind" is nothing short of your brilliant archetype pop/psych ditty. Starting with woodwinds  and the the earlier mentioned strings it gave hope for what would be a brilliant solo career that sadly only resulted in one more solo 45 for the label.

2. DAVID BOWIE-"The London Boys" UK DM 107 1966
Originally demo'ed in early 1966 for Pye records during Bowie's one year stint with them "The London Boys" was rejected for release by producer Tony Hatch due to its drug references.  After leaving Pye Bowie and his backing group the Buzz re-cut it at the famous RG Jones studio in Morden in October 1966 and when they were signed to Deram it became the flip of his debut "Rubber Band". Somber and effective with just organ, bass, woodwinds and trumpets it builds to a crescendo as drums come in and Bowie disdainfully laments about the seamy side of life "with the London boys". 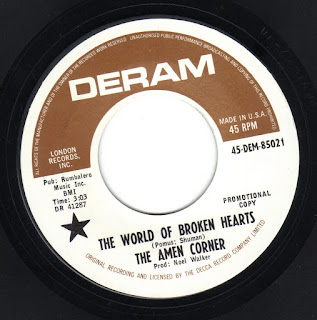 3.  AMEN CORNER-"World Of Broken Hearts" UK DM 151, US 45-85021 1967
Welsh 7 piece Amen Corner was one of the tightest blue eyed soul bands in the UK in the late 60's. Their 1967 cover of the Pomus/Shuman composition (previously cut as a B-side by Cissy Houston) is miles beyond the original with the horns having an almost psychedelic effect as they fade in and out behind Andy Fairweather-Low's distinct soulful vocals and the churchy B-3 and subtle strings that are just discernible. Magic!

4. FRIENDS-"Mythological Sunday" UK DM 198 1968
Friends were a one off studio concoction by legendary singer/songwriters John Carter and Ken Lewis. "Mythological Sunday" was the flip of the easily forgettable "Piccolo Man". Wrapped in eerie Mellotron and the pair's soaring harmonies it ends with a drone and war sound effects and the poignant refrain "a million men went off to fight a war in foreign lands and fifty thousand came back home with blood upon their hands, would any soldier that was left go back to fight once more if he could know before he died what he was fighting for" before the main Mellotron riff softly comes back like an ominous clarion. Freaky. 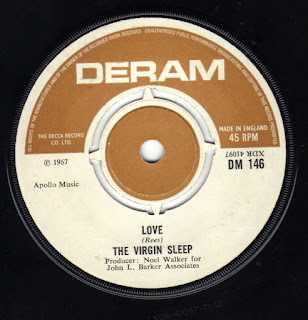 5. VIRGIN SLEEP-"Love" UK DM 146, US 45-7514 1967
Sounding not too dissimilar to The Trogg's "Love Is All Around", Virgin Sleep's debut 45 in truth was issued a whole month before!  Beautifully orchestrated with faint sitar licks and finger cymbals, "Love" is a perfect pop-psych opus with it's Gregorian chant backing vocals and Left Banke inspired strings while the lyrics encapsulate the whole "love" flower power ethic without being cheesy or camp. Photos of the quartet show them looking very un-flower power in the pattern button down collar shirts and mod haircuts no doubt unsure of their direction. Produced by Noel Walker who also was behind fellow label types The Eyes Of Blue and their Welsh brethren Amen Corner.

6.  TINTERN ABBEY-"Vacuum Cleaner" UK DM 164 1967
Easily my #1 favorite psychedelic 45 of all time and without a doubt the most expensive and sought after example of it's genre, this sonic dose of British psychedelia stands above all comers. On the flip of the curiously titled "Beeside", "Vacuum Cleaner", an odd ode to a household cleaning apparatus, is musically sparse. It's just bass, drums (with some heavily miked cymbals) and double tracked vocals until a heavily phased wah-wah pedal guitar solo buzzes out of nowhere and does it business and quits. 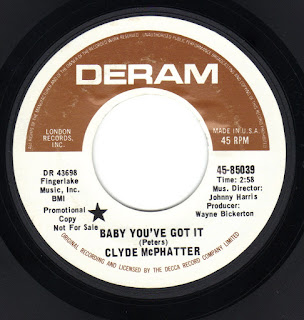 7. CLYDE McPHATTER-"Baby You've Got It" UK DM 223, US 45-85039 1969
Ex-Drifter Clyde McPhatter cut several tracks in 1968 in the UK under the supervision of producer Wayne Bickerton (see The Flirtations below)  that eventually resulted in two Deram 45's. "Baby You Got It" was the last of the two (preceded by the Jackie Lomax/Wayne Bickerton penned "Only A Fool" in July 1968, DM 202). With it's uptempo groove, soulful strings, vibes and fuzz bass it was an instant smash on the Northern soul scene in the 1970's. Sadly neither single did anything to resuscitate McPhatter's flagging career. 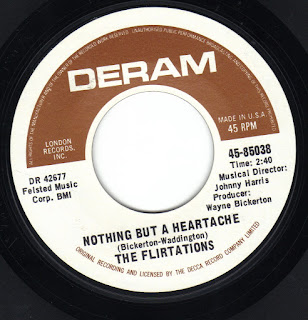 8. THE FLIRTATIONS-"Nothing But A Heartache" UK DM  216, US 45-85036 1968 /45-85038 1969
The South Carolina trio The Flirtations came to England and were scooped up by former Lee Curtis and The All Stars/Pete Best Combo members Wayne Bickerton and Tony Waddington.  The Liverpudlian duo were then part of Decca/Deram's in house magicians of A&R and production. They wrote and produced pretty much every track the Flirtations cut on Deram with a handful of exceptions and none was stronger than this, their 2nd 45 for the label unleashed in November 1968. Wrapped in the lavishly orchestrated strings and horns it's by far one of the label's most powerful 45's which fails to explain why it only reached a paltry #31 in the USA and #51 in the UK (it was released in the US twice, in December 1968 and again in January 1969, each pressing bearing a different B-side)!!

9. THE SYN-"Grounded" UK DM 130, US 45-7510 1967
The Syn were one of the most active bands on the London scene racking up a record 36 appearances at the Marquee Club in less than a year in '66-'67.  The band's existence was brief and they cut a mere two singles for Deram but what a ride they had. "Grounded", the flip of their debut "Created By Clive" (dubbed "Created by idiots" by the band who hated the number and refused to play it live), owes much to their Marquee heroes The Action from it's fluid Rickenbacker licks to it's high falsetto harmony backing vocals and it's fattened up by some tasty Farfisa organ. The Syn was also the home of future Yes members Peter Banks and Chris Squire. 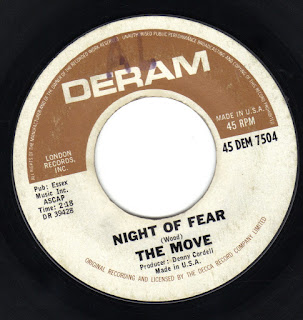 10. THE MOVE-"Night Of Fear" UK DM 109 1966, US 45-7504 1967
Comprised of the cream of the Brum beat scene the Move burst into the pop world in December 1966 with their debut 45 (produced by Georgie Fame producer Denny Cordell) with guitarist Roy Wood's ode to paranoia "Night Of Fear" (the flip "Disturbance" also seemed to tackle a recurring Move song theme, mental illness). The track starts with an "1812 Overture" lick which Roy Wood cited as coming from his parents love of classical music. The Move were huge soul purveyors in their well honed live set prior to this which makes me wonder whether the idea came from Ike and Tina's "Tell Her I'm Not Home" instead. Led by the band's brilliant four part harmonies and heavy bass from the band's resident ace face Chris "Ace" Kefford it ranks up there with the greatest Who and Creation sides. Kefford soulfully croons the "just about to flip your mind, just about to trip your mind" in the refrain. Two years later he would be edged out of the band after an L.S.D. induced nervous breakdown.