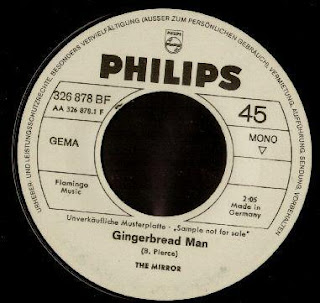 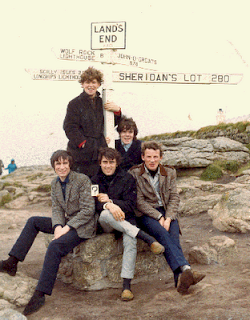 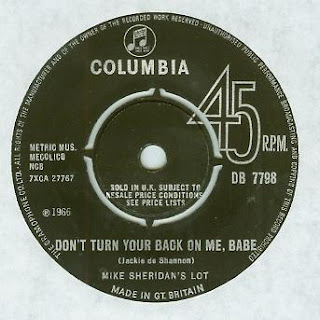 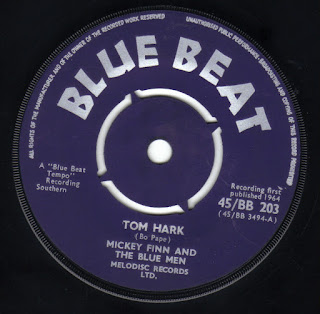 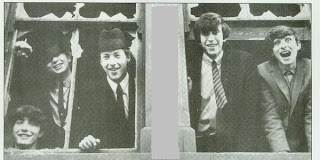 For those not in the know, Blue Beat was a label set up in the U.K. by an enterprising gentleman named Emil Shalit for the purpose of pressing and releasing Jamaican ska music records in England (the label's best seller was the well known ska legend Prince Buster). Ska was quite lucrative in the U.K. owing to the West Indian expat communities mass consumption of such sounds and to a lesser degree the mod movement's discovery of it care of DJ's at the Roaring Twenties club in London. Chris Blackwell helped score a major hit with the ska flavored "My Boy Lollipop" by Millie Small on Fontana records in the summer of 1964 and the scene seemed set for mass ska craze in Great Britain.

British bands were quick to pick up on the ska craze, but others were already there and done with it by then. Georgie Fame & the Blue Flames had previously cut two ska instrumental 45's (J. A. Blues / Orange Street R&B JB 114 and Stop Right Here / Rik’s Tune R&B JB 126) earlier in their career as The Blue Flames for the small ska label R&B in 1963 and were including ska numbers in their live set (and eventually releasing an entire E.P. of ska covers "Rhythm N' Blue Beat" on Columbia SEG 8334 in 1964 ). Chris Farlowe and the Thunderbirds cut a 45 under the pseudonym of "The Beazers" called "The Blue Beat"(Decca F11827 1964) and the dreadful Migil Five had a hit with a cheezy ska flavored version of "Mockingbird Hill"(who cares what label it was on, it was god awful).

Britain's Mickey Finn & The Blue Men were an odd lot. They'd been playing r&b, had Jimmy Page actually in their band for a time later on and (to my knowledge) hold the distinction of being the only white British band to have a single released on Blue Beat. Their one and only item on the label came in the form of "Tom Hark", a number that was a 1958 #2 U.K. hit for a South African group called Elias and the Zig Zag Jive Flutes. Georgie Fame included his take of it on his "Rhythm n' Blue Beat" EP in 1964 as well, though I still haven't been able to ascertain which act cut it first. Anyone familiar with it's infectious melody will know how hard it is to remove from your head once you've heard it. Mickey Finn & the Blue Men's take is an instrumental that chugs along with a shuffling mid tempo with some lively organ and plonky bass until a very lively sax bursts in joins on for the rest of the song. The arrangement is unusual because the band's next few releases featured no horns. The B-side "Please Love Me", is sadly a dreadful affair delivered by a VERY deep voiced gentleman who would've been better suited singing doo-wop to the mild ska backing similar to the A-side, it was also written by one Alan Hawkshaw! The record failed to dent the charts but the band held firm to their ska influences when they released their next 45 later in the year on Oriole CB-1927 coupling versions of Bo Diddley's "Pills" b/w Jimmy Reed's "Hush Your Mouth, both numbers being cut with a ska rhythm behind them (you can read about that here) . Both sides of the Blue Beat 45 have been legally reissued to the collection of their work "Garden Of My Mind: The Complete Recordings 1964-1967".

POSTSCRIPT 2015:
It was recently revealed in "Ugly Things" that the actual band Mickey Finn and The Blue Men had nothing to do with this record and that it was recorded using session musicians, among them Alan Hawkshaw who would go on to find fame with The Mohawks and as a KPM house musician.