Fleetwood Mac Shake The Case Of The Blues


Here in America Fleetwood Mac will always be associated with the 70's and all of the Colombian marching powder excesses and domestic partnership in a band gone wrong that go along with it, but as most of you know they began as an entirely different horse of an entirely different color. Bursting forth in 1967 their C.V. and line-up read like a Who's Who of British r&b and John Mayall's Bluesbreakers alumni. But by the late 60's their habit of electrified blues was shifting into different horizons with their 1969 #1 (U.K.) instrumental "Albatross" and it's follow up, the somber "Man Of The World" (#2 and their sole 45 on Immediate records).  1970 saw the release of today's subject, guitarist Peter Green's "The Green Manalishi (With The Two Pronged Crown)", a UK #10 and subsequently Green's last record with the band before mental illness took it's toll and it's founding member moved on. Green later indicated that the number was about the evils of money and was written shortly after a nightmare about a green dog.

"The Green Manalishi (With The Two Prong Crown)" is one of the heaviest and darkest records you will ever hear and even without knowing the background to Green's subsequent illness it's musical make up is pure bona fide musical doom. Plodding, heavy and full of layers of guitars it literally jumps all over the place with each new change as complex as the next with Green and guitarist Danny Kirwan playing their asses off.

The flip side "World In Harmony" is a haunting beautiful instrumental by Green and Kirwan that starts of with some harmonics with a melody not unlike the band's previous single "Man Of The World". Eventually it's somber mood picks up with a slightly menacing line coming in, but just briefly before reverting back to the lilting, gentle melody.

Both sides are available on a fairly comprehensive double Fleeetwood Mac CD "Love That Burns: The Blues Years" which is still in print.

Hear "The Green Manalishi (With The Two Pronged Crown)":

Alan Price: Life After The Animals


Much like Paul Jones when he jumped ship from Manfred Mann, ex-Animal Alan Price ran quickly away from the r&b of the band that made him famous and straight into the arms of "pop music". "The House That Jack Built" was Price's sixth solo 45 in the U.K. Issued in July 1967 it was also his first composition to air as an A-side in his solo career and the absolute antithesis for the Summer of Love.

For years I had always assumed "The House That Jack Built" was a cover, perhaps even a Randy Newman tune as there's something about it's jaunty mood that reminds me of it's predecessor, a version of Newman's "Simon Smith And His Amazing Dancing Bear" (UK Decca F12570). It's quirky and the lyrics about a house of eccentrics give it that offbeat pop feel akin to the Manfred's hit "My Name Is Jack". It also sounds suited for future partner in crime Georgie Fame and his poppier sides he was cutting in 1967. 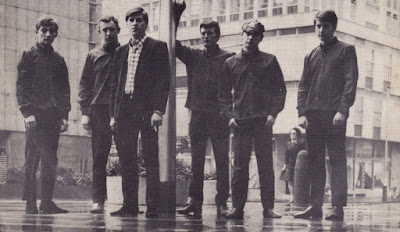 The flip side, "Who Cares" is another Price original.  Again the lyrics are a tad oblique and there's nothing redeeming about it to my ears. Next!

Both sides are available on a 3 CD set "Twice The Price" that contains everything Price ever recorded for Decca.

Hear "The House That Jack Built":


U.K. duo The Young Idea were very much in the vein of Paul & Barry Ryan, Twice As Much or The Truth as far as UK duos go. Comprised of Douglas Macrae-Browne and Tony Cox they cut a host of 45's (and an LP) in the UK on the Columbia label from 1966-1967. Today's subject is their fifth and final single, issued on the UK a Columbia DB 8284 in October 1967, it was held up for a US release until January 1968 (where it was their third and final US single).

"Mr. Lovin' Luggage Man" was written by Les Reed and Barry Mason and it's a pseudo baroque orchestrated pop piece not at all dissimilar to Twice As Much. It's a bit chirpy at times but the strings are absolutely ear catching! 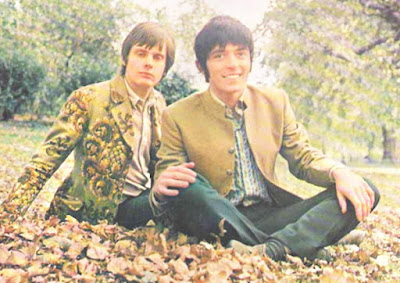 "Room With A View" is the stronger of the two tracks in my mind.  The sawing violins have a discordant ring to them that brings the Velvet Underground to mind and it has all the other trappings necessary for it to be a pop psych gem from it's harmonies to it's slickly produced perfection.

"Mr. Lovin' Luggage Man" cropped on on one of the "Piccadilly Sunshine" compilations, on their "Part Thirteen" volume. Sadly "Room With A View" has failed to materialize anywhere as of yet.

Hear "Room With A View":