The Alan Bown Set were a seven piece British soul/r&b group who cut five singles in that vein for the Pye label in the U.K. before switching labels (moving to MGM), names ("The Alan Bown") and genres (pop/psychedelia), in that order. Their debut of these three was in October of 1967 when MGM in the U.K. issued "Toyland" (MGM 1355). It's follow up, "Story Book" (MGM 1387) was issued in March 1968 and simultaneously released here in the U.S.
"Story Book" differs slightly from the version released on the band's LP "The Alan Bown" (US Music Factory MSF 12,000). The single starts with a demented laugh (with trippy affects) that is phased into the intro of horns that resembles The Graham Bond Organization meets Near Eastern sounds. There's Hammond, Mellotron, high harmony backing vocals, guitar with vibrato/echo and lead singer Jess Roden's soulful voice singing about nursery rhymes, whimsy and true "Pop psych"/"toy town psych" lyrics. The whole thing works because somehow the r&b horns and the voice of a fine blue eyed soul vocalist lend themselves quite well to the psychedelic nursery rhyme whimsy and Arabian nights put to music!
The flip side, "Little Lesley" stays firmly in the "Toy town" pop psych genre with regal sounding horns and a jaunty feel to it that sounds indistinguishable from any number of less than stellar pop-psych tracks on Deram or Decca in '68. Unfortunately for me it falls flat, like an unmemorable Manfred Mann from the same era that isn't unlistenable but doesn't merit further replays either.
Both sides appear on the earlier mentioned 1968 long player "The Alan Bown" (issued as "Outward Bown" in the U.K. ).
Hear "Story Book":
https://youtu.be/t2khuOjHT00
Hear "Little Lesley":
https://youtu.be/cPyJfRFZg4E
By William - February 28, 2022 No comments:

Email ThisBlogThis!Share to TwitterShare to FacebookShare to Pinterest
Labels: Ala Bown

U.K. instrumental band Sounds Incorporated are relatively obscure to  Americans, most will know them for their brass work on The Beatle's "Good Morning,Good Morning" on the "Sgt. Pepper.." LP or perhaps from the fact that they opened for The Beatles at Shea Stadium in August of '65.
Those trivia bits aside, Sounds Incorporated (or Sounds Inc. as they were sometimes known) were a six piece British instrumental combo who had been recording records since 1961. They were also known for being musos in that they backed several visiting American performers (their debut British single was actually backing Gene Vincent) and were frequently called upon to back British musicians as well. They were also recognized for having an extremely tight horn section and featured the drumming talents of future in demand session man Tony Newman.
Today's subject was their third American single (and their eighth in Britain excluding the earlier mentioned Gene Vincent 45, issued there as Columbia DB 7545 in April 1965). It was simultaneously released on both sides of the Atlantic. It was issued with "Time For You" as the A-side but I have chosen to "flip" it here because I prefer the B-side, "In The Hall Of The Mountain King".
"In The Hall Of The Mountain King" of course dates from the 1800's when it was written by Edvard Grieg for the play "Peer Gynt". Sounds Incorporated use their full horn sound of tenor/baritone sax to an amazing effect weaving an insane path through the twists and turns and increasing speed of the number as it progresses to an almost break neck speed. 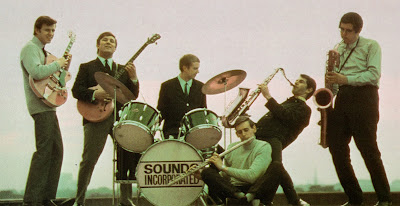 "Time For You" is a slow instrumental number that could have been another mundane Shadows tune if it wasn't for the waltzy sax solo and the almost trippy jangling 12 string guitar licks that resemble The Byrds (guitarist John St. John played a one of a kind Gretsch "George Harrison model" 12 string gifted to him by the man himself).  Add that 12 string action meshing it with some mildly disguised flute and you have a pretty trippy sound for 1965! Interestingly it reminds me at time's of The Graham Bond Organization when the saxes come in, totally mesmerizing stuff!
Hear "Hall Of the Mountain King":
https://youtu.be/6XK_ZtqJP1E
Hear "Time For You":
https://youtu.be/I_1kFRuqM2E
By William - February 21, 2022 No comments: 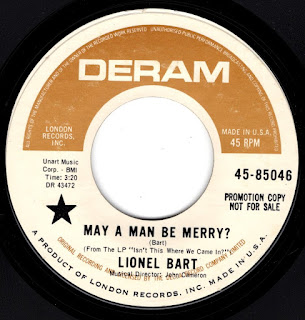 LIONEL BART-May A Man Be Merry?/Isn't This Where We Came In? US Deram 45-85046 1969
American's will always associate British performer Lionel Bart with his highly successful musical "Oliver". Though I knew he dabbled in a music career it was not until I stumbled upon this track on one of the "Piccadilly Sunshine" psych-pop compilations that I realized he recorded things outside the "showbiz" realm.
"May A Man Be Merry?" is a kitschy track that would not sound at all out of place on a Mike D'Abo era Manfred's record. It's heavy on the brass (arranged by the amazing John Cameron) which perfectly punctuates things with a nice full sound as some intricate ivory tinkling joins in and gives it a jaunty feel bringing to mind label mate Cat Steven's "good time" Deram tunes.
"Isn't This Where We Came In?" is a trippy little baroque pop piece with strings, interesting key changes and weird effects that seem to anticipate Matt Berry! The heavy Cockney accent brings to mind first LP Bowie and the orchestration screams Scott Walker, what a truly strange kettle of fish!
Both tracks are available on Bart's 1969 Deram LP "Isn't This Where We Came In?"  which was released here in the States. These two tracks are probably the most formed "songs" on the album. I say that because the LP is a weird mix of singing, music, spoken words etc that isn't exactly terribly listenable to my ears.
Hear "May A Man Be Merry?":
https://youtu.be/pmePyChhYtg
Hear "Isn't This Where We Came In?":
https://youtu.be/onhWRwuu9J8
By William - February 14, 2022 No comments:

Joe Brown is a name most Americans won't be familiar with. He started recording back in the U.K. way back in 1959 and became known for his Cockney charm and spikey blonde hair. He had several records released here (nine prior to this release to be exact) and suffered the indignity of having Herman's Hermits note for note cover of his 1961 B-side "I'm Henery The Eighth I Am" shoot to #1 in June of 1965. Also famous for his celebrity pals (Steve Marriott and George Harrison among them, playing on several of George's solo albums as well as George being his best man in 2000) it still came as a shock to hear him record "With A Little Help From My Friends" (issued in the U.K. the day after "Sgt Pepper" was released, June 2, 1967 as Pye 7N 17339 and issued simultaneously here).
Regardless of it's impact his reading of "With A Little Help From My Friends" is utterly charming. It pretty much sticks to the Beatles arrangement though it has more emphasis on a string section which makes it all the more interesting and I may incur the wrath of some of you but I will have to say his voice is far better than Ringo's.
The flip, "Wont'cha Show Me Around" (titled "Show Me Around" on all the other releases around the world) is an uptempo track that would not sound at all out of place on a mid 60's Charlie Rich album when he was making poppy yet soulful records or an upbeat '65 single by Ian and the Zodiacs. It's catchy and bears repeated plays!
Hear "With A Little Help From My Friends":
https://youtu.be/QewNDDxJqyI
Hear "Show Me Around":
https://youtu.be/gcWYRgGbr_Y
By William - February 07, 2022 1 comment: