Shadows And Reflections with Tandyn Almer and Larry Marks

Tandyn Almer and Larry Mark's composition "Shadows And Reflections" is best known to most of our reader's for The Action's version which was released as their final single in June of 1967. What some people don't realize is that the track was cut by a small host of other acts with interesting differences.

It all begins with Twin Cities born wunderkid Tandyn Almer who at the age of 23 became instantly successful and wealthy when his tribute to cannabis indica "Along Comes Mary" by The Association shot to #7 in the US singles charts. Almer also co-wrote "The Message Of Our Love" with the band's producer Curt Boettcher on their debut LP "And Then...Along Comes The Association".  You would have expected him to become a frequent visitor to the hit parade after such a smash but alas he was never, unfortunately, to revisit the Top 40 again. Though denied further commercial success tracks by him appeared continuously on both sides of the Atlantic throughout 1966-1967. His next double entendre, "Alice Designs" (LSD get it?), came out in first in October '66 across the pond by a British act called The Sugarbeats on Polydor 56120 (it was later covered in the States the following year by Mr Lucky And The Gamblers as Panorama 52). At nearly the same time a US group called The Purple Gang (not to be confused with the UK act of "Granny Takes A Trip" fame) released a composition of his called "Bring Your On Self Down" (MGM K 13607) and a track of his called "Poor Old Organ Grinder" was issued by Billy Elder (Patheway 101) in '67. Californian ensemble The Garden Club which featured Mike Brewer and Tom Shipley (later to find fame as Brewer & Shipley) and the composer of The Association's blockbuster "Windy", Ruthann Friedman issued a composition Almer co-wrote with  John Walsh called "Little Girl Lost And Found" as A&M 848 in April 1967 (a British version was cut by Peter And The Wolves on MGM 1352 around the same time). Larry Marks was less prolific during this period with no tracks written by him being released until 1968!

In June 1967 two different versions of a track written by Almer and Marks called "Shadows And Reflections" appeared on both sides of the Atlantic by two different acts. The US release was by The Lownly Crowde on MGM, the UK version by The Action on Parlophone. There would be further versions of the track as well....... 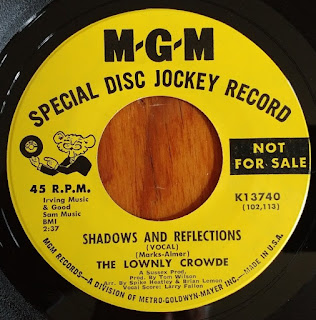 THE LOWNLY CROWDE-"Shadows And Reflections" US MGM K 13740 1967
Though there is some debate on whether The Action heard this version before recording their interpretation. The timing is tight as both recordings were issued in June of 1967 (The Action's reading being issued on the 23rd, The Lownly Crowde version's released date is unknown). Regardless The Lownly Crowde reading is extremely similar in tempo and arrangement to The Action's.  What makes it very different is there are strings  and horns throughout the track and the vocals are shared by a chorus of male and female voices adding more of an M.O.R.  feel to it.  There's also a groovy flute that pops in at one point and a cello solo.  The flip side was an instrumental version of the track minus the vocals with horns pushed up further in the mix. 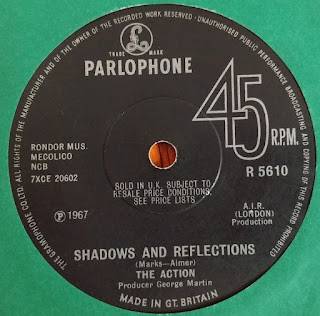 THE ACTION-"Shadows And Reflections" UK Parlophone R 5610 1967
British mod/soul interpreters The Action were well into their path away from soul/r&b and veering towards American West Coast sounds when they issued this, which would sadly be their very last official release. Leading off with George Martin's baroque harpsichord this version is, in my estimation, the definitive one.  Lead singer Reg King's vocals carry the water on this one as do the band's backing vocalists and though the musical backing is rather sparse when compared with The Lownly Crowde (just guitar bass, drums and harpsichord here) it works in no small part due to their delivery. There's a horn solo where the backing vocals are showcased before drummer Roger Powell thunders in to announce the return of the lead vocals. 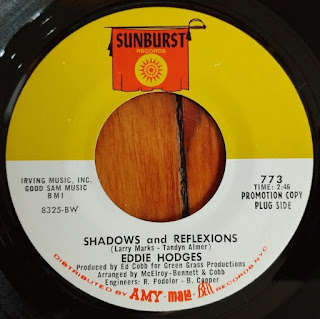 EDDIE HODGES-"Shadows And Reflexions" US Sunburst 773 1967
The third version of "Shadows..." was cut by former child actor turned musician Eddie Hodges. Curiously this arrangement seems to contain elements of both The Lownly Crowde AND Action readings.  Propelled by piano, soaring Beach Boys style backing vocals, and subtle brass and vibes it has a perfect California '67 sunshine pop feel to it. The solo is a mild keyboard with a spooky chorale intertwined. Hodges would later co author two tracks in 1968 with Tandyn Almer  for a single by The Paper Fortress "Butterfly High"/"Sleepy Hollow People" (VMC V719 March 1968).

Ignore the Byzantine Empire photo in the video, this is the Eddie Hodges version:

THE BYZANTINE EMPIRE-"Shadows And Reflections" US Amy A-11,046 1968
University of Michigan act The Byzantine Empire cut three 45's for the Amy label, their final "You" issued as "Byzantine Empire" saw "Shadows.." released on the B-side. It's arrangement is far different than any of the previous versions. It starts with some woodwinds and is far harder hitting than any of the others having a pace that calls to mind The Kink's "Dead End Street".  The harmony vocals clearly are indebted to the vocal style of The Association (whom one could easily envision doing the track) and there's a groovy Farfisa playing the main riff throughout the track while the solo is handled by a flute.
https://youtu.be/QUIFRJ2gMow 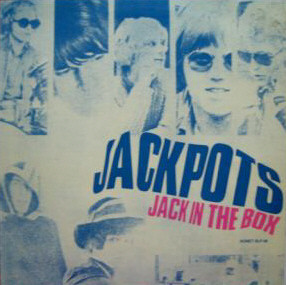 THE JACKPOTS-"Shadows And reflections" Sweden LP track "Jack In The Box" Sonet SLP-68 1968
The Jackpots could best be described as Sweden's cross between The Four Seasons and The Association. Their version of "Shadows..." is probably the most heavily produced version of all of today's selections. The band utilize their excellent harmonies to great effect and the vocals going through a Leslie speaker on the chorus is a very cool touch! 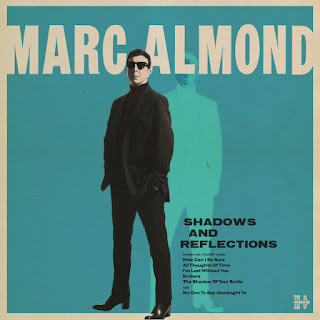 MARC ALMOND-"Shadows And Reflections" UK LP track "Shadows And Reflections" BMG 538310851 2017
Former Soft Cell front man Marc Almond not only chose to cover our track but also made it the title of his 2017 LP/CD (where it nestles amog covers of tracks by Julie Driscoll, The Herd, Dusty Springfield etc). I stumbled upon it on Spotify recently and was pleasantly blown away! Musically it reminds me of something off of one of Andy Lewis' Acid Jazz albums and rather than try to recapture Reg King's soul Marc sings it in his own way and it really works because his delivery is slow, precise and very "English".

Sadly Almer's battles with ADHD and bipolar disorder kept him from writing a lot of the time and though he continued to do so on occasion, his spark never burned as bright as it did in '66-'67 when so many pop records bore the songwriting credit of "T. Almer".
By William - December 19, 2018 No comments:

10 More Groovy (Or Not So Groovy) Small Faces Covers

1. THE BIRDS (Australia)-"Rene" Australia 45 Clarion MCK-3474 1970
Two former member's of a late era line up of Ron Wood's band The Birds (and were also allegedly members of The Clockwork Oranges) relocated to Australia where through guile or outright chicanery they started a band there called The Birds who cut three singles for the Clarion label (all of which were covers). Their second 45 was a limp version of Marmalade's "I See The Rain" backed with this reading of "Rene" from "Ogden's Nut Gone Flake". It's not very interesting because it sounds like a drunken sing-along, in every sense of the word complete with someone playing spoons, kazoo (or is it a comb and paper), jars and vocals that sounds like one of those records a footie team made in the 60's. Sadly there's no version of YouTube so you'll have to take my word for it (I heard it on a CD EP of the bands three Clarion singles).

2. TONY JACKSON GROUP-"Understanding" Portugal E.P. Estudio EEP 50 013 1967
Ex-Searcher Tony Jackson cut this raw version of "Understanding" for a rare as hell 1967 Portuguese E.P. on the primarily fado label Estudio. I daresay there hasn't been such an amazing Small Faces cover out there as this one! Interestingly the band's Dennis Thompson had played with Steve Marriott in his first band The Frantics.

3. RONNIE BIRD-"Hey Girl" French E.P. track Phillips 437.239 BE 1966
Gallic singer Ronnie Bird's weak French language version of the band's fourth single is fairly uninspired save the musical backing which at one point kicks into a Who inspired barrage of slashing guitar, thrashing drums and some Nicky Hopkin's style piano. Not the best but worth a listen.

4. TEDDY ROBIN & THE PLAYBOYS-"All Or Nothing" LP track Hong Kong "Not All Lies" Diamond SLP-1030 1967
Hong Kong's Teddy Robin & The Playboys included this competent note for note cover of the band's first #1 as a track on their debut LP. It's not at all un-listenable and reminds me of a lo-fi American garage pop reading.

5. TWICE AS MUCH-"Green Circles" UK LP track "That's All" Immediate IMCP 013 1968
Immediate record duo and in house songwriters David Skinner and Andrew Rose tackled the trippy 2nd LP Faces tune on their 2nd and final appropriately titled LP "That's All". Wrapped in beautiful orchestration it distances itself from the psychedelic whimsy of the original and transforms itself into a pop-psych masterpiece.

7. THE BARRON KNIGHTS-"An Olympic Record (Track 1)" UK 45 Columbia DB 8485 1968
The U.K.'s comedy beat group The Barron Knight's took their usual knack for re-writing tracks for laughs by changing the lyrics to "Lazy Sunday" to a tune about the Olympics. It's only about a quarter of the song itself as their numbers are usually just medley's of a variety of pop standards of the day given new words, and this ones no different.

8. THE LITTER-"Whatcha Gonna Do About It" US LP track "Distortions" Warick 671 1967
Also cut by Florida's The Evil the same year (on Living Legend 108 and a few months later as Capitol 2038) Twin Cities, Minnesota garage legends The Litter included this raw reading of the SF's debut 45 on their album "Distortions".

9. THE STILLROVEN-"Have You Ever Seen Me" US 45 August 102 1968
Minnesota's Stillroven were some of the United States most devoted Anglophiles and followed their 7 inch of a mondo obscure Simon Dupree and The Big Sound cover "Little Picture Playhouse" (August 101 in November 1967) with this track found on the SF's debut US LP "There Are But Four Small Faces". Vocally it's a bit weak as it's out of the lead singer's key but the backing is tight and the enthusiasm is 110%.

10. GEORGE MARTIN-"Itchycoo Park" UK LP track "British Maid" United Artists SULP 1196 1968
Alongside covers of tunes by The Beatles, Traffic and Procol Harum Sir George and his "orchestra" cut a cover of the Small Faces hit for his UK LP "British Maid" (titled "London By George" in the US). It's slightly muzaky but the surprising organ and regal woodwinds among the strings and horns add a "Swinging London" feel to the groovy kitsch going's on here. Unfortunately there's no video on YouTube.