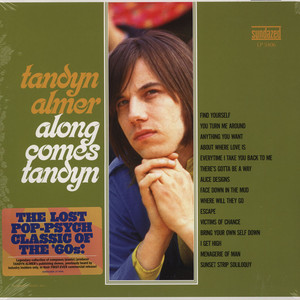 1. TANDYN ALMER-"Alice Designs"
Fresh from Sundazed records new compilation LP/CD of demo's by the tunesmith behind many a great song ("Along Comes Mary" and "Shadows And Reflections" among them) comes this number (cut first by the Sugarbeats in the U.K. and Mr. Lucky & the Gamblers a bit later in the States).  The liner notes admit that it was Almer's ode to Lysergic Acid Diethylamide (and also that "Along Comes.."  really was indeed a homage to, you guessed it, weed). Regardless it's one of his best tunes with some great hooks.

2. THE VAMP-"Floating"
Best known for being a stopping place for ex-Pretty Thing Viv Prince (post Bunch of Fives), the band's name was an acronym for all of it's members (Viv Prince, Andy Clark, Mick Hutchinson and Pete Sears). "Floating" is a dreamy bit of fun delivered in a monotone by an ambivalent sounding distinctly English voice over an inoffensive groove.

3. THE JIVE FIVE-"What Time Is It?"
Wow, some folks might call this "doo wop", others might pretentiously make excuses for the latter and call it "early r&b".  I don't care for holes to stick a peg in when it's this freaking amazing, the precise multi layered harmonies, the finger snapping, the chimes and that bass vocal.  Wiggy. 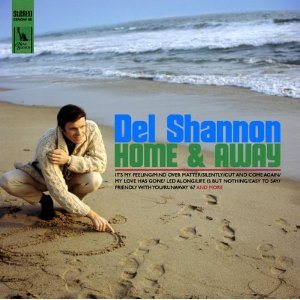 5. DEL SHANNON-"It's My Feeling"
How the fuck did I go through life without hearing Del's "Home And Away" LP until now? Amazing stuff, of course it was cut in London (at Olympic to be precise) in '67 produced by A.L.O. with help from various Immediate records folks (there's even 3 Billy Nicholl's cover on it, "Cut And Come Again", "Led Along" and "Friendly With You").  Magical orchestrated pop!

6. THE MONKEES-"Pleasant Valley Sunday"
For Xmas of 1975 my favorite aunt honored my request for a Monkees record by duly providing a copy of this 45 (in a picture sleeve) that it later transpired came from a co-worker which I played the grooves off of.  Whenever I hear it I am catapulted back to the care free days as a 9 year old with a care in the world. Contains possibly one of the most interesting lines "mothers complain about how hard life is and the kids just don't understand". In the video from their TV show promoting the track it's quite obvious the rot has set in by the look of contempt and ambivalence on all their faces.

7. THE FLINTSTONES-"Work Out"
Cut at a time when the U.K. 60's instrumental music craze was about to be swallowed whole by the twin onslaught of beat music and r&b this track is kicked in by a solid snare facing off with a dual bass, guitar and sax lick that combines Ventures style instrumentation meets Cannonball Adderley's horn section.

8. THE TIMES-"I Helped Patric McGoohan Escape" ("Splash Of Colour" version)
Thank you Debbie Jones wherever you are my 80's U.K. pen pal for turning me onto The Times.  Back in the day every time I went by my friend Dave's house I'd leave with two LP's, a double EMI LP called "Merseybeat" and a compilation of 60's influenced 80's bands from the U.K. called "A Splash Of Colour" featuring this superior version of The Time's excellent 1983 single.

9. THE PEDDLERS-"The Lost Continent"
This track from this jazzy U.K. 60's trio's LP "Three In A Cell" has two of my favorite ingredients: Hammond and sweeping strings.  The whole thing swings from start to finish and believe me it really works!

10. THE WALKER BROTHERS-"Love Her"
This one makes the hairs on the back of my neck stand on end . Wow. Magic. Is there more of a somber, downtrodden defeatist song as this?  I think not. This was the record that introduced the U.K. to these bewigged Yanks, and its of course pretty much Scott Walker which is never a bad thing since he was, in my book, The Walker Brothers.  This number always brings back a flood of very personal memories and is one of those songs that encapsulates a moment in time that will forever be associated with it.  For special friends everywhere. "Be the guy that I couldn't be, and love her, love her for me...". 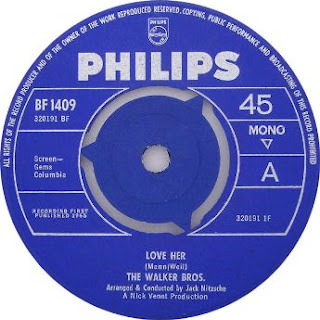 
The Roulettes were one of those bands who sadly never had the hits they deserved.  When the changing tide on the British music scene occurred in '66 or so even the beat groups with hits  weren't able to adapt (exceptions being of course, The Beatles and The Hollies).  They sadly wasted away on the panto circuit with Adam Faith (with whom they had a dual career backing on recordings until late '65 and still accompanying him onstage after). Members Russ Ballad (guitar) and Bob Henrit (drums) were part time members of Unit 4 + 2 (becoming full time members after this single's failure). By the end of 1966 The Roulettes ended their 8 single stretch on EMI's Parlophone without a hit to their credit.  They signed with Fontana in early '67 and released "Rhyme Boy Rhyme" b/w "Airport People" (TF 822) in April of 1967.  It sank without a notice.

In October they released what would be their last 45. Unlike the un-spectacular, innocuous pop sounds of their preceding Fontana 45 this one actually sounded "with it". "Help Me To Help Myself" sounds very much like the Unit 4 + 2 and their penchant for harmonies on their '66-'68 material. The number starts with some trippy period phlanged piano and is carried by some subtle muted trumpet (straight out of some mid 60's U.K. TV show and culminating with a solo accompanied by some guys impersonating a trumpet by humming)) and the band's precise poppy harmony vocals.  It's a great departure from their beat sounds and an improvement on their M.O.R. pop of the preceding Fontana 45.

"To A Taxi Driver" is sadly not as exciting, it's okay but more of a mid tempo mundane exercise. Written by Unit 4 + 2's Tommy Moeller and Brian Parker (interestingly their previous single had a B-side called "Airport People" as mentioned earlier, were they on a "public transport" song kick?).  It's got these muted trumpets that sound like something you'd hear on a Les Reed score and has this lazy Ray Davies '67 B-side feel punctuated by these backing vocals that periodically chant "Taxi driver!" multiple times.

"Help Me to Help Myself" was comped on Psychic Circle's "Fairytales Can Come True Volume 1" (the best of the series on my book), whilst "To A Taxi Driver" is still unreissued to my knowledge.

Hear "Help Me To Help Myself":