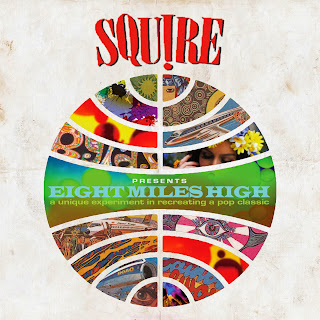 1. SQUIRE-"Eight Miles High"
The release of the Summer will surely be Squire's new 45, a cover of the Byrds classic.  Now I'm a firm believer in the old "don't fuck with the classics" adage but Anthony Meynell and Co. have pulled off an amazing feat by cutting a magic version of it by sticking to the original formula but adding little bits that keep it clear of a note for note version.  Get yours today by going here (where you can also hear it)!

2. SCREAMIN' JAY HAWKINS-"I Hear Voices"
My fave track by Screamin' Jay is not "I Put A Spell On You" but this spooky dirge from 1962 (originally released on the Enrica label). 4 years before John's Children's "Smashed Blocked" comes this illustration of madness aided by all sorts of hoodoo voodoo noises, a high pitched Yma Sumac style voice piercing it all behind a pretty straight forward bluesy shuffle. It was also released in the U.K. on the legendary Sue label (WI 379). 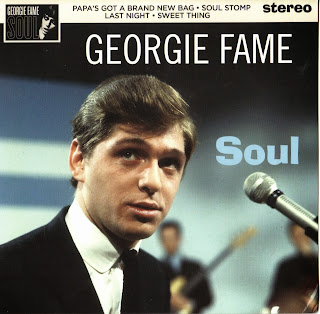 3. GEORGIE FAME & THE BLUE FLAMES-"Sweet Thing"
This year's Record Store Day scam included some interesting releases such as this 4 song 33 1/3 Georgie Fame E.P. on Polydor featuring 4 cuts from 1966 (including a cover of "Soul Stomp" which makes it's very first vinyl appearance) as well as this stellar version of The Spinners track from his 1966 U.K. LP "Sweet Things".  The back sleeve states that there will be a CD/LP box set of Mr. Fame out this Summer! Maybe he'll tour to promote it an snub mods of all ages everywhere....

4. MANFRED MANN-"I Got You Babe"
I've always been a sucker for Manfred Mann's jazz instrumentals and none is more swinging than this take on the Sonny & Cher bullshit protest from their incredible E.P. of jazzy versions of pop hits "Instrumental Asylum" (U.K. HMV 7EG8949, June 1966) and later compiled on their "Soul Of Mann" LP (a collection of Paul Jones era Manfreds jazz instrumentals).

5. DEEP FEELING-"Pretty Colours"
Dave Mason (lead vocals) Jim Capaldi (drums), Luther Grosvenor (guitar), Poli Palmer (flute/vibes), Gordon Jackson (guitar) and Dave Merideth (bass) were Deep Feeling, a brief post-Hellions/ pre-Traffic group who never released any records but have a host of unreleased tracks in the vaults from a session for Giorgio Gomelsky cut in 1966 including this often comped bit of brilliance that melds freakbeat with hallucinogenic vibes that sounds a lot like The Action circa "Brain/Rolled Gold". 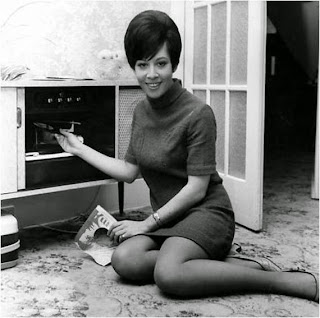 6. HELEN SHAPIRO-"Walk On By"
I've always thought Helen's version of "Walk On By" was the best (well maybe neck in neck with The Stranglers version....). The arrangement easily bests any Dusty Springfield session from the same period and Helen's husky/smoky vocal delivery is perfectly suited for it and she really does some justice.

7. THE PICCADILLY LINE-"Rosemary's Bluebell Day"
This bonus cut from the reissue of their legendary CBS (U.K.) 1967 album "The Huge World Of Emily Small" has all sorts of snatches of influences to my ears: The Who, Pink Floyd, Zombies etc and was extremely ahead of it's time and joins the ranks of so many other 3 figure value rare 60's U.K. LP's that got over shadowed by the likes of "Oddysey And Oracle" and "Tangerine Dream".

8. MICHAEL LESLIE-"Make Up Or Break Up"
One of the many high points of Castle's best volume of their "Doin' The Mod Series" Volume 4 "Ready Steady Stop!" is this monstrous cut from 1965 (Pye 7N.15959). It's a glorious cacophony of fuzzed out guitar riffs, heavy Kink's type chord bashing, high Action style backing vocals, distorted sax (or is it a kazoo?!) and perfectly straight lead vocals . Penned by the famous Pete Dello in tandem with Grant Tracy. Have a listen and be blown away that there were records of this freaky intensity being recorded in '65 in England without Joe Meek's involvement.

9. THE TAGES-"Created By You"
Somewhere between Kaleidoscope (U.K. sort), The Beach Boys "Pet Sounds" and The Bee Gee's comes this trippy/sunshine pop slice from the Tage's incredible 1967 LP "Studio" with folky woodwinds and an over the top pop psych production (phlanged piano, minor chords the kitchen sink etc).

10. THE LIVERPOOL SCENE-"Batman Poem"
A great pisstake on the "Batman" theme by ultimate pranksters The Liverpool Scene with lyrics about Vietnam and (in this live version) their fave football club, Liverpool. 'Nuff said.


The Swinging Summer of '66 (July to be exact) saw The Alan Bown Set, a 7 piece London lot of r&b musos release their third imprint on Pye records. The Alan Bown Set were known as one of those many acts like The Action and The Graham Bond Organization who were a "band's band" with a heavy club reputation and absolutely zero chart presence despite a continuous string of singles.  The band at the time of this release were: Jess Roden (lead vocals),  Alan Bown (trumpet), Jeff Bannister (keyboards), John Heliwell (saxophone and later in Supertramp!), Pete Burgess (bass) and Vic Sweeny (drums).

Edwin Starr's "Headline News" ( U.S. release April 1966 on Ric-Tic RT-114) was their latest stab.  Despite being a cover, "Headline News" works thanks in no small part to Jess Roden's powerful voice and the solid as gold brass section sticking pretty much to the arrangement of the original.

"Mr. Pleasure"sees keyboard player Jeff Bannister taking the lead vocals.  It's a soulful affair punctuated by the band's horns and reminds me of one of the poppier soul tunes that The Foundations would be doing for the label a few months later. 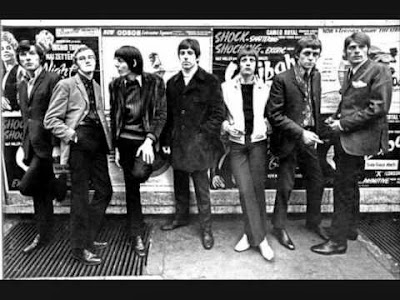 Both sides were compiled on the Castle Alan Bown Pye anthology "Emergency 999" and "Headline News" was also featured on the final volume of their "Doin' The Mod" CD compilation series "That Driving Beat Volume 5".

Regardless of the title the A-side is a Janis Ian composition from her debut LP (there was also a U.S. cover of it by Danny Warner on the Smash label S-2110 in September 1967). The Shame rock it up substantially more than the original retaining the cynical lyrics but wrapping it up in some cool '66-'67 harmonies with some cool hooks (fuzzy raga guitar licks)  with some sitars creeping in half way through.

"Dreams Don't Bother Me" starts out with some churchy organ and progresses into a mid tempo pop number that reminds me of Marmalade or The Tremeloes in one of their more upbeat moments. Not nearly as good as the topside but worth it just the same. 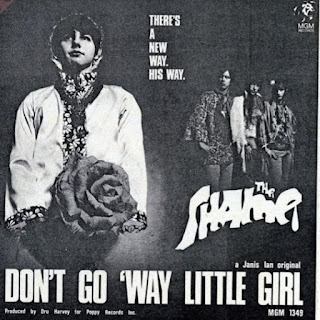 Greg Lake handled the lead vocals and after the Shame went their separate ways he found employment in The Gods before decamping to form The Shy Limbs with former Shame keyboard player John Dickenson (who wrote the flip side of this 45).  If anyone else can tell me who the other members were I'd be quite appreciative.

The A-side was issued on "New Rubble Volume Six: Painting The Time" and on the highly recommended 3 CD box "Love Poetry And Revolution" but the flip has yet to surface anywhere that I am aware of.