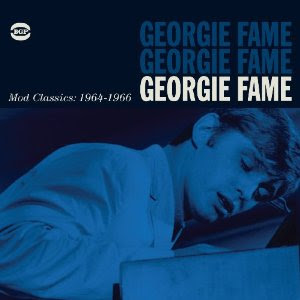 I rarely spend much time here these days writing. When I do write it’s rarely about a new release and usually committed to writing about a seven inch that’s at least 40 years old. Well my friends the latest Georgie Fame CD compilation, “The Mod Classics: 1964-1966” (BGP/Ace Records) has blown my mind in such a way that I feel I cannot let it go without a word or two. I am neither in the employ of Ace records nor do I even benefit from any freebies from them so what I write comes truly from the feeling that all of you out there in Anorak-Land need to own this, pronto. 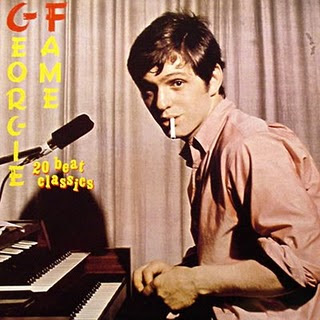 "20 Beat Classics":
Where it all started for most of us.

My introduction to Georgie Fame came on Christmas Day 1984 when my parents bestowed upon my sister and I a VCR. I duly went to the local supermarket (which was open on Xmas Day!) and rented one of the “Ready Steady Go!” VHS compilations and on it was Georgie Fame and The Blue Flames belting out a live, no holds barred version of their 1965 hit “Yeh Yeh”. I was blown away. Amazing stuff, from Georgie’s cool do, to his cheeky possibly stoned grin while singing and simultaneously playing his Hammond while a multi racial band backed him solidly. A few days later a friend presented me with his dad’s well worn U.S. 45 copy of “Yeh Yeh” on Imperial. The quest had begun. a track here and there on cassette’s followed from friends and by 1985 me and just about every other mod I knew on the East Coast had procured a copy of the R.S.O. Georgie Fame compilation LP “20 Beat Classics” from Midnight Records on 23rd Street in NYC. The comp spanned his brilliant U.K. Columbia sides from 1964-1966 sending me off to secure copies of his first two U.S. LP's on Imperial: "Yeh Yeh" and "Get Away". The rest was and still is, history. “20 Beat Classics” was reissued on CD in the early 90’s and till the arrival of “The Mod Classics” it was the only legit CD release of any of Georgie’s U.K. Columbia material (exception being the now difficult to find German 3 CD compilation “box set” if you will, “The In Crowd” and various budget CD comps of the same recycled tracks). Of course the highly dubious Rockin’ Beat label put together some beautiful sounding CD reissues of all of Georgie’s 60’s LP’s all with bonus 45/E.P./ureleased tracks about 6-8 years ago and his CBS years (post 1966) have been well represented with both his LP’s “Two Faces of Fame” and “The Third Face Of Fame” being reissued on CD as a double packaging by B.G.O. and various CBS groovers were compiled on “Somebody Stole My Thunder: Jazz Soul Grooves 1967-1971”. Finally someone has gotten around to plumbing the archives for the Columbia ’64-’66 stuff. Compiled and thoroughly annotated (with lots of great photos, 45, LP and E.P. scans) by Dean Rudland “The Mod Classics” not only looks great, it sounds great. Dean and Co. have left off the “hits” and went straight to lesser known singles, LP and E.P. cuts. Sadly absent are any of Georgie’s ska tracks, but the liner notes seem to indicate there is still hope that these will be dealt with another day. The tracks are as follows:
1. It's Got The Whole World Shakin'
2. Papas Got A Brand New Bag
3. El Bandido
4. Dawn Yawn
5. Get On The Right Track Baby
6. Lovey Dovey
7. See Saw
8. Soul Stomp
9. World Is Round, The
10. Monkeying Around
11. Sweet Thing
12. Something
13. Point Of No Return
14. Lil' Darlin'
15. Funny How Time Slips Away
16. Preach And Teach
17. Parchman Farm
18. Move It On Over
19. Last Night
20. Music Talk
21. Sick And Tired
22. Outrage
23. Monkey Time, The
24. Work Song 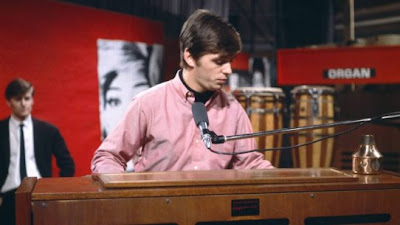