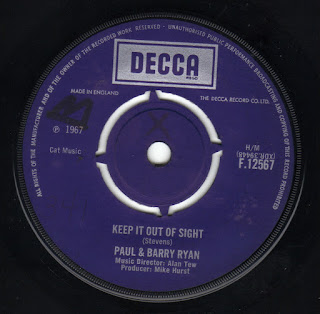 1. PAUL & BARRY RYAN-"Keep It Out Of Sight"
My favorite single by the Ryan twins will always be this amazing psych pop opus composed by Cat Stevens. It's key is the incredible orchestration (care of Alan Tew) that sounds like a cabaret supper club dosed with acid. Magic!

2. THE TAGES-"Created By You"
From their masterpiece album "Studio" (recorded  in the UK), this poppy little number by my favorite Swedes is laced with Beach Boys harmonies, freaky woodwinds, a Bee Gee's style lead vocal vibrato and quirky pop-psych orchestration.

3. WAYNE GIBSON-"Under My Thumb"
Cut originally in '66 this Stones cover sank like a slab of concrete before it was resurrected on the Northern soul scene which led to it re-entering the hit parade in 1974 where a reissue reached #17 on the UK charts. It's catchy and infectious with a groovy repetitive keyboard bit that's completely rivetting.

4. JOHNNY "HAMMOND" SMITH-"A Portrait Of Jennie"
From his 1960 New Jazz LP "Talk That Talk" comes this moody, brooding piece of B-3 Hammond genius, perfectly mellow and slick. Sadly there's no clip on YouTube. 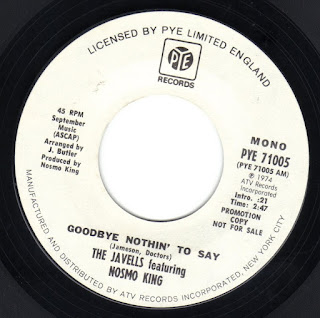 5. THE JAVELLS featuring NOSMO KING-"Goodbye (Nothing To Say)"
For the past three decades I've disliked this number and thought it was a dreadful Northern Soul cash in. It's still a cash in but something about it appeals to me now, not quite sure why! Curiously it sounds much like Maxine Nightingale's monster hit "Right Back Where We Started From" which came a year later.

6. THE BEE GEES-"Such A Shame"
Hidden away on their 1968 LP "Idea", "Such A Shame" sounds like something much earlier with it's beat group harmonies and harp blowing and it's "la da de dah" chorus is pure merseybeat.

7. ENOCH LIGHT & THE GLITTERING GUITARS-"You Showed Me"
From the bizarre 1969 album "Enoch Light And The Glittering Guitars" comes this freaked out version of "You Showed Me" led by fuzz guitar. Imagine Al Caiola on L.S.D.......

8. THE CLASH-"Working For The Clampdown"
It's hard to believe "London Calling" will be 40 next year.  So many of it's numbers still ring true 39 years later and none more so than this warning of fascism growing in the proletariat. 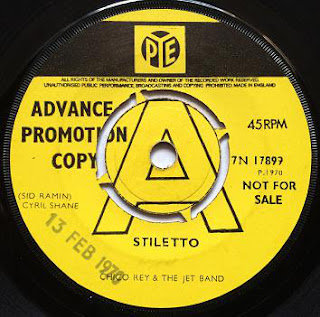 9. CHICO REY & THE JET BAND-"Stiletto"
This kitschy and amazing instrumental was a rare 1970 Pye 45 that was unearthed on the highly recommended 1995 CD compilation "The Sound Spectrum". Full of fuzz guitar, razor sharp brass, funky organ and an over the top production it's nothing short of brilliant.

10. THE TOGGERY FIVE-"Goin' Away"
According to YouTube Graham Gouldman wrote this for The Hollies. They never cut it (well if they did it hasn't surfaced). The Toggery Five cut it but that too went unreleased, but somehow someone got it to YouTube for all to enjoy.