Stevie Wright from The Easybeats has passed away. There's no better fitting tribute than this dynamic live set from Germany's "Beat Beat Beat" from 1967:

We're dispensing with December's picks before month's end like we do every year so that we may get on with the holidays....

1. THE DUKES OF STRATOSPHEAR-"The Mole From The Ministry"
Recorded in 1985 by XTC members Andy Partridge, Dave Gregory and Colin Moulding (along with Dave's brother Ian on drums) their debut mini LP "25 O'Clock" was cut using vintage musical AND recording equipment at a small Christian recording studio.  The results of this "fake" band were microdots beyond any "real" so called "psychedelic" bands as this cross between "I Am The Walrus" and "We Are the Moles" will tell you.

2. BUSTER'S ALL STARS-"Sounds And Pressure"
Easily the most soulful thing Prince Buster ever did, this 1967 LP version (previously issued as a Blue Beat 45 credited to Buster All Stars but is actually Hopeton Lewis, BB 372 ) eschews his usual  groove for something far more r&b than ska or rocksteady with call and response vocals and some professionally recorded brass.

3. STATUS QUO-"Gentlemen Joe's Sidewalk Cafe"
I often forget about a lot of 60's bands.  Status Quo are among them.  They have but one brilliant LP and a handful of singles before the center partings and paisley foppery gave way to denim and 10 minute jams. This simple but catchy slice of Farfisa fueled pop more than redeems them in my book. It was also the flip side to their debut 45 "Pictures Of Matchstick Men".

4. THE SALVADORS-"Stick By Me Baby"
Having a zillion Northern soul compilation CD's and LP's and the fact that the genre is pretty played out and overrated in my opinion I suppose I can be excused for overlooking/ignoring this one which I have evidently had on a comp for eons.  It wasn't until my Philly rude girl pal Sara hipped me that the film "Northern Soul" was on Netflix streaming and I watched it and was cottoned to this up tempo stormer.  In true Northern Soul fashion an original will set you back $1,500+ according to popsike.com.

5. SONNY BOY WILLIAMSON-"Santa Claus"
Merry Krimbo all of you, here's my fave Xmas track of all time from the froggy, gravely throat-ed Sonny Boy Williamson. The moral of the story, stay out of the ladies (dresser) drawer(s).... 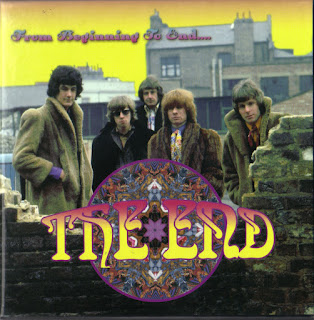 6. THE END-"Loving Sacred Loving"
Bill Wyman's psychedelic protegees decamp from their mod/soul career in Spain back to England to cut a monster LP ("Introspection") during down time on the Stones "Satanic Majesties" album sessions with Mr. Perks twiddling the dials. This was issued as the flip to their first offering of the sessions March '68's "Shades Of Orange" (Decca F 22750).  Those of you who follow this blog will no doubt tire of me proffering this suggestion but with the way these tracks sound just imagine the '67 Stones output if they'd let Bill produce instead of A.L.O. or themselves?! The new 4 CD end box set contains no less than three versions!

7. THE ROLLING STONES-"Pay Your Dues"
This track was later given new lyrics and became "Street Fighting Man" but a cursory listen to this track and you can hear the instrumentation (especially Keith's acoustic guitar recorded through a portable cassette player) so much better than the normal finished production. 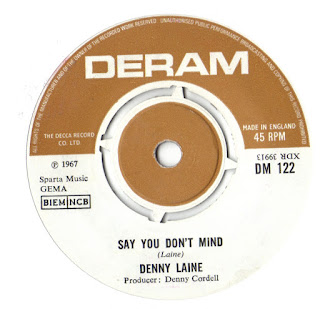 8. DENNY LAINE-"Say You Don't Mind"
Eight months after bidding The Moody Blues farewell Denny Laine released his brilliant solo debut on Deram.  "Say You Don't Mind", with it's full on Denny Cordell production is nothing short of a baroque pop masterpiece and is everything you'd expect from a '67 Deram 45 with woodwinds, string section and funky background with the bass and Denny's Spanish guitar flourishes chugging along.  It's alleged there's an entire LP worth of unreleased Denny Laine Deram era material out there. One can only hope. 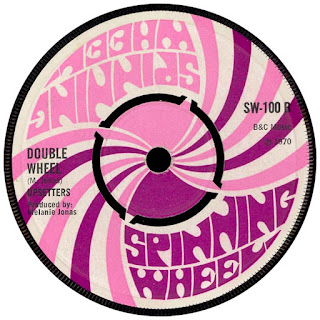 10. DAVID BOWIE-"Heroes"
I recently read the amazing "Bowie In Berlin: A New Career In A New Town" by Thomas Jerome Seabrook and it sent me on a path to rediscovering my second fave Bowie period (my first being the 60's). And I had all but forgotten how I love the fuck out of this song, from it's freaky musical backing, the powerful lyrics and Bowie's emotional delivery it's all there.


The Riot Squad cut 7 singles in the U.K. for the Pye label in the 1960's, the last  five were produced by the legendary Joe Meek. Three of the band's 45's gained U.S. releases on three different labels, the last two were Meek productions.  Today's subject (recorded in Meek's apartment at 504 Holloway Road on March 14, 1966), is in my estimation  is the strongest of all the band's Meek produced material. It was their last U.S. 45 released in July 1966 on the always eccentric  Hanna Barbera Records label (who in between releases from their cartoons put out 45's by garage teens The Guilloteens, The Five Americans, "The Avengers Theme" by Laurie Johnson and U.K. artists like The Epics and Jimmy James & The Vagabonds among others).

"I Take It That We're Through" kicks in with some over the top bass/fuzz guitar on the intro before adding a combo organ and sax that mesh perfectly.  The vocals have the all too familiar sound technique used by Meek and remind me of several Honeycombs sides.

The tour de force continues on the B-side with "Working Man" that utilizes the sax/organ mix and a great fuzz bass/guitar lick at the end of each chorus and a gritty guitar solo worthy of Meek's previous release "Crawdaddy Simone" by The Syndicats.

The bands ever shifting line up for this 45 was: founding member Bob Evans (sax) and Nero Gladman (vocals), Terry Clifford (guitar), Butch Davis (organ), Roger Crisp (bass) and Del Roll (drums). The latter five musicians reconstituted the band in a 1965 reshuffle with Evans being the only original band member and appeared on all five of the group's Meek produced 45's. Both sides were credited to "The Riots".

Both sides are available in a variety of places, notably Sequel's 2003 CD compilation "Jump".  The A-side cropped up on Sequel/Castle's 1991 CD "The Joe Meek Story: The Pye Years" and on their 2006 CD "Joe Meek Freakbeat" while it's flip wound up on their 2002 "Doin The Mod" series on "Volume 4: Ready Steady Stop!".

Hear: "I Take It That We're Through":

After seeing the Zombies perform  "Odessey And Oracle"   awhile back I got to thinking about 60's covers of Zombies tracks which eventually became a challenge to compile. Never one to shirk a musical challenge I set about picking ten from around the world. I could have easily just done ten U.S. 60's garage covers of Zombies songs (where it seems the Zombies rated behind The Stones and Yardbirds for "most covered British Invasion tracks") but to keep it diverse I went with bands from all over the world. Enjoy! 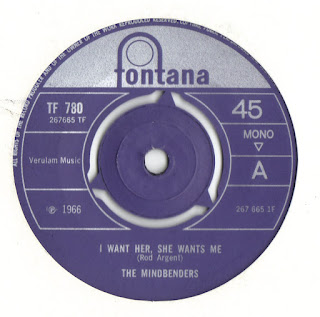 1. THE MINDBENDERS-"I Want Her She Wants Me" U.K. Fontana TF 780 1966
Beating The Zombies version on "Odyessey & Oracle" to a release by nearly two years The Mindbenders version differs because it's more sparse then the Zombies with lead singer Eric Stewart's voice pushed to the front of the mix and far less keyboards than the later version.

2. ROBBIE PETERS-"She Does Everything For Me" Australia Festival FK-2156 1968
Released almost a year to date of the Zombies original (released Downunder as Decca Y7355 as the flip to their final Decca era 45 "Goin' Out Of My Head") this Australian cover is a pounding, frantic freakbeat treatment ramped up 100 mph that doesn't let up.

3. THE LIVE FIVE-"I Must Move" U.S. Piccadilly 236 1967
This obscure U.S. cover by a band from Salem, Oregon starts off sounding like something entirely different, indeed the middle and the organ solo bear little resemblance to the original so it's quite unique. The band sing "I must go" by accident once instead of "I must move" in one part leading me to wonder if they'd heard Phoenix, Arizona's Phil & The Frantics re-write "I Must Go" (Rabbit 1219 1966)?  High marks for originality in NOT doing a note for note version.

4. LOS CHIJUAS-"Te Quiero (I Love You)" Mexico LP track untitled LP Musart 1389 1968
Mexico's Los Chijuas are responsible for an untitled rare as hell LP that is so obscure collectors debate whether it's from 1968 or 1969 because no one seems to know.  Among the slew of Spanish language versions of contemporary covers on the album is a cover of "I Love You".  Presumably learned from the San Jose, California band People who scored a top 20 hit with a version in the States in '68 with a Santana-esque treatment as this version owes quite a bit to their version.

5. THE MASCOTS-"Woman" Sweden Decca F 44512 1966
Along with The Who The Zombies were huge in Scandinavia, Sweden in particular where a rare as hell untitled Decca LP was issued (Decca LK 4843) in 1966 where this track first saw it's Swedish release. The Mascots version actually surpasses the original in my book because it melds the original numbers beat punchiness with some great r&b style rave ups. 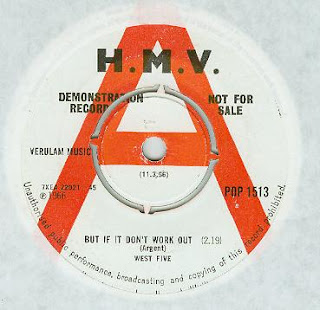 6. THE WEST FIVE-"If It Don't Work Out" U.K. HMV POP 1513 1966
Rod Argent wrote "But If It Don't Work Out" with Dusty Springfield in mind and she gladly accepted cutting a version which appeared on her second British long player "Ev'rything's Coming Up Dusty" released in October 1965 (Phillips RBL 1002). In March '66 the beat group The West Five issued their version on a 45 which bears closer relation to the Zombies version thanks to it's strong drums and piano accents. In fact I daresay I prefer this to the original thanks to it's stronger feeling.

7. MARTY RHONE & THE SOUL AGENTS-"What More Can I Do" Australia Spin EK-1383 1966
Next to the United States Australia held the record for largest amount of Zombies 60's covers (oddly there were just three in the U.K., two versions of "But If It Don't Work Out" and an instrumental called "Shadows" issued by The Second City Sound). This version of "What More Can I Do" sounds much like an American garage 45 thanks to it's tough guitar, lo-fi production and combo organ.  The vocals are polished and clash with the gritty but wonderful racket the band kick up.

8. THE BUCKINGHAMS-"You Make Me Feel So Good" U.S. USA 860 1966
Covered in the States by at least half a dozen other bands (The Sonics, The Gentrys, Kenny & the Kasuals to name but a few) this version was the flip of The Buckingham's November 1966 #1 U.S. hit "Kind Of A Drag".  It sticks fairly close to The Zombies original but succeeds because the musical backing, like most U.S. Zombies covers is much more raw (and I like the guitar solo much more than the original).

9. OLA & THE JANGLERS-"She's Not There" Sweden Gazel C-159 1965
Sweden's Ola & The Janglers were the first Swedish 60's band to cover the Zombies.  I'm a big fan of Ola & The Janglers but I'll have to admit this version is pretty awful.  The backing is pretty spot on but the vocals sound so incredibly twee that it makes me wonder if they were doing a piss take ala Ian Whitman's "You Turn Me On"? Worth it only for the Door-sy organ solo. 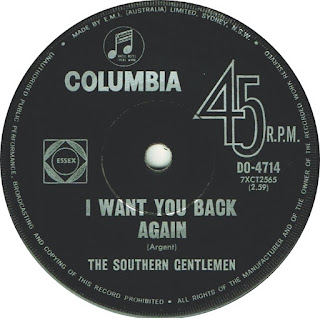 10. THE SOUTHERN GENTLEMEN-"I Want You Back Again" Australia Columbia DO-4714 1966
The flip side of "A Wondrous Place" by Australia's Southern Gentlemen benefits from some fuzz vibrato effect which thoroughly negates the normally jazzy feel that this track (which oddly was never issued in the U.K. by The Zombies but saw a 45 issue in the USA, Canada, Australia etc) but it still swings.  Sadly there's no clip on YouTube at the moment.