Like The Who's "Substitute", "My Name Is Jack" had it's lyrics edited for a US release with the tasteless line "Here comes Super Spade who really puts it on" changed to "Here comes Superman".  Probably not one of my faves, it's a piece of pretty disposable pop music about life in an orphanage ("in the Greta Garbo home for wayward boys and girls"). It's totally inoffensive but just so syrupy sweet that it hurts my teeth to listen to it more than once.  There's some neat harmonies it in but.... 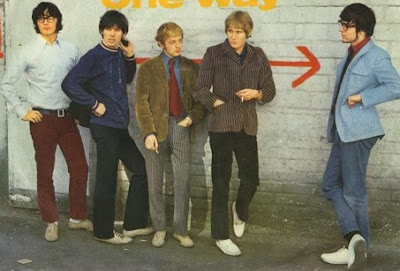 Bass player Tom McGuinness's "There Is A Man" brings up the flip. It's a freaky little ditty about a guy in an asylum who hallucinates seeing a man who follows him around ala The Who's "Whiskey Man", only far more sinister thanks to some almost Pink Floyd-ish spacey musical backing!! 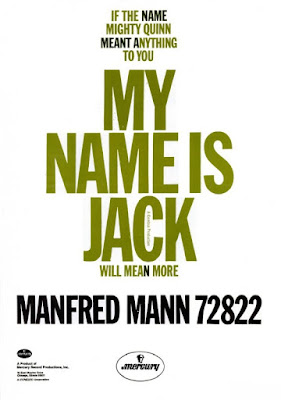 
Back in the mid 90's word across the Atlantic was filtering across from US modernist globe trotters that DJ's in the U.K. were breaking free from their usual "US soul/r&b only" mode and spinning all sorts of previously "taboo" sounds, many of them were from their own soil.  Among them was this gem by the Dave Clark Five originally released in October 1967 on the flip of the slushy "Everybody Knows" (#2 in the UK charts), "Concentration Baby" and its sudden popularity saw its price spike considerably by the late 90's, until it apparently fell out of favor (no such luck with Timebox's reading of "Beggin'" which is STILL in demand). 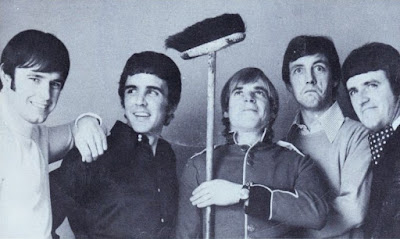 The A-side, "Everbody Knows" (not to be confused with a Dave Clark/Lenny Davidson original from 1965 of the same title, Columbia DB 7453) is a schlocky crooner written by Les Reed and Barry Mason and interestingly sung by guitarist Lenny Davidson.

Both sides are available on the indispensable DC5 double CD collection "The History Of The Dave Clark Five".

Hear "Everybody Knows" (and cringe):


The Herd, a UK pop/psych quartet were by 1969, on their last legs. Their lead singer and guitarist "The Face of '68" (as he was dubbed by the magazine "Rave") Peter Frampton decamped to form Humble Pie with ex-Small Faces front man Steve Marriott leaving the band to carry on as a trio with Andy Bown (vocals, keyboards), Gary Taylor (bass/vocals) and Victor Spinetti (brother of actor Henry, on drums). They limped on for one last single, "The Game" which was issued in the U.K. as Fontana TF 1011 in April 1969, it was issued the following month in the US. It failed to chart and the U.K. and predictably did nothing in the US.

"The Game" is a piece of brass backed pop floss, it's not awful but it's so mundane and verges on inane bubble gum so much that I really never want to play it again. The lead vocals are (presumably) by Gary Taylor. Next!

"Beauty Queen" should have been the A-side!  Sung by Andy Bown it's an uptempo little number with a rocking groove and amusing lines like "Beauty queen where have you been? Been to the Ivanhoe to see the Cream?". The dual attack of guitar and keyboards fatten the sound up add to my earlier mentioned comment that it should have been the A-side! The band splintered shortly after the record's flop with Bown and Spinetti joining former Amen Corner horn section members as Judas Jump. After that Bown eventually wrote and performed the theme song to the UK TV show "Ace Of Wands" in 1970, the amazing and highly collectible Mellotron freakout "Tarot".

Both sides are available on a host of Herd CD compilations available out there. We recommend the most recent "The Complete Herd: Singles A's & B's".