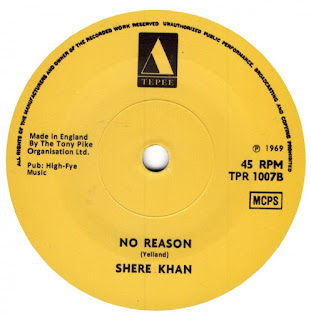 SHERE KHAN-Little Louise/No Reason U.K. TeePee TPR 1007 1969
Occupying the #1 spot on my 45 rpm want list is today's subject, a one off U.K. single by a studio only concoction called Shere Khan. I don't own the original but I own a bootleg copy (pictured above) and seeing as a beat to hell copy went for $422 on Discogs awhile back (after being up for grabs for less than 24 hours) I think it unlikely to ever own an original pressing.  Shere Khan was the vehicle of Frank Aiello, a former member of the U.K. duo The Truth (who split in 1968 after issuing their last single, a cover of The Rascal's "Seuno" as Decca F 12764 in April 1968). Interestingly Aiello has no recollection of the record or the session!
"Little Louise" was first unearthed by Rob Bailey on one of his "Le Beat Bespoke" CD's (Volume Two to be exact). It's fairly mundane, though the interesting backing of heavy kitschy sounding brass mixed with fuzz guitar is fairly intriguing and the arrangement is catchy the song itself does nothing for me.
The gold, for me, is on the flip. "No Reason" is a full on fucking mind blast! Cloaked in an array of horns that sound straight out of the soundtrack of some late 60's British film they are also reminiscent of the brass on The Pretty Thing's "Emotions" LP, but on speed!! Roll that up in blistering fuzz guitar and a frantic pace the whole thing comes off as a freaky version of Paul & Barry Ryan with the trumpets/sax darting in and out of the complex arrangement. The double tracked vocals are both soulful AND trippy creating a wall of psychedelic pandemonium!
Both sides were collected on a Truth CD compilation "Who's Wrong: Mod Bedlam 1965-1969".
Hear "Little Louise":
https://youtu.be/rt-b3HlDUGQ
Hear "No Reason":
https://youtu.be/_hlLq2L32Rk
By William - May 27, 2021 No comments:

Today's subject is an off the wall Antipodean freakout that was first brought to my attention on the 1992 Rubble CD collection "Rubble 11". As with lots of tracks on the "Rubble" series I wrongly assumed it was British!
"The Real Thing" was first issued in Australia in March of 1969 with "Parts One and Two" on the A-side as Columbia DO-8710 where it reached #1 on the national charts (it was issued in Britain in a similar fashion in September 1969 as Decca F 22964). For it's American release in June "Parts One And Two" were separated into two individual tracks one on each side, and it's flip "It's Only A Matter Of Time" was discarded. For the artist, 21 year old Australian Russell Morris, it was his debut release.
For the uninitiated "The Real Thing" is a mind-blowing experience drenched in phlanging/phasing. Starting off with some mellow phlanged acoustic guitar it only take a mere before the number begins it's journey into the Way Out. It's hard to catalog all of the bizarre things going on in this record from buzzing/fuzzed out/backwards guitar licks that weave in an out, the frantic piano trills (that remind me of The Stones "We Love You") to the oscillating psychedelic effects on the drums weaving a hypnotic groove. Towards the end an eerie chorus of children can be heard singing in another language after air raid sirens (I've always maintained that they're singing in German) and I could swear it ends with them shouting "Sieg Heil!" just as the sound of an explosion comes in bringing the record to a fade out. Perhaps a bit TOO trippy?!?! 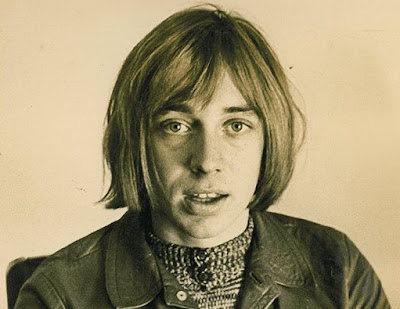 "The Real Thing" has been comped in a variety of places, namely Bam Caruso's  "Rubble Volume 18: Rainbow Thyme Winders" and "We Can Fly Volume Four".
Hear "The Real Thing":
https://youtu.be/wylEB-P76nA
By William - May 20, 2021 No comments:

To most American's the Date label will always be famous for releasing the Zombies "Oddysey And Oracle" LP in the U.S. and it's subsequent smash single "Time Of The Season". The label released music from a variety of genres and prior to The Zombies "hit" in 1968 they had released lots of other British singles by Brian Poole, British based Walker Brother Gary Walker, The Love Affair and today's specimen, The Washington D.C.'s.
Issued in December 1966 "Thirty-Second Floor" was the first single to be released in America by the British quintet The Washington D.C.'s (and their last).  It was previously issued in the U.K. in July on the CBS label (202226) where it was their third single on their third label (previous releases were on Ember and the primarily ska/mento/Calypso label Black Swan) and was titled "32nd Floor".
"Thirty Second Floor" is a poppy number with some cool classical piano/combo organ licks not unlike something by Simon Dupree and The Big Sound musically and heavy on the harmonies reminiscent of The Bystanders meet The Ivy League. It's catchy, well structured and well produced (by Barry Mason) and totally infectious!
The flip, "A Whole Lot More" is musically like something The Zombies were doing at the same time and it has some interesting soul chops to it but it's not something I would play repeatedly like the A-side. 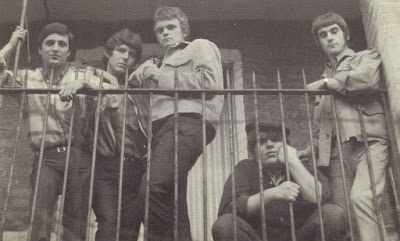 Songs That Rubble Taught Us: (The) Jackpots

My first introduction to Sweden's Jackpots was via Bam Caruso's 1991 "Rubble" compilation LP "5000 Seconds Over Toyland" (Rubble 15) that contained their 1969 tune "Jack In The Box". It was quite some time before I learned anything about them, in fact I think for a great portion of time I assumed that they were British!
The Jackpots were a five piece harmony act from Sweden with a career stretching all the way back to 1964. Their 45 releases were pretty much always covers ranging from the well known, ie The Four Seasons ("Walk Like A Man"), The Ivy League ("Tossing And Turning") to the obscure: Nirvana ("Tiny Goddess") and The Tokens/Episode Six ("I Hear Trumpets Blow"). Today's subject was their only American release. It was the 15th single on Seymour Stein's up and coming Sire label. Curiously enough it was only found a various artists 7" E.P. in their home country (Juke Box JSEP-5591 September 1969) while simultaneously issued here and in the U.K. (as Sonnet SON 2006).
"Jack In The Box", a group original, had previously appeared on their 1968 debut LP
of the same name (Sweden Sonet SLP-68) alongside cover versions of tracks by The Action (check out their tasty reading of "Shadows And Reflections"), The Beach Boys and Simon & Garfunkel etc.  The first time I heard it I honestly thought it was an Idle Race side project as the high pitch of the lead vocals and the production truly sound like Jeff Lynne and Co.! In retrospect there is also something rather Bee Gee's like in those falsettos as well. Musically it's a jaunty little pop sike ditto with some peculiar little backwards bits that come out of nowhere and again Idle Race comparisions cannot be overlooked.
Things get even freakier on the flip with the strangely named "Henbanes Sacrifice". It has a dirge like quality with some quintessential musical backing that reminds me some of the songs on the Tages LP "Studio" and strange varying effects on the vocals  that seem to change in pitch as the sing goes on! 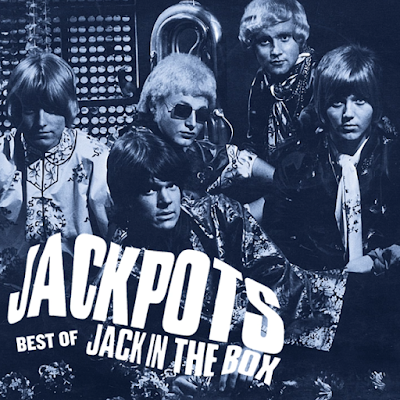