The Roots of Madness:Kilburn And The High Roads


As I grew wiser (and older) I began seeking out obscure British things from the early 70's that weren't glam.  Way back in the early 90's I'd heard Dr. Feelgood's "Down By The Jetty" and immediately had The Jam's debut LP "In The City" sussed. About  6 or 7 years ago I heard Kilburn and The High Roads....yes


Kilburn And The High Roads

and I had Madness sussed. Wow, I knew The Nutty Boys had some different influences, but this was completely their sound and the song that hipped me to this was "Rough Kids" that appeared on a "Mojo" CD that I think, was called "The Roots Of Punk" (I could be wrong).  "Rough Kids" was the band's debut 45 issued in the U.K. in November 1974.  For those who don't know the band were formed in the late 60's by Ian Dury and numbered among their line up a guitarist Keith Lucas (now known as Nick Cash, the lead singer of 999) and pianist Russel Hardy (who co-wrote much of their material with Dury). They are best remembered also as being one of the more eccentric, but short lived acts in the mid 70's U.K. pub rock scene.

"Rough Kids" has a slight ska feel to it from the mock West Indian accented lead vocals (not unlike The Kink's "Apeman") to the sax (which is also crossed with Dury's beloved 50's rock n' roll).  There's also a music hall feel on the piano and a slight almost "contemporary" bit with the female backing vocals sounding like most records from 1974's top ten.  Overall it's totally unique and bears absolutely no distinct resemblance to any one genre as Dury and Co. skillfully mish mashed a variety of influences, as he did throught much of his career.

"Billy Bentley" follows Dury's beloved Cockney/music hall influence (again an area absorbed by Madness lock stock and barrell) and later quite apparent on Dury tracks with The Blockheads like "My Old Man", "There Ain't Been Half Some Clever Bastards", " Billericay Dickie" or "Plaistow Patricia". Complete with Dury's cheeky banter, tasty sax lines and moments where the track slows down and disloves into a jaunty little piano trill (again QUITE Madness-like). 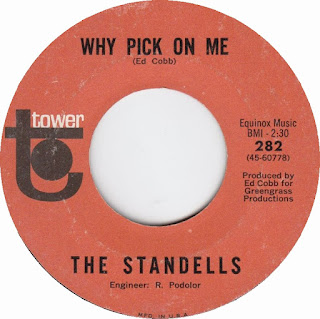 1. THE STANDELLS-"Why Pick On Me"
Released when I was a mere two weeks old this track is one of my fave Standells tunes (second only to the trippy "All Fall Down"), maybe it's Dick Dodd's scowling vocals or the "Mother's Little Helper" style guitar but it gets me every time.

2. THE LIBERTINES-"What Became Of The Likely Lads"
Never been a huge Libertine's fan, but they're growing on me bit by bit and this one's been playing in my car non-stop for weeks.

3. DON FARDON-"Belfast Boy"
"Just play the way the ball bounces and bounce the way the ball plays cos you won't have long in the limelight..."
Ex- Sorrows front man Don Fardon's near anthemic 1970 tribute to footballer George Best might sound dated to some with it's funky phlanged keyboards but it's not to me, another ear worm that I still haven't tired of.  Unbelievably I had a U.S. LP of his with this, and , I believe, "I'm Alive" on it that I sold in the late 90's!  Ack!

4. MANFRED MANN-"So Long Dad"
Randy Newman's tunes never grab me unless they're being done by someone else and this '67 Manfred's go at his "So Long Dad" is brilliant thanks to Mike D'abo's cheeky chappy vocals and Manfred's keyboard squawks.

5. THE KINKS-"This Is Where I Belong" (Stereo Mix)
One of the jewels of the "deluxe" edition Kinks CD's is this bonus track on their "Face To Face" set .  You can really hear Ray's voice and believe every word he's singing and you can also hear how well brother Dave's voice paired with his on the double tracking!

6. THE ALLUSIONS-"Roller Coaster Man"
A groovy piece of 60's Antipodean delight from their rare as hell 1966 LP.  Starting off with a great "Tired Of Waiting For You" groove it has a jangly "Beatles For Sale" meets "Kinda Kinks" feel to it.

7. NILSSON-"Jump Into The Fire"
Perfectly used in the Martin Scorsese classic "Goodfellas" in the scene where a coked out of his mind Ray Liotta is convinced a helicopter is following him (and quite possibly recorded by coked out of their mind people!) this number sets a groove.  It's lead vocals and bass anticipate Joe Jackson's "Beat Crazy" LP (listen to "Mad At You" and see) while the guitar chords seem to sound alot like Mick Jone's licks on "Give 'em Enough Rope".

8. CHICO HAMILTON-"Evil Eye"
I bought this 45 on whim a good many years ago for a buck at a record show and was blown away by it's trance inducing jazz/raga guitar work courtesy of Gabor Szabo.  Fast forward to 14-15 years later and I finally got around to figuring out what LP it was on and purchased it from iTunes, 1966's "The Further Adventures Of El Chico".

9. THE HOLLIES-"Too Many People" (Live B.B.C.)
One of my fave Hollies originals delivered in crisp three part harmony live on Auntie Beeb from the new live Hollies B.B.C. CD "Radio Fun" (review to be forthcoming).

10. THE SMALL FACES-"(Tell Me) Have You Ever Seen Me?" (alternate stereo mix)
As with The Kinks I'm finding myself once again being a record company rube and buying a deluxe edition of an LP I already bought a deluxe edition of three or four years ago.  But seeing as The S.F's 2nd LP is, alongside David Bowie's Deram debut, one of the fave albums of all time I plunked down the cash and bought it for the dozen or so unreleased alternate takes, like this one where you can really hear Mac's Mellotron and slight bits of the organ trills he's playing, though not nearly enough!  It also turns out that I read in "Mojo" yesterday that these new S.F's CD's are the first time tracks have been actually taken from the original masters.

and because I went to public school (that's literally an institution open to the public for my British readers)and can't count....

11. MADNESS-"My Old Man"
Stumbled upon the Nutty Boys version of the Ian Dury classic from "New Boots And Panties" on iTunes and I'll have to say they did it nicely with a little ska flavor.  Well done!
By Wilthomer - June 25, 2012 1 comment:

The Genuis of Graham Gouldman: on 45


Manchester's very own Graham Gouldman is best known for the string of hits he provided to The Hollies, The Yardbirds and Herman's Hermits to name but a few. With his own band, The Mockingbirds, such chart success eluded him despite his knack for songwriting and possessing great voice (he fronted The Mockingbirds).  Between early 1965 and late 1966 the band cut five amazing, but commercially unsuccessful singles in the U.K. (two on Columbia, one on Immediate and the final two on Decca).  Shortly before the last Mockingbirds single ("How To Find A Lover" Decca F12510 October 1966) Gouldman released the soulful ""Stop! Stop! Stop! (Or Honey I'll Be Gone)" as his first solo single on Decca (F 12334) in the U.K.  It too failed.  Undeterred he plugged on and released another U.K. only solo single ("Upstairs Downstairs" backed with a funky Hammond/Mellotron instrumental called "Chestnut" as RCA 1667 in February 1968) and oddly a bit later in 1968 he was rewarded with a U.S only LP called "The Graham Gouldman Thing" (RCA Victor LSP 3954).  It was comprised of 11 tracks, all Gouldman originals, many of which were previously recorded by other artists.  The original sleeve production credits go to Peter Noone, of Herman's Hermits, though Gouldman was adamant in an interview quoted on the Edsel CD reissue that Noone had little involvement after an initial visit and the bulk of the LP's work was done by the brilliant touch of John Paul Jones with help from Eddie Kramer and session drummer extraordinaire Clem Cattini with Gouldman providing guitar. 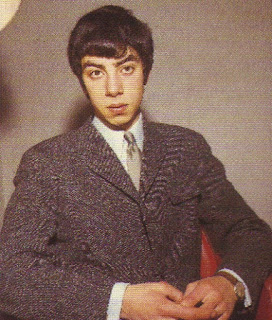 "The Impossible Years" was the first of two singles launched in the U.S. to promote the album. It was previously released as the fourth solo 45 by fellow Mancunian Wayne Fontana in November of 1966 (Fontana TF 770 U.K.). Gouldman's ode to the difficult times of a blooming teenage girl are perfectly rounded out by immaculate orchestration (strings and woodwinds) courtesy of John Paul Jones and strong lead vocals by Graham. It easily blows the Wayne Fontana version away on all counts. "No Milk Today" previously a smash hit for Herman's Hermits (# 7 in the U.K. and #35 as a U.S. B-side) doesn't fare as well as the A-side for my ears, it almost sounds as though Gouldman is going through the motions.  Regardless it's a great track, just not as amazing as it's topside. 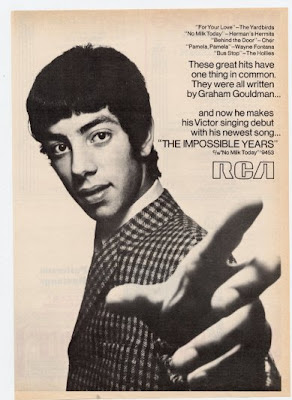 Both sides are available on the CD reissue of "The Graham Gouldman Thing".  And for a well done piece on his brilliant 60's career pop over here for a look: 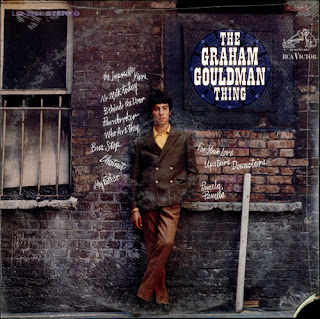 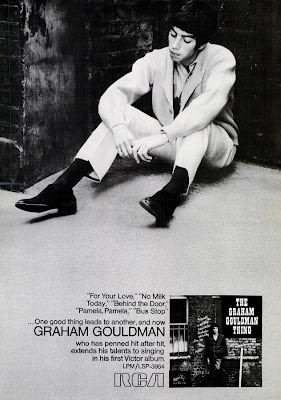 Weirdness:Sean Bonniwell and The Manson Family

I've long been fascinated by The Manson Family, not in a cult hero sort of way but there's something so unbelievably creepy about them that I find myself drawn to reading or watching anything I can get my hands on about them.

Back in the early 90's I lived near an amazing video rental store that stocked the most off the wall shit on VHS.  Among the treasure trove there was a 1971 film called "The Helter Skelter Murders".  In retrospect it's a pretty awful film, bad acting, at times the film is in color then reverts back to b&w, bad directing, the guy playing Manson looks like Felix Cavaliere from The Rascals, oh I could go on and on. BUT it has it's merits, the rest of the cast actually look like the Family members they're portraying and even better, the musical director was one Thomas Sean Bonniwell (aka Sean Bonniwell) of the Music Machine.  The theme tune during the opening credits is a super eerie instrumental version of "Dark White" (the tune itself with vocals appears frequently in the film) which is played while there's grainy negative footage of a moth being devoured in a spider's web.  Uber creepy!  You can watch it below, you'll have to wait till about the 5:00 mark before the credits/music begins. They also use "Eagle Never Hunts The Fly" in a "freak out scene at Golden Gate Park" as a bunch of long hairs looking like The Electric Flag or Country Joe pretend to play while a witness recounts on the stand how she met Charlie as well as "Soul Love" and a T.S. Bonniwell tune from his '69 LP "Close" called  "Where Am I To Go".  I've always been curious how he wound up involved with this flick!

Even more creepy is they even got the real Charlie Manson's music in the film with one track (the wiggy "Mechanical Man")!  Beyond the cast looking like members of the Family the people playing their victims look like the actual persons they are playing in many instances as well.  The layout of the house/yard for the Sharon Tate slaying scene looks as if it had been filmed on the actual location at 10050 Cielo Drive in Benedict Canyon (it wasn't). The scene is quite distrubing, more so than the 1976 TV movie "Helter Skelter" (featuring Beatles music by a band called "Rain"!) because it's graphic without resorting to slasher style gore and occurs pretty much the way we've all read it going down.

For more on the film you can get the specifics from imdb.com: