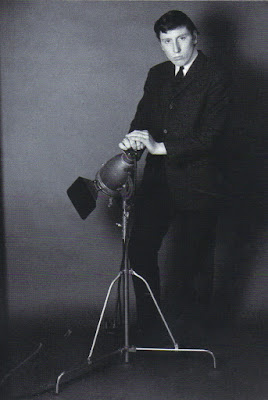 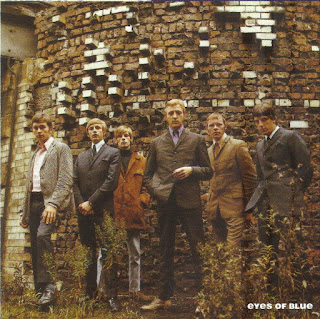 The Small Faces are one of my favorite bands of all time. Unknown to many there was a host of cover versions of their material through out the 1960's, in fact many of them came from Australia and even the United States. Here's ten of them for your enjoyment: 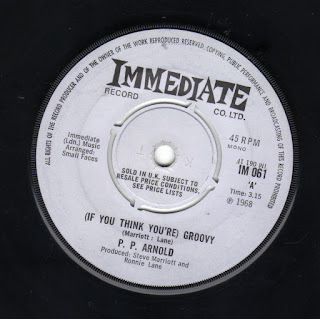 1. P.P. ARNOLD-"(If You Think You're) Groovy" UK Immediate IM 061 1968
"(If You Think You're) Groovy" is without a doubt the most famous SF's track that they never recorded on their own. Long rumored to lie awaiting a release in the vaults, a SF's recording of the track has yet to surface. No bother as the backing track is the band complete with Ronnie Lane's distinct Harmony bass lines, Ian McLagan's electric piano, Kenny Jone's signature drum rolls and Steve Marriott's soulful backing vocals. "Groovy" is a classic track thanks to the production (care of Messr's Marriott and Lane), the brass (trumpeter Eddie Thornton and a few other former band mates from Georgie Fame's Blue Flames) and of course P.P. Arnold's vocals wailing in the ultimate put down song.

2. INKASE-"Have You Ever Seen Me" Australia Sweet Peach SP-017 1970
Covered by The Stillroven in Minnesota (August 102, 1968) and Apostolic Intervention in the UK (Immediate IM 043, 1967) this spirited  Antipodean version was unearthed for the excellent "Downunder Nuggets" compilation a few years back and dates from 1970 where it was issued as a B-side to a 45 by Inkase. The misheard lyrics are a gas ("I've seen the lace..." , "I take a flowers, I take 'em to the laundry") but the delivery is excellent and far more powerful than any other versions out there to my ears. 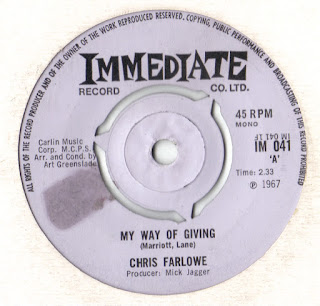 3. CHRIS FARLOWE-"My Way Of Giving" UK Immediate IM 041 1967
Chris Farlowe beat the SF's release of this track by a few months (it would later emerge as an LP track on their untitled Immediate long player). Like his hit on the label "Out Of Time" , it was produced by Mick Jagger and orchestrated by Art Greenslade. It's interesting but suffers, in my estimation, of having too much going on in it. In a BBC radio interview at the time of it's release Farlowe stated that the Faces played on it (P.P. Arnold is also discernible in the backing vocals)..

4. THE LA DE DA's-"Hey Girl"  New Zealand Phillips PF-338090 1966
Found on the flip of a blistering cover of John Mayall's "On Top Of The World" this pretty pedestrian version by New Zealand's La De Da's offers nothing new or interesting bar the cheesy combo organ in the background that's more prevalent in the mix than any keyboards on the original.

5. THE VALENTINES-"I Can't Dance With You" Australia Clarion MCK-1773 1967
Best known as Bon Scott of AC/DC fame's first group The Valentines cut a host of covers and their debut 45 paired this with a version of Arthur Alexander's "Every Day I Have To Cry". It's spunky and reminds me of a US garage band by eschewing any attempts at copying Marriott's soulful belting on the original while retaining the SF's go-go organ.

6. TYMEPIECE-"Become Like You" Australia 45 Festival FK-3369 1969
Sydney, Australia's curiously named/spelled Tymepice (featuring members of The Black Diamonds) get kudos for not only tackling an LP track (from the band's 2nd LP) but they rocked it out a bit by adding some "la la la's" and a bit more balls to the delivery. Sadly I couldn't find a link on YouTube to back up my description.


7. THE CHRIS SHAKESPEARE GLOBE SHOW-"Tin Soldier" UK Page One POF 113 1968
On the flip of yet another dreadful cover of the Fab's "Ob-La-Di, Ob-La-Da" is this pumped up interesting reading of "Tin Soldier". The brass really reminds me of Amen Corner and it's worth checking out on that alone. Vocally it reminds a bit of Eric Burdon but it all works somehow. Curiously it was released in 8 countries!

8. THE INCAS-"One Night Stand" UK Parlophone R 5551 1966
High marks for Britain's Inca's who not only chose an obscure track from the SF's untitled debut Decca LP but backed it up with a carbon copy of the Action's reading of "I'll Keep Holding On"! This interpretation of "One Night Stand" is nothing earth shattering but they get credit for their decent choice of SF's tracks to cover even if it differs very little from the original.

9. JOHNNY HALLYDAY-"Amen" LP track France "Riviere Ouvre Ton Lit" Phillips 844 971 BY 1969
Towards the end of 1968 the SF's with Peter Frampton in tow headed over to France to earn a few pounds backing Gallic icon Johnny Hallyday on an LP he was recording where they backed him on three Marriott/Lane compositions (the others being "News Report" and "What You Will", the latter of which later cropped up on the debut Humble Pie long player). The third track, "Amen" is an adaption of the '66 Decca outtake "That Man" that loses all the hazy psychedelia of the original and becomes a heavy rock dirge not unlike what Humble Pie would eventually veer towards, with French lyrics of course. It works, but just barely mainly because Hallyday is clearly out of his vocal range on this one.


10. THE CLEVEDONAIRES-"Up The Wooden Hills To Bedfordshire" New Zealand Impact IR-1036 1968
New Zealand's Clevedonaires backed a 45 of their version of Donovan's "Sunny Goodge Street" with this Ian McLagan penned track from the band's untitled 2nd LP. It doesn't stray far from the original version but the churchy organ and tight West Coast style harmonies make it one of my favorite SF's covers.


Such was the power of all things from England in the USA that in October 1965 Press records issued the debut 45 by a new and unknown London quartet called the Small Faces. The band made their UK debut in August 1965 on Decca F 12208 (which eventually rose to # 14 there) just a few short months after forming with Steve Marriott (lead vocals, guitar), Ronnie Lane (bass), JImmy Winston (keyboards) and Kenny Jones (drums).

Debut 45's don't come much stronger than "Whatcha Gonna Do About It". Loosely based on Solomon Burke's "Everybody Needs Somebody To Love"  it was written by Ian Samwell (author of Cliff Richard's "Move It") and Brian Potter (later to write "Don't Pull Your Love", "One Tin Soldier" and many other hits). Propelled by Winston's Vox Continental organ and Steve Marriott's blisteringly raw vocals it has an air of aggression that reminds at times of an American garage punk record.

The flip side is a cover of Timi Yuro's June 1962 hit "What's A Matter Baby" (Liberty 55469). If not for Marriott's incredible vocal's it would be just another mid tempo r&b cover, but nonetheless it's worth a listen. Interestingly outside of this and a version of The Miracle's "You Really Got A Hold On Me" the band pretty much veered away from soulful ballads.

Both sides have been issued in a variety of places, the best being a deluxe edition of their untitled debut Decca LP.

Hear "Whatcha Gonna Do About It":

Hear a Live BBC version of "Whatcha Gonna Do About It":