1. DAVID BOWIE-"Life On Mars"
Since checking out the "David Bowie Is" exhibit at the Brooklyn Museum (I'll get around to writing about that soon) I have been going through a rather heavy (heavier than normal) Bowie bender and this one seems to pop into my head daily!

2. NEW YORK PUBLIC LIBRARY-"Love Me Two Times"
This interesting cover of the Doors track comes via the even more interestingly named British band called The New York Public Library. It doesn't deviate much from the original but it's cheezy combo organ and 12 string guitar give it an almost US 60's garage band feel and easily betters the original in my book!

3. THE REGENTS-"Words"
L.A's Regents (not to be confused with the "Barbara Ann" hit makers) beat The Monkees by almost a year with this rough n' ready version of this Tommy Boyce and Bobby Hart track issued in the States in July 1966 on the short lived Penthouse label. It's inclusion on a Psychic Circle CD years back led me to believe it was British for quite awhile!

4. STILL LIFE-"What Did We Miss"
Still Life were on one of the Bam Caruso "Rubble" volumes ("Rubble 18: Rainbow Thyme Wynders", clearly they were running out of title ideas towards the end there) with the regal sounding "My Kingdom Cannot Lose". It was the flip of this interesting number that starts with military drum rolls and questions the glory heaped upon past military conflicts whilst...."what did we miss people think was so glorious millions of lives that the people gave...." with a great O.T.T. pop-sike delievery.

5. OTIS SPANN-"Keep Your Hand Out Of My Pocket"
Recorded in the UK under the supervision of blues aficionado Mike Vernon this tune from '64 was a re-recording far superior to any other versions Spann cut in my book. It's found on the flip of his Decca 45 "Stirs Me Up" and got it's airing to my ears back in the 80's on Kent's "Rhythm & Blue Eyed Soul" LP compilation.

6. JIMMY POWELL-"Tom Hark"
There's loads of versions of this famous Elias and his Zig-Zag Jive Flutes instrumental.  This reading by UK 60's r&b underdog Jimmy Powell was possibly the first white British cover of it. It retains some of the melody of the original but adds vocals with a sort of Chubby Checker meets Gary U.S. Bonds feel which believe it or not works really well.

7. JEAN WELLS-"After Loving You"
This one's a brilliant soul number on record industry heavy Frank Calla's label Calla found on the flip of Jean Wells  '68 ballad "Ease Away A Little Bit At A Time". The vibes and production pretty much guarantee that it was a Northern soul favorite. 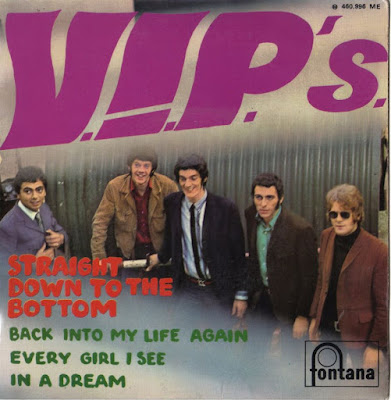 8. THE V.I.P.'s-"In A Dream"
Powerfully led by the blue eyed soul beltings of recently deceased lead singer Mike Harrison this Jackie Edwards composition featured on the flip of their in demand mod/soul stormer "Straight Down To The Bottom" and showcases the vocals of the man Gary Wright called "the white Ray Charles".

9. KIP ANDERSON-"A Knife And A Fork"
This brilliant 1966 45 on Chess blends Chicago blues with some up tempo soulful r&b for a perfect marriage. The sax reminds me of Junior Walker while the groove reminds me of a Rufus Thomas Stax 45.

10. THE RON-DELS-"Lose Your Money"
Here's a tough/punky U.S. cover of The Moody Blues number issued here in late '65 on the Smash label with an even more powerful harp blowing than the original, tougher guitar and totally snotty/snide requisite Jagger mincing vocals.  Killer!


David Bowie's third US 45 would be his last on the Deram label (it was also his last Deram 45 in the UK when it was issued in July 1967 as DM 135). It's American release was delayed until September and contrary to the label indicating it was "from the LP "David Bowie" it was not the version found on his debut LP but a re-recording that had been made on June 3rd with string arrangements by Ivor Ramonde (just two days after the release of David's debut LP). The single version is slightly less upbeat than the original album recording, with heavier orchestration with woodwinds and Bowie's vocals taking on a slightly more accentuated British accent. It is also of note that the track ends with the strings playing "Hearts And Flowers" after Bowie ruefully opines "well, I might be able to stretch it till Wednesday". This version was also used as the theme to the aborted 1969 David Bowie TV special "Love You Till Tuesday" (which was finally released in 1986).

"Did You Ever Have a Dream" is a number that I honestly have only recently grown to love. Interestingly driven by banjo (care of session-man extraordinaire Big Jim Sullivan) and tack piano it's probably one of the first pop songs to address astral projection and quite possibly also the first pop song to mention the boro of Penge ("you can walk around in New York while you sleep in Penge")!  It's happy-go-lucky feel is aided in no small part by some brilliantly regal brass parts. Bowie's vocals sound different than anything else from his Deram period, I can't quite put my finger on why though.  It ends with the sound of some breaking crockery.


Both tracks are available in a variety of places but we recommend the deluxe two CD 2010 reissue of David's debut album.

Hear "Did You Ever Have A Dream": 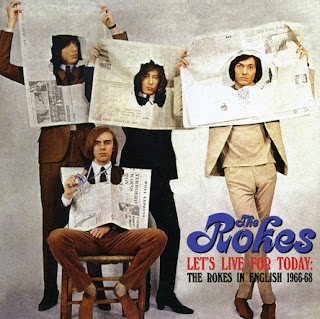 It's been awhile since we chose a "mod anthem" here (we discussed "My Generation" and "The London Boys" here eons ago). Today's subject was cut by Brit r&b stalwarts Chris Farlow and the Thunderbirds (the "e" was dropped from Farlowe's name on all five of his UK Columbia 45's ) and released in Britain in June 1965 and remains one of the most controversial mid 60's British 45's.

"Buzz With The Fuzz" looms large in the legend of mid 60's British mod/r&b sounds, mostly due to it's lyrics which sing about running red lights, rolling up joints, sex with an underage girl and shooting craps. It is alleged that the 45 was banned by the BBC, but I have yet to find much information on it other than that being repeated endlessly in liner notes.  Interestingly the track was not reissued until the late 80's on a Decal records Chris Farlowe LP that took it's title from the track and it was their last release on Columbia so it's possible it DID land them in hot water.  All of that out of the way musically its an amazing slice of Brit 60's mod "Flamingo" r&b: horns, organ (which replicates a police siren) , jazzy guitar breaks (care of ace guitarist Albert Lee) with a catchy delivery not unlike Gunnell Agency mates Georgie Fame and The Blue Flames.


The flip "You're The One" is another slice of frantic Brit r&b.  It's fairly pedestrian until Lee's brilliant guitar solo kicks in followed by a nifty organ solo by Dave Greenslade. Sadly this would be the last single to bear "The Thunderbirds" credit on the label.  With Farlowe's move to Andrew Loog Oldham's Immediate label a few months later his records were recorded featuring studio musicians, though The Thunderbirds continued to back him on live work. Both sides were written by Farlowe (using his real last name Deighton), Albert Lee and Thunderbirds bassist Ricky Charman.

Both sides are available on RPM's highly recommended "Dig The Buzz: Chris Farlowe & The Thunderbirds: First Recordings '62-'65" and "Buzz With The Fuzz" has surfaced on the excellent Brit 60's r&b CD comp "Take My Tip: 25 British Mod Artefacts From The EMI Vaults".

Hear "Buzz With The Fuzz":

The Tornados were by the time of this 45's release in March of 1966, related to the "Telstar" hit makers in name only. Essentially this Tornados line up were previously The Saxons, another Joe Meek produced instrumental combo who with the addition of Dave Watts (keyboards) fleshed out a "new" Tornados line up.  The other members were Robb Huxley (also known as Robb Gayle, vocals/guitar), Pete Holder (guitar), Roger Holder (bass) and John Davies (drums). Though credited as "The New Tornados" on promo photos the name was never used on records or for appearances.

"Pop-Art Goes Mozart" is your typical tedious, boring, Meek instrumental sounding like 1963 NOT 1966 despite the baroque harpsichord. Don't let the title fool you, there is nothing remotely "pop art" about this 45. Next.

The real treat is the flip side, "Too Much In Love To Hear" penned by members Pete Holder and Robb Huxley (credited here as "Gale", a misspelling of his "other" last name Gayle) . It's a rarity among Tornados 45's as it's a vocal number.  Led by some tack piano with the typical Meek production flourishes it's a moody piece , sort of a beat ballad with a nice jazzy/Shadows style guitar solo and a welcome pleasure to hear vocals on a Tornados record!! Interestingly Huxley later moved to Israel where he joined The Churchills who cut a trippy (and far improved in my book) version of the track which was comped on one of the "Strange Things Are Happening" CD comps.  For a more detailed history of the "New Tornados" check out Robb Huxley's extensive and highly informative web page here. The band would cut just one more 45 with Joe Meek, but that, as they say, is another story for another time. You can read that story here.

Both sides are available on a highly recommended double CD compilation "Telstar: The Complete Tornados".

Hear "Too Much In Love To Hear":