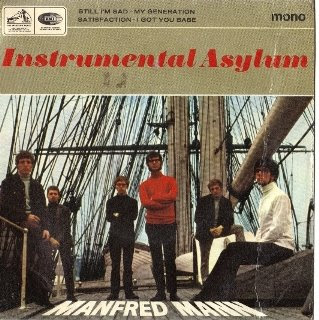 
Being no strangers to jazz Manfred Mann threw the pop world on it's ear(s) in 1966 when they released "Instrumental Asylum", an E.P. chock full of jazz versions of currents "pop" hits of the day. By now the band were on the verge of losing lead singer Paul Jones. The multi-instrumental guitarist Mike Vickers had already jumped ship. Bassist Tom McGuinness had shifted into his place with his bass vacancy being briefly filled by Jack Bruce who'd recently left the Graham Bond Organization. With Manfred on keyboards and Mike Hugg on drums the band were complimented by a two man horn section comprised of Henry Lowther (trumpet/flute, later to join Georgie Fame in 1967) and Lyn Dobson (saxophone).


Upon it's release the E.P. was both praised and savaged by the U.K. music press, this mattered little as it went on to become the band's least successful (sales wise) E.P. on HMV, and also their last for the label. Ex-Band of Angel's lead singer Mike D'Abo joined to replace Paul Jones and the band switched labels to Fontana.


The arrangements on the E.P. vary. The E.P. kicks off with The Yardbird's "Still I'm Sad" which swings (rather heavily I might add) thanks to some great solos by Lowther and Dobson who pretty much carry the tune and some heavy ivory pounding by Manfred. "My Generation" is barely recognizable from The Who's amphetamine mod stutter "anthem" until the vibes play the melody of the chorus (I'm curious who it was as the band's previous "vibes man" Mike Vickers was gone) before it returns back to Bruce's speedy bass runs backed by some fine horn work. Sonny & Cher's pedestrian "I Got you Babe" is turned into a cheeky, sped up elevator jazz project with Lowther and Dobson again receiving the accolades making it, in the words of a great jazz Lp "a swinging affair". The group's swipe at The Rolling Stones "(I Can't Get No) Satisfaction" is a wonderful number. It's a mish mash of the powerful horn section (with a wonderful solo by Dobson as he trades licks with Manfred's B-3 and also a nice solo by Lowther), football terrace like "chants" by the band of "hey hey hey that's what I say" during the breaks and some over the top fuzz guitar by McGuinness right afterwards! Brilliant. The band returned the to " jazz versions of pop hits gimmick" (though less exciting) later in the year on Fontana with another jazz themed E.P. titled "Instrumental Assassination" (TE17483).


All four selections from the "Instrumental Asylum" E.P. can be found on the LP "The Soul Of Mann" which has been reissued on CD by EMI bearing both mono and stereo versions of all of the cuts on one disc. 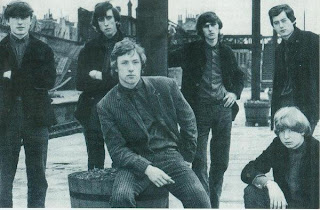 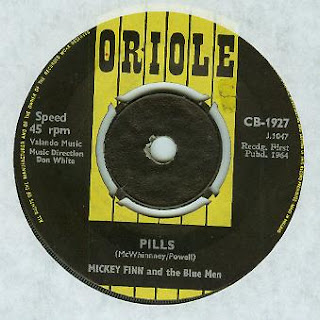 
As covered in my earlier blog entries, there were a few ska influenced British r&b bands . Mickey Finn & The Blue Men had already managed a 45 on the Jamaican specialty label Blue Beat (see entry 12/15/08) in 1964. Shortly afterwards they managed another ska coup on the U.K. label Oriole.


If I were to tell you that a British 60's r&b band did ska tunes you wouldn't bat an eye, but have you ever heard anybody do ska versions of Bo Diddley numbers? I doubt it. Whereas their lone Blue Beat 45 ("Tom Hark" b/w "Please Love Me") attempted to sound more "authentic" with a slightly close approximation of what a bona fide Jamaican ska record would sound like their offering here on Oriole is a bit different. For starters "Hush" has saxophone along with the more stereotypical British r&b tools like maracas, harmonica, bass, guitar and drums. While it's not The Pretty Things or the Downliners Sect it ain't Georgie Fame & the Blue Flames either. Both numbers rely on the same pace, the rocking ska shuffle stereotypically used by most cheezy cash in's (like The Migil Five's dreadful U.K. hit of "Mockingbird Hill"), so much to the point that they've ceased to be Bo Diddley songs anymore and become more like Byron Lee and The Dragonaire's "holiday camp ska". "Pills" is the better of the two in my estimation because, well it's the better of the two Bo Diddley tunes.


Both sides of the Blue Beat 45 have been legally reissued to the collection of their work "Garden Of My Mind: The Complete Recordings 1964-1967".

The End of The Moody Blues Mark One 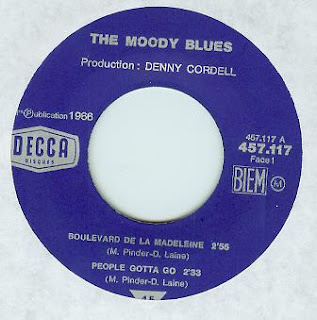 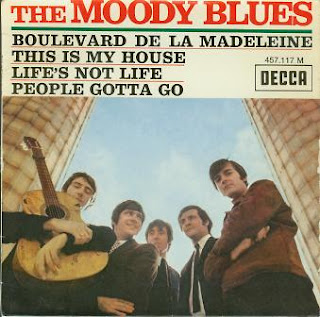 By August 1966 The Moodies hit parade days were long gone. Bassist Clint Warwick departed and was (briefly) replaced by Rod Clark. This short lived line up can be glimpsed on German TV’s “Beat Club” where the band play and “I Really Haven’t Got The Time” (later to crop up as the B-side to Decca F12607, May ’67, their first 45 w/ Justin Hayward and John Lodge..more on that one next time I promise). The band’s final U.K. 45 with Denny Laine at the helm was “Boulevard De La Madeleine/This Is My House” (Decca F 12498) in October 1966, unlike their previous releases this single failed to achieve any sort of chart placing and Denny Laine left. Never one to miss a cheap quid Decca released two Laine era cuts “Life’s Not Life/He Can Win” (Decca F12543) in January of 1967, only to withdraw it. The world would have to wait a further four months for the debut of The Moody Blues Mark Two.

Across the channel in France before the close of 1966 Decca issued an interesting E.P. comprising of Decca F 12498 and two previously unheard numbers (at this time): “Life’s Not Life” and “People Gotta Go” (which had been cut as “Send The People Away” by The Loose Ends on Decca F12437, more on that one sometime!). “Boulevard De La Madeleine” is an interesting cut. It fits the somber ’66 Moodies mold (which by this point in their career abandoned r&b/soul covers and influences). It’s also interesting that it, like all the tracks on this E.P. was written by Laine and keyboardist Mike Pinder. It’s not a bad song, it’s well..just not that great either. One could easily see the Walker Brothers covering it as a throw-away LP track. “This Is My House” is far more appealing. It’s upbeat, with some gritty licks played by Laine (perhaps on his Rickenbacker 330) and the typical Moodies high backing vocals from Pinder and harmonica player/flutist Ray Thomas with some great chord changes. “Life’s Not Life” is another “throw-away” tune which makes its debut here, previously unavailable anywhere (though it was withdrawn in the UK as mentioned it was released in several places “on the Continent”, notably Holland and Germany), next. The crown jewel of the E.P. for me is “People Gotta Go”. Maybe it’s because it was new to me after 20+ years of hearing every Denny Laine era Moodies cut. Either way it’s a boss track and this E.P. is the only place it turned up (to my knowledge). It’s heavy on the piano with some great breaks and stellar harmonies by Pinder and Thomas while Laine soulfully croons. Why this track never got a U.K. release while Decca were churning out less than stellar Moodies cuts I’ll never know! As a side note the Decca act The Loose Ends issued a version where it was titled "Send The People Away" which was released on U.K. Decca F 12437 in 1966 (backed with a version of "Ain't Gonna Eat Out My Heart Anymore", more on that one someday). 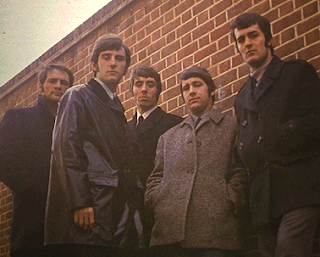 With the exception of the much gushed about “People Gotta Go” all the three cuts from this E.P. turned up on the U.K. CD reissue of their only Laine era LP “Magnificent Moodies” along with other assorted B-sides/EP cuts. “People Gotta Go” surfaced in the mid 90’s on a bootleg CD “Rare Beat Tracks Volume Two”. 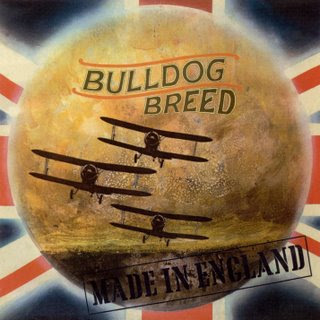 Bulldog Breed had previously left their mark with their 45 debut(subsequently their only 45!) 1969's "Portcullis Gate'/"Halo In My Hair" (Deram DM 270) before shifting to Deram's "new" label Nova which had been set up for more "progressive" (aka "prog") acts. I can't tell you much about the band but I do know their drummer Louis Farrell had previously been in a trio called Gun with the Gurvitz brothers Adrian and Paul who scored a UK Top 10 in 1968 with "Race With The Devil" (and it's over the top freakout mantra "Sunshine" on the underside).
The LP reached out to the Anglophile in me and I checked it out after my old guru Ron Rimisite had put it on a cassette tape for me in the early 90's. The sleeve features a painting (or treated photo) of a trio of World War Two era Gloster Gladiator biplane fighters(Great Britain's last biplane fighter) getting aloft emblazoned on a Union Jack. Despite their "heavy" nature the band obviously wear their British-ness on their sleeve, literally and figuratively. The songs contained within smack of "social observation" on distinctly British topics. "Paper Man" kicks off with chiming bells of Big Ben and a newspaper street vendor's calls and throttles into a wah wah led diatribe on newspapers ("see who robbed the house next door turn back to the football scores") while the band chug through like a "heavy" number by The Move. "Sheba's Broomstick Ride" is next and explores that witchiness that could only come from a nation responsible for Hammer satanic exploitation films and Aleister Crowley . It chugs along with a funky groove complete with loads of satanic/witchcraft imagery. Stepping away from quintessential English quirkiness is " I Flew", though the lyrics don't mention it specifically, one can imagine it's about Vietnam full of apocalyptic images with wah wah and some high Moody Blue's type backing vocals complete with bomb busts and staccato machine gun bursts "come General tell me why you're so far from the action". "Eileen's Haberdashery Store" brings us back to merry old England. It's more than reminiscent of Tomorrow's "Auntie Mary's Dress Shop" with the "little old lady who runs a shop" theme and like the Tomorrow number there's harpsichord and a regal feel, brilliant nonetheless. The Englishness continues with the tongue firmly in cheek "Folder Men" an anti-white collar rant a good 8 years before Paul Weller sneered "Mr. Clean". "Folder Men" is delivered at a Kink's/Small Faces-type pace complete with pub piano and kazoo (or is it paper and comb?) while the band bait an uptight office worker ("work at your jobs you bowler hatted briefcase clown don't you dare to argue as your world comes tumbling down"). "When The Sun Stands Still" has a Led Zepplin-esque feel, maybe it's the cheesy near orgasmic grunts and the chunky riff, not really for me. "Silver" starts out as a piece of Humble Pie-ish boogie with very neat backing vocals that remind me of Mighty Baby (we'll get to their LP shortly kids!) before meshing into a repetitive four chord groove. The instrumental "Top O' The Pops Cock ?!?!" reminds me of early Jethro Tull (ie "A Song For Jeffery") with the bluesly simplistic riff jam complete with harmonica, acoustic guitar etc. "Revenge" is poppy and seems to anticipate the so called "bootboy glam" genre of ballsy close cropped lads who made records that sounded like T. Rex meets The Sweet while retaining the edge "ripping up seats/having a ruck" of Slade. The LP ends with the phased vocal led "Austin Osmanspare" with flute, witchy/black magic lyrics, creepy backing vocals sounding like a Church of Satan version of The Moody Blues jamming with early Jethro Tull (yes them again).