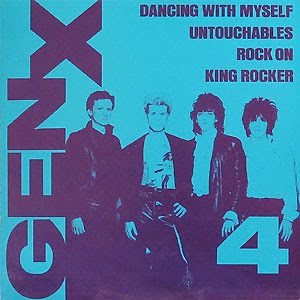 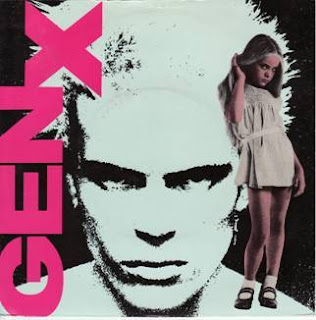 One Man's Musings On His Youthful Appreciation of Generation X

As a young mod growing up in suburban Monroe Township, N.J. circa 1980's my two best friends were punks. We all shared a lot of each other's musical tastes. My late friend Scott "Rudie" Rosinski's weekly predilection for religiously taping a late night (Wednesday's I think?) punk rock show on a predominantly heavy metal college station (WSOU perhaps?) led him to discovering a track that blew my mind when he played it to me the next day after school. Jokingly scoffing at my obsession with The Who's "My Generation" he said "Here's something better..." and proceeded to play me "Your Generation" by Generation X (sadly I'd never get the opportunity to turn him onto Sham 69's "Whose Generation") as we walked walked "downtown" to nearby Jamesburg. I can still remember blasting it on his tiny/tinny boom box, no doubt probably being chased by some heavies on the way (always a possibilty as Jamesburg was the armpit of the universe, rife with knuckle dragging headbanging low life's who loved to beat people up) . Feeling vibrantly rebellious we played it over and over again as we grabbed a slice of pizza and a Coke.... "the end must justify the means and your generation don't mean a thing to me". Powerful stuff to a bunch of 15 year old's who were pretty much ostracized for dressing "different" and in full "rebel without a brain" mode. We'd heard of them but knew nothing of them and set about buying stuff by them. We discovered they were now (then) called Gen X. Rudie bought their latest single "Dancing With Myself" with lead singer Billy Idol looking sinister while a "Lolita" like girl posed provocatively , I opted for the less risque Gen X EP.


When Gen X broke up Billy Idol became a solo "star" and"Dancing with Myself" was re-released as a solo single in both the U.K. and the U.S. It did little till MTV aided in the launching of his solo career with the much despised "Rebel Yell", which became a monster hit, enabling yet another crack at "Dancing With Myself"which after it's third try, became a hit. Never one to pass up on the mod credo of their "I did it first" ethos I took pleasure in revelling to my classmates that I was indeed there first (well not really, I mean Generation X had been making records since 1977) but like some guy from Woking sang once "don't forget you saw it here first".


The only good thing was that Billy's mega stardom got the re-release of the first Generation X LP in the States with all the cuts that did not grace the U.K. LP and in 1983 I wore the grooves off of it till I'd inadvertently left it on the roof of my car one morning before school (with my lunch, losing both forever). It was chock full of angst ridden anthems that struck me as being just as "mod" as most of the band's I was listening to like Secret Affair, The Chords or the Purple Hearts etc. "100 Punks", "Day By Day", "Your Generation", "Wild Youth", "Kiss Me Deadly" , "Promises, Promises"and "Gimme Some Truth". It wasn't until a VERY clued in classmate/co-worker (at McDonald's) named Mark Andrews informed me that "Gimme Some Truth" was in fact a slightly lyrically altered version of a John Lennon track. Mark was one of the rare breed of guys from Jamesburg who actually had long hair and a moustache who not only was NOT a knuckle dragger but was a friendly, open minded guy who liked a vast spectrum of music and was not remotely interested in kicking the shit out of anyone. That blew me away, and still does. The whole ethos of the punk rock "blank generation" was distaste for rock n' rollers who my pal Larry Grogan would refer to in the mid 80's as "wretched excess". And here they were covering a John Lennon track, granted Lennon didn't really fit with the wretched excess gang but he was firmly part of the old guard who in our young eyes "boring old farts". "Promises Promises" addressed this directly with lines like "we started out with guitars and hate, our heads in the clouds we could hardly wait....our hair was short, we said what we thought, never be scared, never be bought", "do you remember their promises, promises, I doooo.." and the classic line "never sell out like they did". Some non-punk rock friends loving embraced Billy Idol and went to see him play a college gig in 1983. I went along as well, it was cheap and there was nothing else to do and having seen the Vapors at the same university it was familiar ground (we had tickets to see The Professionals there too but a near fatal car crash cancelled the rest of the tour). It was awful. I watched and listened as he and his band bludgeoned a smattering of Generation X songs like "Ready Steady Go" and "Kiss Me Deadly" with heavy metal guitar pyrotechnics and his bad Elvis crooner voice when he wasn't shrieking like some L.A. metal act. In between songs I'd managed to squirm close to the stage . After bragging to my punk friends I was going to pogo and gob on him if he played any Generation x numbers, a threat I did not carry out, I did one better. In the silence in between numbers I yelled with all of the air that my angst ridden 16 year old lungs could propel "Billy, do you remember your promises promises?". His back was to the audience and his head spun round almost Linda Blair "Exorcist"-style in my direction trying to suss out who dared quote one of his songs that now was all too embarrassingly indicative of him now. I yelled again "Well? Do you?" and our eyes locked. He lifted an enraged middle finger at me and glared before again turning his back assuming a Christ-time arms out stance and the band plowed into some god awful tailor made for MTV watching twits number. I was in heaven. I'd called Billy Idol's bluff and pissed him off and got the finger and a "if looks could kill" grimace in return to acknowledge the depth of the wound my words had stirred. 27 years later I feel like sort of a twat. I mean the guy was trying to make a living, but you know what, his music was great, then he went to shit and sold his soul, so *uck him. It wasn't like I was the world's biggest Generation X fan, but unlike 3/4's of those '79 mod bands I can still play that first Generation x LP and enjoy almost every minute of it (except that heavy metal guitar solo on "Youth, Youth, Youth").
By Wilthomer - January 05, 2010

Sometimes you got to tell it like it is ya know? He was a sellout and to teenagers that's a big let-down and he knew/knows that.

Nice one. Generation X was a book on '60s youth with lots of quotes from young mods. That's where the name came from. And 100 Faces was a group of original mods that followed The Who. Great blog!