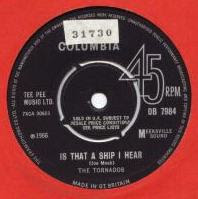 THE TORNADOS-Is That a Ship I Hear?/Do You Come Here Often U.K. Columbia DB 7984 1966
By August 1966, the release date for the final Joe Meek produced Tornados single, the world had well and truly passed by the once innovative producer. In 1966 Meek was still pretty much utilizing his same production techniques in his apartment studio located at 304 Holloway Road that he'd been using since his first hit in 1961 (John Leyton's "Johnny Remember Me"). The Tornados at this time were Tornados in name only as none of the original member's responsible for Meek's 1962 opus "Telstar" (a U.S. and U.K. #1) were left onboard. The Tornados from December '65 until Meek's death on February 2, 1967 were ex-members of another Meek instrumental act called The Saxons. The line up was as follows: John Davis (drums), Robbie Gale (rhythm guitar), Peter Holder (lead guitar), Roger Holder (bass) and Dave Watts (keyboards).

The A-side, an instrumental called "Is That A Ship I Hear?" starts out with sound effects of seagulls and crashing waves and the trademark Meek beat and echoey, warbly guitar licks and what sounds like sleigh bells! Nothing really new or interesting as it bears all the usual Meek trademarks, in fact if you played it to me on my first listen I could not tell it was 1966 and would suspect it was from '62 or '63. The flip "Do You Come Here Often" is a fairly loungey instrumental led by organ and freely restrained from any "weirdness" (that is musical weirdness like most of Joe Meek's other productions). The real "weirdness" comes at about 2:18 minutes in when two band members begin chatting in a very campy mannerism (Gentleman #1:"I see pajama style shirts are in". Gentleman # 2 "Well pajamas are OUT, as far as I'm concerned.."). A thorough listen reveals they are more than likely two gay gentlemen out cruising and comparing notes. The record is quite risqué for it's time considering that in August 1966 homosexuality was still illegal in Great Britain. Meek, a well known homosexual, was notoriously known for cruising London's seedy underworld who fell victim to numerous blackmailers, no doubt probably supplied the dialogue to the band members.

Both tracks can be found on the Repertoire 2 CD Tornados compilation "Telstar:The Complete Tornados" which compiles all of their Decca and Columbia material for the first time in one packaging.

The final line-up of The Tornados

Hear "Do You Come Here Often": 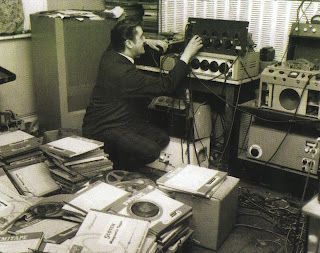 Standard photo of Meek in the studio at 504 Holloway Road.
Mike Stax in "Ugly Things" captioned it the best:
"Joe Meek adjusts the weirdness dial".
By Wilthomer - February 10, 2010