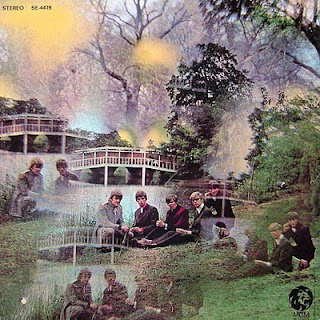 Herman’s Hermits in the U.S. in the mid 1960’s (or as they’re often incorrectly referred to on many a U.S. 60’s T.V. show as “Herman and the Hermits, snigger) were like the American cola brand R.C. Cola., always #3 but hoping for higher. Indeed behind The Beatles and The Rolling Stones the band ranked third in record sales in the United States as part of the “British Invasion”, something the folks at their American label, MGM, hoped would change. With lead singer Peter Noone successfully exploited/marketed as a teen idol in the States their target market was, unlike the top two, decidedly slim (the attention span of prepubescent girls was probably not a fair bet to hedge your company on). But MGM had great faith and forged on. This led to the reason where as late as the 1990’s there were still sealed copies of their LP’s to be had almost everywhere. MGM, lacking the insight or common sense actually believed their charges might one day over take The Fabs or The Stones and over pressed copies of their long players in gargantuan amounts. By the time of their sixth U.S. LP “Blaze” in October 1967 the sales market on the band had died down. Little did they or MGM know but the band had scored their last U.S. top ten hit (“There’s A Kind Of Hush” in February ‘67) and would not see the top ten again. The British Invasion was fast dying, even in the unhip and always light years behind American music industry, but no one bothered to tell MGM. “Sgt. Pepper” had all but slain everyone of the “beat group” era save The Hollies and though Herman’s Hermits still managed chart hits in the U.K., their day was pretty much done in the U.S.

“Blaze” (MGM E/SE-4478) was unleashed on the U.S. record buying public in October 1967 where it managed to reach the depressing #75 on the LP slots (it’s predecessor “There’s A Kind of Hush” clocked out at #17). It utilized two previously released U.S. singles, “Don’t Go Out Into The Rain” (May 1967, #17) and Donovan’s “Museum” (September 1967, #39), their B-sides and a slew of other new tracks. It was not released in the U.K. What’s most fascinating is it’s front sleeve. There’s a quadruple color photo image of the band squatting near a pastoral riverbank in their finest (ala Vic Singh’s shot of The Pink Floyd on “Piper At The Gates Of Dawn”) without a title or band name to be seen. Deceiving as the photo may be (the picture is about the only thing “psychedelic” about the album) it’s actually quite good.

The LP has some surprisingly striking numbers that are pretty good. “Museum” had previously popped up on Donovan’s U.S. Epic LP “Mellow Yellow” in March 1967 but H.H’s cut it as a single. With orchestration c/o one John Paul Jones it’s miles away from the serene Donovan version. It’s full of all of the archetype “Swinging London” era instrumentation: bold brassy horns, Latin percussion with congas, mild snatches of Hammond, multi layers of guitars etc. Hands down it’s probably one of my favorite tracks by the band. “Upstairs, Downstairs” comes from the pen of fellow Mancunian Graham Gouldman (the band were no strangers to his tracks having previously recorded his “For Your Love”, “Bus Stop” and “No Milk Today”). It’s a light piece of heavily orchestrated pop with strings, woodwinds and some harpsichord thrown into the mix focusing on your typical boy-meets-girl scenario only they're neighbors. “Moonshine Man” is by far one of the most “way out” things the band had ever attempted. From it’s hypnotic Macca-esque “Taxman” style bass line to this snatch of tweaked sitar sounding guitar (that bears a resemblance to the same effect used on The Stone’s “Mother’s Little Helper”) it’s totally uncharacteristic from their other material and was previously used to round off the B-side for “Museum”. “Green Street Green” is not The Kinks style jaunty number you would expect from it’s title but an upbeat sing-along type number (of equal vein is Side Two’s “One Little Packet Of Cigarettes”). “Last Bus Home” is as close as the band ever came to “social commentary” with Noone scowling about waiting for the bus at the end of an unsuccessful night on the pull in the clubs. Dreary, bleak but well executed and a perfect foil to the gaiety that was Petula Clark’s “I Know A Place”. “Ace, King, Queen, Jack” was the LP’s closer.  It's another number that defies what you’d expect from the hit machine that gave you “Mrs. Brown You’ve Got A Lovely Daughter”. From some raucous chording and some toggle switch clicking it’s more than obvious the inspiration was The Who and Noone again sings with a sneer about a loser who can’t back away from the card table. It ends with a bizarre rave up where “Punch And Judy” style voices respond to Noone’s complaining (in a very Northern accent) about the replacement of dustman by “mammoth machines that move noiselessly through the streets” and “I didn’t have the education to get a proper job…etc”. Weird, but as trippy as, well they could be. 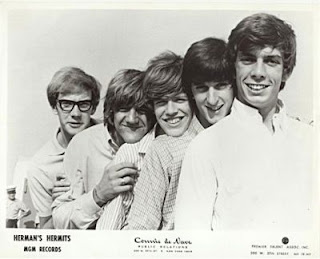 The Repertoire label reissued the LP on CD a few years ago with a slew of bonus cuts (including the wonderful and rare Graham Gouldman number “The London Look”, originally only available on an E.P. giveaway by Yardley’s Soap), or if you live in America you can go to any good used record store/flea market/thrift store and chances are, you'll find a copy!

"Museum" mimed with live vocals on "The Smothers Brothers Show":

Funny you should post about Herman's Hermits - just over Easter I was at my family's house, where Fox News is on the tube 24/7. I was treated to a truly ridiculous sight - Peter Noone on presidental candidate, Arkansas governer and reformed fatso Mike Huckabee's TV show, where Noone did "I'm into Something Good" with Huckabee playing bass. Good grief!