The Richard Kent Style are, in my estimation, mod 60's legends. All 5 of their 45's command hefty sums of money on Ebay whenever they crop up.  They first came to my attention in the mid 90's on a cassette tape a friend made of an assortment of obscure U.K./Euro 60's "mod" bands with the stellar "Go Go Children", a raw bit of r&b dashed with freakbeat. Hailing from Manchester, this six piece played high energy r&b .  I'm not going to attempt to give you their history BUT you can read about them here:

This was their first single, which was released in the U.K. on Columbia as DB 7964 in July of 1966. God knows what inspired the good folks at Coral to issue the 45 in the States (it came in both the stock black with rainbow label and promos in yellow like today's specimen). "No Matter What You Do" is actually the A-side.  It starts with a blast of horns meshed with some nice fuzz guitar and then the vocals come in and the whole thing goes sadly, "poppy" in a tepid weak Paul & Barry Ryan at their worst style.  Sad really because the intro leads you to expect something better!  But flip it over....ahhh!  "Go Go Children" is a classic.  From it's infectious riff to it's catchy "go go childer-uhn" chorus it's a kick.  The horns are punchy and have this sinister vibe to them like "Hall Of The Mountain King" or some Satanic scene from a Hammer horror film and groove along with while the vocals are soulful but have an almost cynical sounding inflection that implies "I don't give a *uck". 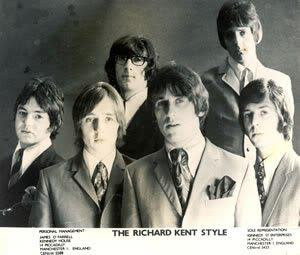 Sadly these tracks have not been officially reissued, "Go Go Children" cropped on an excellent bootleg LP/CD called "Echoes From The Wilderness" and all of their 45 tracks popped  on a bootleg LP called "Mod Meeting Volume One" (with The St. Louis Union on the other side of the LP).  What the world really needs is a legit Richard Kent Style compilation CD with all of their singles!

TRIVIA NOTE: Once whilst in NYC in the late 1990's I was in a British pub wearing a black suit with a checkered tie with my hair immuculately backcombed and I was stopped by an older English gent who imformed me "I had hair like that when I was a lad".  We got to chatting and it transpired he'd been a member of The Richard Kent Style!  When I rattled off a few of their song titles he loudly bellowed "*uck me!" several times in disbelief that anyone in the States was familar with his music.  I can't recall his name, and by the way, no he didn't have any spare copies of any 45's to give or sell me! When I returned to my table I discovered he'd sent me over a pint of Old Speckled Hen which was waiting, I looked back and he gave me the thumbs up and went on his way. That's rock n' roll.

Hear "No Matter What You Do":

Email ThisBlogThis!Share to TwitterShare to FacebookShare to Pinterest
Labels: The Richard Kent Style

I love your 'Trivia Note'. How satisfying - for both of you!