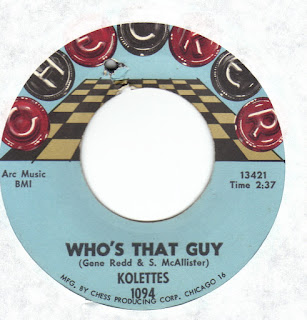 1. THE KOLETTES-"Who's That Guy" Checker 1094 1964
One of my fave Checker sides, I can't tell you much about the Kolettes, in fact from what I can tell this was their one and only single. But with a single like this you needn't worry about shortness of your discography as this is a killer and a classic mod/r&b dancer if ever there was one.

2. SUGAR PIE DeSANTO-"I Don't Wanna Fuss" Checker 1093 1964
Picking a fave Sugar Pie DeSanto single was tough. The diminutive Ms. DeSanto proves that you can't judge a book by it's cover and there's a whole lotta soul packed into this petite lady.  This one is definitely my fave by her! 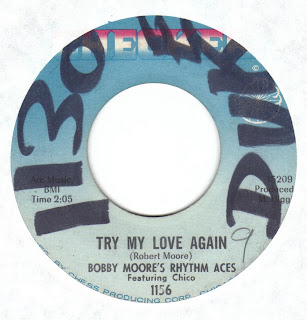 3. BOBBY MOORE & THE RHYTHM ACES-"Try My Love Again" Checker 1156 1966
Hands down my fave Checker 45.  It's almost Latin flavored rhythm with some jazzy brass punctuations and 1,000 times better than their "hit" single "Searching For My Love"". I got a heavy duty amount of mileage out of this 45 on the floors in the late 90's/early 2000's and if I was still spinning it'd be in rotation.


4. KO KO TAYLOR-"Wang Dang Doodle" Checker 1135 1966
This is some raw stuff kids.  Veteran blueslady Ko Ko serves it up raunchy and gritty. The record does not sound like it's from the date it was released and could've easily come from 3 or 4 years earlier!  If you don't know what I'm on about well there's nifty little clip below for you to suss!


5. ANDRE WILLIAMS-"The Stroke" Checker 1187 1967
A bit of groovy blues and funk with some sitar like guitar warbling while Andre croons about a groovy little juke joint where everybody gets down and dirty (with some annoying screams by some over excited female). I'm rarely impressed with Andre Williams because he's one of those cats everyone goes on about to the point that he's more legend and image than substance to me but this one I dig. 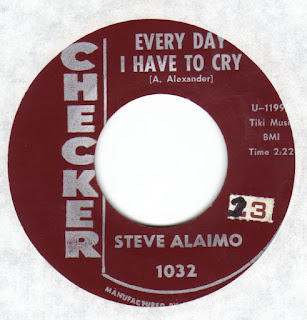 6. STEVE ALAIMO-"Everyday I Have To Cry" Checker 1032 1962
I'm rarely a fan of white guys covering r&b originals but I've got to say I prefer this version to the Arthur Alexander original,maybe more to do with the strings and brass than Steve's voice but hey I'm being honest. But I'm a fan of this version. So was Dusty Springfield who's version uses this arrangement as her template.

7.  TOMMY TUCKER-"Hi-Heel Sneakers" Checker 1067 1964
This was probably the first r&b 45 I owned after scoring an "oldies" reissue shortly after acquiring the "Quadrophenia" soundtrack in '81 and hearing this covered by some band called The Cross Section.  A prototype/blueprint for aspiring white (British) r&b bands everywhere.  Simplistic, almost predictable but delightful.

8. BO DIDDLEY-"Pills" Checker 985 1961
Bo's ode to pills should've been an amphetamine mod anthem of sorts owing to the original 60's modernists supposed predilection for the stuff.  Delivered tongue and cheek it's Bo's finest track in my humble opinion.  U.K. mod/r&b/ska boys Mickey Finn and the Blue Men dug it so much they cut it with a ska flavor which you can dig here. 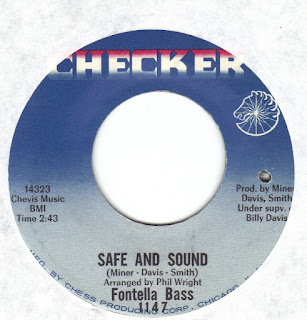 9. FONTELLA BASS-"Safe And Sound" Checker 1147 1966
Poor Fontella Bass.  She's forever linked with perhaps the most overplayed soul track of all time, "Rescue Me", which somewhere in America right now is playing on an "oldies" radio station.  Well she had a lot more to offer boys and girls. This being one of them, dig the congas! Though the refrain sounds a bit like "Rescue Me"...... 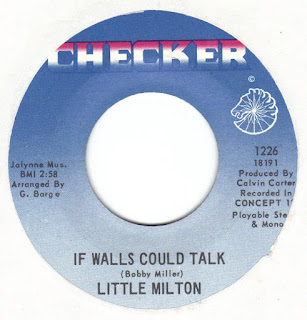 10. LITTLE MILTON-"If Walls Could Talk"  Chess 12226 1969
Little Milton's blues shouter style comes in loud and clear in this ode to sneaking around on the down low.  A bit late (December 1969) but it doesn't sound like it!

Honourable mention from me to Sugar Pie's "Here You Come Running" on Checker.