Chad (Stuart) and Jeremy (Clyde) had an interesting odyssey, far bigger in the States than in their home in the U.K. they were dubbed "Hollywood Yanks" after being based out there and appearing on a host of American TV shows like "The Patty Duke Show", "Batman", "The Dating Game" and Chad (along with fellow ex-pat Lord Tim Hudson) did the Liverpudlian vulture voices for Disney's film "The Jungle Book".

Strangely their U.S. 45 discography was more than double their U.K. output, their U.K. releases ended with 1966's "You Are She" while they continued to release U.S. singles on Columbia (whom they'd been with since 1965's "I Have Dreamed") right up till 1968.  Today's subject was their final U.S. 45 from the film LP soundtrack "Three In The Attic", technically their last long player, issued in October 1968. My copy is a double sided promo. It was also issued with a flip "You Need Feet (You Need Hands)" bearing the same catalog number. 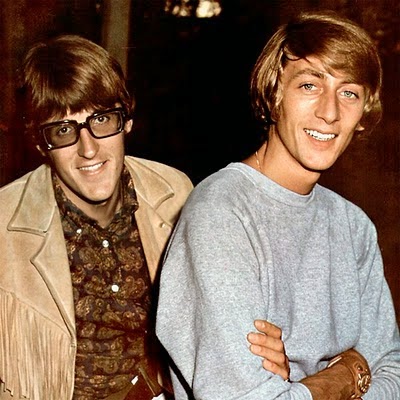 By 1968 they'd been generously afforded the opportunity to release two amazing yet commercially dismal albums, "Of Cabbages And Kings" (1967) and "The Ark" (1968), both recorded in the States with no expense spared with production by Gary Usher. "Paxton Quigley's Had The Course" was issued on the LP "The Ark" and was also used in the film "Three In An Attic" which starred Christopher Jones (shortly after his appearance as "Max Frost" in "Wild In The Streets") as Paxton Quigley a lothario held in an attic by three women. Easily fitting in with their material from "Of Cabbages And Kings" or "The Ark" (where it also closed side two of), "Paxton Quigley's Had The Course" is a lushly produced (by Gary Usher) pop psych ditty with an upbeat lilt, vocals through a Leslie, catchy acoustic riff, some funky cowbell and Fab Four psych pastiches towards the end (and what sounds to me like a cross between "S.F. Sorrow" meets The Moodie's "On The Threshold Of A Dream").  Certainly one of the freakiest thinks C&J ever concocted!

It is available on the CD reissue of "The Ark". Interestingly "Paxton Quigley" is the name of woman female firearms advocate....

Hear "Paxton Quigley's Had The Course":

Chad & Jeremy were also on Hullaballo several times. Once Chad & his then wife appeared to promote a single that they did while Jeremy was out doing an acting job. I find it interesting that Chad & Jeremy's songs hold up much better than Peter & Gordon's despite Peter Asher's cred (Jane Asher's brother, owner of the Indica bookstore)