Don't fuck with the classics, that's my maxim.  Well apparently in 1968 The Marmalade didn't worry themselves about that and not only cut a version of "Hey Joe" but gave themselves songwriting credits as well! But we're getting a bit ahead of ourselves here... 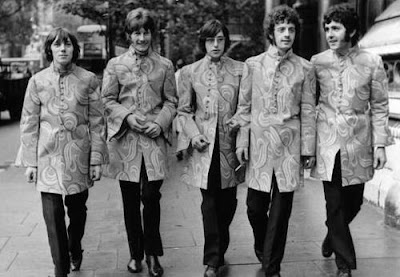 "Lovin' Things" musically sounds like The Love Affair with it's big production (arranged by Keith Mansfield) and heavy orchestration/horns which leads me to suspect that like The Love Affair there probably was a lot of session player involvement. It's not an awful track it's just a tad too pedestrian when stacked up against other smashes like "It's All Leading Up To Saturday Night", "I See The Rain" or "Man In The Shop" (the band's previous 45 releases). It sort of reeks of the cabaret sound that the band were firmly ensconced in by this time.

Despite the lack of originality in cover selections their interpretation of "Hey Joe" is actually pretty good.  It sticks predominantly to the Hendrix version musically but with an extra guitar track and cool harmonies and a faint organ playing the bit sung by The Breakaways on the Hendrix version. Surprisingly the guitar treatment on the version is actually rawer than the J.H.E. version.

Both tracks are available on the Marmalade CD compilation "I See The Rain: The CBS Years".

Bill, have you (or any of your readers) come across a fast folk-rock version of "Hey Joe" by a UK band? All the versions I have heard are derived from Hendrix. Interested to learn if anyone picked up on the song in the UK before Jimi hit the scene. Thanks a lot.