Philamore Lincoln is an interesting singer/drummer who had previously recorded as Julian Covey  (or Julien as his US 45 release is spelled).  Born Robert Cromwell Anson  he first used the name Phil Kinorra while drumming in a host of early 60's UK jazz/R&b bands prior to "becoming" Philamore Lincoln . In September 1968 he made his debut as Philamore Lincoln in the U.K. with "Running By The River"/"Rainy Day" on Nems (65-3711). His next release wasn't until May 1970 when "The County Jail Band" /"You're The One" was released on CBS (S 5007). Both tracks were released in the US in previously in March with the sides reversed, both tracks also featured on his highly recommended LP "The North Wind Blew South" (that was not issued in the U.K.) but issued in the US, Canada and Japan.

"You're The One" is alleged to feature Jimmy Page on lead guitar (in fact it first came to my attention on the bootleg LP "James Patrick Page Session Man"). It cuts an an amazing groove with it's congas/cowbell and atmospheric strings sawing in and out and a stoned/dreamy feeling with an amazing production and this wiggy guitar solo that bursts out of nowhere and vanishes. Lincoln's voice is cool, detached and almost ethereal.

"The County Jail Band" reminds me of Tony Joe White and his chunky white boy funk meets T Rex.  It's not unimpressive but it's just not something I'm into either. His vocals really remind me of Deep Purple's Rod Evans which redeems the tune somewhat. 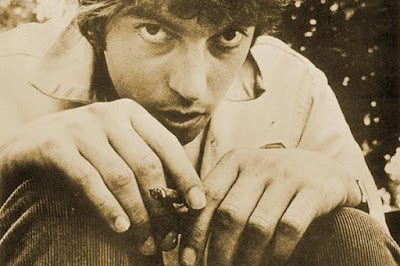 Both tracks are available on his earlier mentioned LP which has been reissued on CD and is well worth seeking out if you are into late 60's slick produced pop.

For a cool interview with Philamore pop on over here.

Lovely stuff- thanks for the tips.