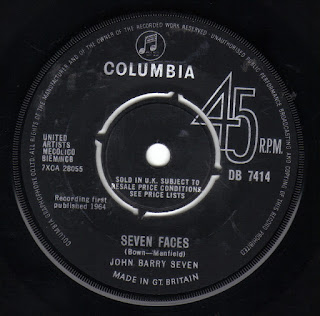 1. THE JOHN BARRY SEVEN-"Seven Faces" U.K. Columbia DB 7417 1964
The John Barry Seven's final single was oddly not the usual twangy/kitschy guitar instrumental that you would come to expect from them but a vocal number called "Twenty Four Hours Ago". But on the flip side we have an r&b instrumental dirge not at all unlike The Graham Bond Organization with powerful horns and subtle organ (in fact it reminds me of The G.B.O. under their "The Who Orchestra" guise on "Waltz For A Pig")!

2. THE FEDERALS-"Boot Hill" U.K. Parlophone R 5013 1963
Propelled by a Clavioline (the same sort of compact keyboard made famous by The Tornados "Telstar") this 1963 single also incorporates some spooky backing vocals at the intro and an equally eerie chorus of male vocals that also resembles something Joe Meek would have done, with of course a twangy/spacey guitar solo (possibly through a Binson Echorec).

4. CHRIS BARBER'S BAND-"Cat Call" U.K. Marmalade 598005 1967
Starting life as an early 60's pre-EMI Beatles McCartney penned instrumental called "Catswalk", U.K. jazz legend Chris Barber cut it in 1967 with Paul McCartney in attendance (he can be heard shouting "please play it slower" as well as adding crowd noise with then main squeeze Jane Asher). Much like some strip tease number its not without it's charm. 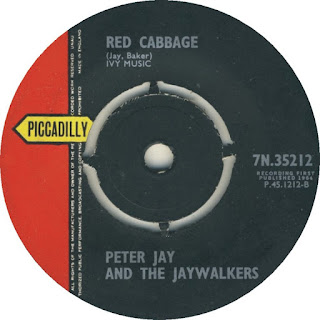 6. TONY MEEHAN-"Hooker Street" U.K. Marmalade 598016 1969
Often credited to Keith Meehan this tune is actually by his brother, ex-Shadow Tony and appears on the flip of the pedestrian ballad "Darkness Of My Life".  Sounding like something off of the "Vampyros Lesbos" soundtrack meets David Axelrod  this track is a total mind blast with vibes, fuzz guitar, groovy organ, spooky Gregorian chant backing vocals...witchy! 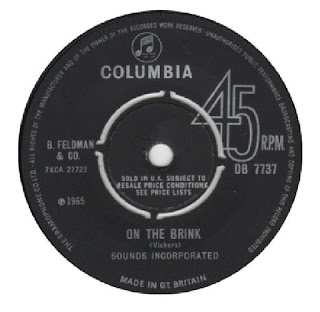 7. SOUNDS INCORPORATED-"On The Brink" U.K. Columbia DB 7737 1965
Sounds Incorporated took the recently departed from Manfred Mann's Mike Vickers May 1965 instrumental "on The Brink" and added a considerable number of horns to it making it less frantic than the original but still infectious.

8. THE DAVE DAVANI FOUR-"Workin' Out" U.K. Parlophone R 5329 1965
Not unlike something by The Brian Auger Trinity '65-'66 meets The Shotgun Express this organ fueled jazzy little instrumental is one of my favorite Dave Davani cuts right down the nifty little Wes Montgomery inspired guitar solo.

9. THE TORNADOS-"Stingray" U.K. Columbia DB 7687 1965
Following the Shadows May 1965 Barry Gray instrumental by four months, I've always found The Tornados version far superior thanks to all of producer Joe Meek's bubbling water/sound effects, tinny production and requisite male chorus all doused in echo and then compressed for good measure! 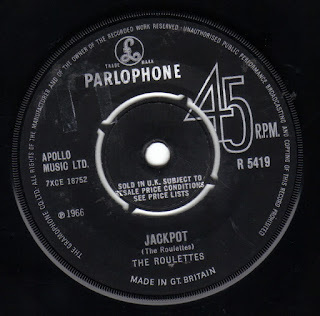 10. THE ROULETTES-"Jackpot" U.K. Parlophone R 5419 1966
On the flip of their competent  reading of The Miracles "The Tracks Of My Tears" The Roulettes pull off this amazing group composition that marries intricate electric piano reminiscent of the Zombies meets Ray Charles and some buzzing guitar that sounds like Steve Cropper jamming with Hank Marvin.  Excellent!!!
By William - February 23, 2017