For those not in the know Neil MacArthur was none other than Colin Blunstone, formerly lead singer with The Zombies who had spent the last year out of the music business working in an insurance office following the 1968 break up of The Zombies.

Conceived by producer Mike Hurst the "Neil MacArthur" venture lasted just shy of a year and resulted in three singles for Deram, all of which were released in the U.S. as well as the U.K. "She's Not There" was the first, issued in January 1969 on both sides of the Atlantic.  It was a curious choice given that it was the debut track by The Zombies. It reached #34 in the U.K. charts, but did not chart in the U.S.

Banish any thoughts of the jazzy electric piano led British beat group sound of the Zombies original 1964 single and clear your mind. Starting with an ominous symphonic beginning reminiscent of David Axelrod , Blunstone's vocals sound similar to the way he sings in the original version.  But over the top of quirky little guitar licks and sweeping, easy listening (as in the freaky soundtrack sort) orchestration,vibes and the jazzy flute solo make it sound "way out". Ditto for the way the number abruptly stops with the strings spiraling down like the tape was stopped.  It's really the phlanging strings that make it sound over the top (in a good way!). 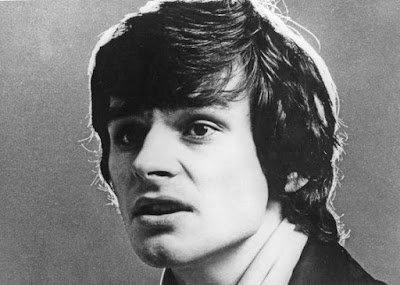 "World Of Glass" is a different bad entirely.  With it's tabla, harmonium and steel guitar it's like a trippy version of Ronnie Lane's Slim Chance (musically) or Donovan or Nick Drake on a good day. Sadly it's vocally not my thing as it sort of reeks of the early 70's "singer sing writer" feel and Blunstone's muezzin style chanting does nothing to endear it to me.

"She's Not There" was on a the 1987 LP compilation "Deram Days" and our faithful reader Joe Hedio reports both sides were compiled in a 2007 Big Beat compilation titled "Afterlife".