More U.K. Obscurities On U.S. Labels: The State Of Micky And Tommy


Long before he was in Spooky Tooth or Foreigner Mick Jones was one half of a British pop psych duo with Tommy Brown under the moniker of the State Of Micky And Tommy. Jones had previously served as a guitarist in French musician Ronnie Bird's backing band. The band issued a slim discography with just two singles in their home country and two in the US but two 7" E.P.'s and two 45's in France where they were clearly more popular.

"With Love From 1:00 To 5:00" (written by Jones and Brown)  is a slice of archetype '67 British psych pop with it's driving/brash Who-like backing track and then  layers of strings infectious pop hooks (and prerequisite chiming church bells). It had all the makings of a Summer of  '67 smash but alas it was not to be. Regardless of it's commercial success or lack thereof it's an amazing track. 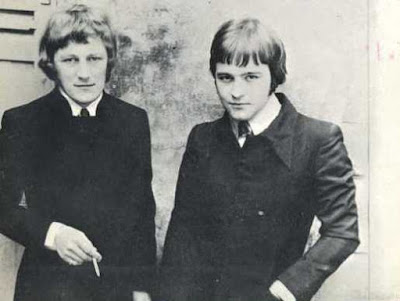 The flip "Sunday's Leaving", though not as good as the UK flip is not a bad track per se, just not terribly strong.  It's a mid tempo pop tune held together by some churchy Hammond and flourishes of sitar, nothing flashy or catchy like the brilliant A-side but not at all un-listenable either. It all ends abruptly like someone pulled the plug as the number grinds to a slow halt.

"With Love From 1:00 To 5:00" was unearthed by Bam Caruso for Volume 15 of their legendary Rubble series "5000 Seconds Over Toyland". "Sunday's Leaving" has yet to surface anywhere.