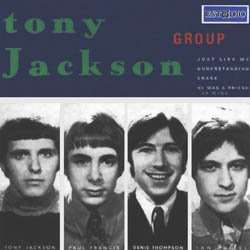 TONY JACKSON GROUP-Portuguese E.P. Estudio EEP 50013 1967
Though I rarely spend any money on 45’s/EPs/LP’s/CDs anymore owing to a tight budget (house, car, et al) there are a few select 7 inchers I’d still buy if they turned up. For many years the object of my desire has been a rare as hell 1967 Portuguese only pressing of a 7” E.P. by The Tony Jackson Group . For those not in the know Senhor Jackson was once the bassist/lead singer for a Liverpool combo called The Searchers . He left the band in 1964 and embarked on a career that left behind eight singles, four each on Pye and CBS respectively. Some credited to Tony Jackson and The Vibrations (best known by garage/60’s/freakbeat enthusiasts for their amped up/searing treatment of “Fortune Teller” which appeared in the late 80’s on a comp. LP called ”Trans World Punk Vol. 2” ), others to the Tony Jackson Group or some just simply as himself. Many of the latter CBS sides change hands for nothing less of $100 while the Pye sides tend to be slightly less. 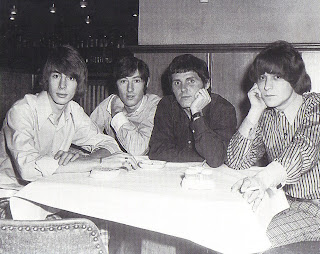 The mother of all Tony Jackson collectibles is an E.P. recorded in Lisbon, Portugal in 1967 as “The Tony Jackson Group”. The band had decamped there in early 1967 for a change of scenery and to bring British beat to the locals (the Portuguese 60’s scene is all but devoid of a  hip musical “scene” unlike their nearby Spanish neighbors). Legend has it that one of the band’s members had a brother who’s Portuguese girlfriend had a father who ran a radio station and liked what he heard. At his urging, as the story goes, the stations own Estudio label pressed a four song E.P. of the quartet (Tony lead vocals, Ian Buisel on lead guitar, Dennis Thompson on bass and Paul Francis on drums) bashing through four covers of contemporary favorites. For those who haven’t heard it, the E.P. opens with a blinding raw version of Paul Revere & The Raiders “Just like Me” (the whole E.P. was included on a CD of all of Tony’s 7” releases in 1991 on the Strange Things label titled “Just Like Me”, a similar CD was issued by Castle years later called "Watch Your Step: The Complete Recordings 1964-1966"). Tony’s raw vocals and Buisel’s almost sloppy chord chopping make the original sound tepid (esp. after the over the top raga guitar solo). The real treat however, is the next track. Covers of songs by The Small Faces rarely better the original. After hearing the band’s version of “Understanding” you might disagree. Maybe it’s the freshness of it’s delivery, maybe it’s because by the time I heard this version I was sick of The Mighty Midgets, either way it’s a monster. The E.P. then kicks into an amphetamine version of Sam Cooke’s “Shake”, sung by someone other than Tony coming across as a cross between Jimmy Winston and Chris Farlowe . It’s arrangement is pretty standard, akin to that of late mark Animals . The last cut is an odd choice, given that the first three cuts are revved up/crashing stormers a cover of The Byrds folky JFK tribute “He Was A Friend Of Mine” seems, well, weird. The E.P. was pressed as Estudio EEP 50013 and released in the summer of 1967 where it vanished without a trace until resurrected twenty four years later by the folks at the short lived Strange Things Are Happening label(an offshoot of the famous Bam Caruso label). The cuts have since cropped up on a more recent Castle Records CD containing the exact same track listing as the Strange Things release titled "Watch Your Step:The Tony Jackson Group Anthology". Since then it has been something of a unicorn among record collectors. I know of no one who owns one, let alone anyone who has ever seen a copy. Through my research I have been able to ascertain that the Estudio label was primarily an output for contemporary non-rock n’ roll Portuguese artists and fado music (a centuries old uniquely Portuguese style centering on impassioned vocals with lyrics about love, both the loss of or the yearning for, accompanied only by acoustic guitar and a guitarra, an eight, ten or twelve stringed mandolin sized instrument).

After becoming engaged to a woman who spoke Portuguese and making a trip to Lisbon I began to hatch my plans for securing a copy of the fabled E.P. A five year old “Time Out: Portugal” book listed a vinyl only shop called Discoleccao in Lisbon. Of course it had moved twice since the book’s publishing and thanks to some determined detective work on the part of my fiancée/translator we set off to find the shop in a stream of events that was like a cross between a police investigation and “Raiders Of The Lost Ark”. Nestled away in the Bairro Alto neighborhood of Lisbon, finding and getting to the shop was no small feat. The streets and alleyways of Bairro Alto are cobblestone and rise and wind without warning to inclines that require momentary pauses for catching one’s breath and getting one’s bearing (each block within a street has it’s own name, though the street address does not always indicate this). At last we found it, atop a hill of the Calcada do Duque Street. CLOSED till January 4th the sign on the door said. But windows plastered with a Euro Scott Walker 45 sleeve, a French Animals EP sleeve, a Max Roach LP, a Portuguese Mingus gig poster etc told me I might yet be back in luck. A week later we returned on January 4th. The doors were opened and in we walked, the air was loud with the excited near shouts between a group of Portuguese record nerds who looked to be in their late 50’s/early 60’s. I was making a beeline to the stacks of 7” records when in that instant the group of gentlemen got even louder, they were yelling, not in an angry way, but in the jovial/excited manner. I understood little because my Portuguese is limited to greetings and exchanging pleasantries, but two words were being repeated over and over by all and sundry: TONY JACKSON. I sent my fiancée over to eavesdrop. It would seem they were all in disagreement on how much the fabled EP was worth. One said the internet had it listed as this, another offered his theory, no one could agree on it’s value. Obviously I would not be finding a copy in this store, or anywhere in Lisbon after a sheepish inquiry through my interpreter with the stores friendly owner who assured us “it was VERY VERY rare”. Contented I left with a French Georgie Fame EP, a UK LP by him, a Dutch 60’s Who LP and a Brazilian Gilberto Gil 45.When I returned to the States I did some online searching and found the the EP had been offered on E-bay a short time ago in VG condition with a minimum bid of 999 GBP sterling. There were no takers. Further digging revealed that in 2004 a Belgian collector parted with a Mint copy (with a VG+ sleeve) on E-Bay for a final sale of $2,600.00 USD!I might still find a copy, maybe in some milk crate of used records and books on some back street in Lisbon or in some sleepy little Portuguese village within a pile of dusty/destroyed fado records. But I’m not holding my breath……….

For the curious traveler to Lisbon, Discoleccao offers a small but diverse collection of used LPs/45’s/EP’s from all over the world (especially Portugal and Brazil). There is fair share of Euro/Brit 60’s beat/psych/pop, most of which are in colorful sleeves. The owner is well aware of his merchandise and it’s value, but his prices are quite fair. Discoleccao, Calacada do Duque, 53-A, 1200-156, Lisboa, Portugal Tel:213 471 486

Note: In 1991 Tony Jackson put the Tony Jackson Group back together briefly with aid of drummer Paul Francis billing themselves as "Tony Jackson & The Vibrations" to capitalize on the Strange Things CD anthology comp, but this was short lived. Tony's bouts with alcoholism left him unable to walk without the aid of a cane or able to play bass. He served eighteen months in prison in 1997 for threatening a woman with a pellet pistol and sadly passed away on August 18, 2003 from cirrhosis of the liver.

Excelent blog entry and most enjoyable to read...

The Tony Jackson Group really are one of England's best kept secrets.

My favourite song of their's is 'You're My Number One'

I wonder if you know that the book The Streets of Our Town by Brett Milano has a rather amusing story of how Mono Man of the Lyres tried to acquire this very EP.

I was a member of the band that made that EP, I was the bass player, Denis Thompson. We made this EP as if we were playing live, theres even a guitar miscue on shake, Ian Buisel sang shake. The whole recording took no more than 2 hours. had a great tome in Portugal working with Sylvie Vartan and Johnny Halliday

Denis, thank you for writing! I was just reading a book last week (provided by a person that reads this blog, cheers Joe!) called "Vinyl Junkies: Adventures in Record Collecting" and a recurring theme in the book is one Jeff "Monoman" Connelly of the U.S. band The Lyres and his repeated (and unsucessful)attempts to secure a copy of this E.P.!

Yea I know it;s pretty rare, funny, I have gone through my life not thinking about it much, spoke with a buddy of mine in England, he has the very first copy pressed, in mint condition. My favorite song was Understanding as it was written by a mate of mine, also a member of my first band, Steve Marriott. If you get a chance listen to Steve's daughter Mollie, a great voice and talent.

Denis,I did not not you and Steve Marriott were in a band together! I would love the opportunity to send you some interview questions if you'd be willing. If you are you can send your e-mail address to me at:
anorakthing@gmail.com