The impact of US folk singer P.F. Sloan on American pop music is legendary, but what about his impact on Britain? Herman's Hermits were his biggest champions scoring hits with his compositions "A Must To Avoid" and "Hold On" as well as recording "Where Were You When I Needed You" and "All The Things I Do For You Baby" among others. Lorraine Silver, Freddie and the Dreamers, Twinkle, The Paramounts and Ivan's Meads joined the list of other British artists who recorded his material. It is the latter who's reading becomes our subject for today's post.

Ivan's Meads were a moddy Manchester r&b five piece comprised of Ivan Robinson (lead vocals), Pete Dempsey (sax), Keith Lawless (bass), Alan Powell (drums) and John Mayall's half brother Rod "Stan" Mayall on organ. The debut single was this October 1965's reading of P.F. Sloan's "Sins Of The Family", which unfortunately for the band saw the release of Sloan's version on the very same day on RCA complete with an obligatory Ready! Steady! Go! appearance to ensure that the Ivan's Meads version never stood a chance. The track was chosen by the band's management for them to record in the hopes of scoring a hit.

Their version of "The Sins Of the Family" eschews the folky Dylan feel of the original by rocking it up considerably adding Hammond organ and the lead singer having a snotty delivery.  It's not terrible but it's not remarkable either outside of the tasty organ.

The real gold lies in the flip, "A Little Bit Of Sympathy". Penned by bassist Keith Lawless it's a brilliant little British r&b "Hammond n' horns" gem that sounds like somewhere between '64 John Mayall's Bluesbreakers meets The Graham Bond Organization. Both sides were produced by George Martin.

The band had one more single the following year, a crack at the Toni Wine/Carole Bayer tune "We'll Talk About It Tomorrow" which although beating The Mindbenders version to a release by a year failed to chart. As in the case of today's subject the flipside was another band original, a mod/r&b G.B.O. influenced Hammond n' horns instro groover called "Bottle". 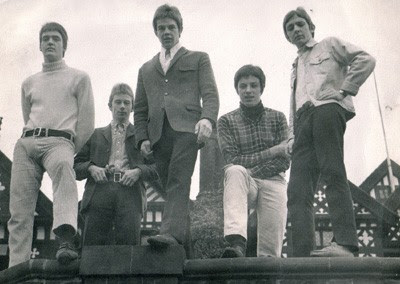 "Sins Of the Family" kicks off Volume Four of the "Beatfreak" UK 60's CD collection while "A Little Bit Of Sympathy" can be found on their sixth volume as well as Past & Present's amazing Brit mod/r&b collection "New Directions 1: A Collection Of British Blue Eyed Soul 1964-1969".

I would like to pay special thanks to the Eight Miles Higher blog's post on Ivan's Meads. Without their assistance I would not have been able to piece together a background on the band to complete this piece.

Hear "Sins Of The Family":

Hear "A Little Bit Of Sympathy":