Sweden's Sixties quartet The Tages (or simply "Tages" as they are known) are my favorite European band from. Though their career was brief (1964-1968) they ran a gamut of musical styles and genres that spanned just under thirty singles/E.P.'s and five albums in their home country. They began by embracing Beatle-esque beat music, then merging that with Pretty Things/Downliners Sect style r&b, then quickly onto Who inspired mod/power pop while simultaneously attempting soul music and balancing by embracing sunshine harmony pop and then, finally, slickly produced psychedelic pop. With all that in just four short years I thought it would be interesting to select some of their best sides from their varying and interesting career. All original 60's pressings/releases listed are Swedish. 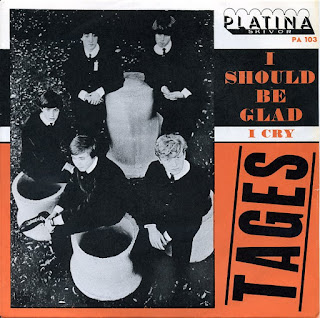 1. "I Should Be Glad" Single A-Side Plantina PA 103 1965
The band's second single "I Should Be Glad" owes as much to the Everly Brothers as it does to British beat music. With it's acoustic guitar driven "Beatles For Sale" sound and layered harmonies it could be easily mistaken for an obscure mid tempo mid 60's British beat single. Subsequent singles would be more rocking. 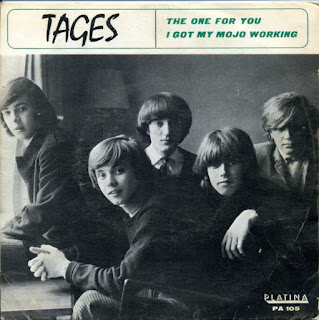 2. "The One For You" Single A-Side Platina PA 105 1965/ LP track "Tages" Platina PALP 3001 1965
The Who were massive in Scandinavia in the mid 60's and the band's fourth single sees a marriage on convenience of their Beatles/Hollies inspiration and London mod four piece. With its noisy guitar intro and a complete mod/r&b rave up during the guitar solo The Who influence is easily felt, and all without losing the band's trademark harmonies and high backing vocals.

3. Crazy Bout My Baby" A-Side single Platina PA 125 1966/LP track "Tages 2" Platina PALP 3002 1966
Released by Liverpool's Swinging Blue Jeans exactly a year before this version, the Tages rendition is slowed down a tad more but somehow harder and more rocking. The Blue Jeans version has a flute solo whereas this version has a kitschy little organ solo that works well with the tunes quasi Flamenco feel.

4. "The Man You'll Be Looking For" Flexi disc track Bildjournalen Go Go Skiva 66 1966
Issued on a free three track flexi disc with the "Bildjournalen" music magazine alongside a track each by the Strangers and Ola and The Janglers, "The Man You'll Be Looking For" is a beautiful mix of the band's Pretty Things/r&b phase colliding with mod/freakbeat. It has thundering, melodic bass lines, a double timed r&b beat and distorted as hell guitars with a harmonica solo to wrap it all. It was also issued as a single in Norway (His Masters Voice AL 6137 1966). It was my introduction to the band via the excellent "Searchin' For Shakes" 1984 compilation album of Swedish 60's sounds. 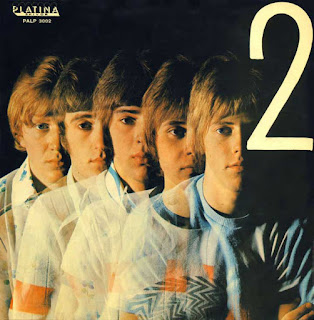 5. "Jealous Girl" LP track "Tages 2" Platina PALP 3002 1966
The band rocked up this Johnny Kidd and the Pirate's June 1964 single by adding a heavy guitar riff to it and doubling the timing, chucking in some frantic drumming and choppy chord bashing that turns it from a beat ballad to a a proto freakbeat stormer. 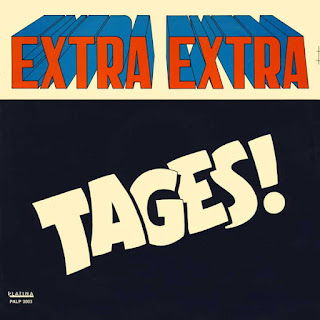 6. "Secret Room" LP track "Extra Extra" Platina PALP 3003 1966
Kicking off with some backwards bits and lots of poppy "la la la's" "Secret Room" is a creepy pop psych number about a little boy watching his parents have sex through a spy hole in his room! Cringe worthy lyrics aside its one of the highlights of the band's lackluster third LP "Extra Extra" where it sits uncomfortably among half baked soul/r&b covers and mediocre originals. 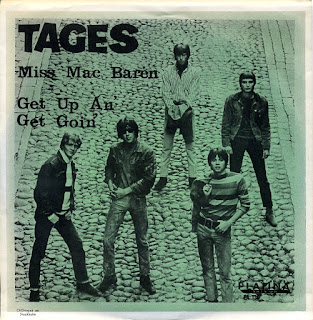 7. "Miss Mac Baren" Single A-Side Platina PA 130 1966
Hastily written in a cafe prior to a recording session after spying an advert on the wall for Mac Baren pipe tobacco, "Miss Mac Barren" would be the band's tenth single for the Platina label. Accented by their tight harmonies and some quirky keyboards and jangly, biting guitars it's one of their strongest singles.

8. "My Home Town" LP track various artists compilation "Popligan-For Och Flkting 67" Sveiriges Radio PRH 5003 1967
One of the band's most interesting tracks was this rare gem that was only available on a various artists compilation LP put out by a radio station with proceeds going to support a refugees charity. "My Home Town" is a beautiful track that reminds me of something the Kinks would have done in '66 or '67 and in grand Ray Davies style tradition the lyrics tell a story. It's about a young man heading home to the town of his birth where a delegation awaits him at the station to give him the key to the city and fete him. When he arrives there is no one there to greet him. Was it was all a delusion/fantasy or, as he sings "must have taken wrong (sic) train home to town"?

9. "She's Having A Baby Now" Single A-Side Parlophone SD 6009 1967
The band skirted controversy in Sweden when they released this social observation about an unwanted pregnancy. Backed by some cheery harmony backing vocals and cheeky disposition it's delivery belies the seriousness of the song's topic. Check out the band in all their Who-aping greatness miming to the track on Swedish TV in the link below. 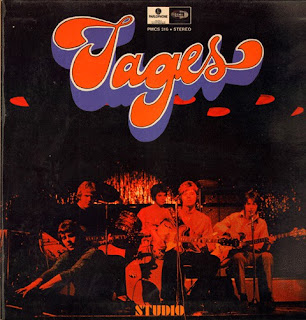 10. "She Is A Man" LP track "Studio" Parlophone PMCS 316 1967
The Tages tackled the subject of transgender persons long before The Kink's "Lola". Whereas the protagonist in "Lola" knows what she is and the track is a love song (essentially) the "she" in "She Is A Man" is far more sinister and unwilling to disclose her secret (check out the dialogue sequence in the middle where some very campy/effeminate voices joke about the hapless love interest who "didn't know"). Chuck in some "Revolver"-esque drumming, backwards guitar and falsetto voices and you have a masterpiece!

11. "Seeing With Love" LP track "Studio" Parlophone PMCS 316 1967
The Tages were subsidized by the Swedish government for the inclusion of traditional folk Swedish instrumentation on their records and its no better illustrated on this track that starts with a burst of distorted "Revolver"/"Sgt. Pepper"style guitar before drifting into a dreamy bit with the curious cacophony of traditional wood wind instruments before bursting forth into an amazing harmony pop number with horns, choral bliss and backwards bits.

12. "Have You Seen Your Brother Lately" LP track "Studio" Parlophone PMCS 316 1967
Probably one of the strongest tracks on the the band's fourth LP "Studio" is "Have You Seen Your Brother Lately", a beautiful bit of pop psych tune with zooming bass, violins (provided by two eminent Swedish classical musicians) and a wonderful social observation that bounces along with a Beatlesque '66-'67 feel. 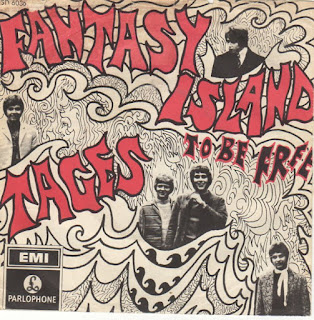 13. "Fantasy Island" Single A- Side Parlophone SD 6036 1968
Probably the band's heaviest and freakiest track was this May 1968 single that features ethereal Hammond, vocals through a Leslie speaker, folky fiddle bowing, raga guitar licks and of course some angelic harmonies. The lyrics are incredibly deep too, no mean feat considering they were written in English, the band's second language. 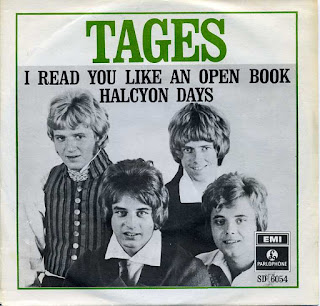 14. "I Read You Like An Open Book"  Single A-Side Parlophone SD 6054 1968
The band, reduced to a four piece following the departure of lead singer Tommy Blom, issued this final single recorded in the UK and produced by Mike Hurst. Sounding like every bit of Sweden's answer to the "Pet Sounds" era Beach Boys the number its almost bombastic at times but works. It was also the band's only US single. Check out the band's horrendous hairstyles and attire on the picture sleeve above!

15. "I See The Rain" Swedish Radio Session 1968
The Tages cut this searing version of Marmalade's "I See The Rain" fattened up with guitarist Danne Larsson playing an eight string Hagstrom bass instead of guitar alongside bassist Goran Lagerberg for a Swedish radio broadcast. It's chunky and ham fisted at times but excellent. The band cut a version of Moby Grape's "Hey Grandma" at the same session.