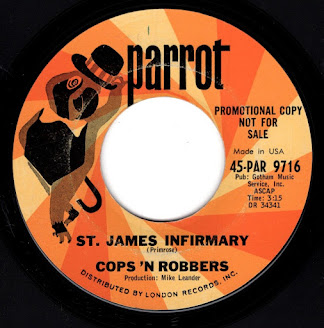 Watford, England's r&b quintet Cops N' Robbers issued just three 45's in the U.K., their debut November 1964's "St. James Infirmary" b/w "There's Gotta Be A Reason" was launched as Decca F 12019. It was simultaneously released in the States on Decca's U.S. offshoot Parrot (behind releases by Lulu, The Zombies and Billy Fury and a host of other "British Invasion" acts).

"There's Gotta Be A Reason" was my introduction to the band, appearing on a the second volume of the German various artists album series "Broken Dreams: The Hopes And Glories Of British Rock 1963-1969", while it's flip "St. James Infirmary" soon came on my radar via See For Mile's "Sixties Lost And Found Volume Three" compilation LP. 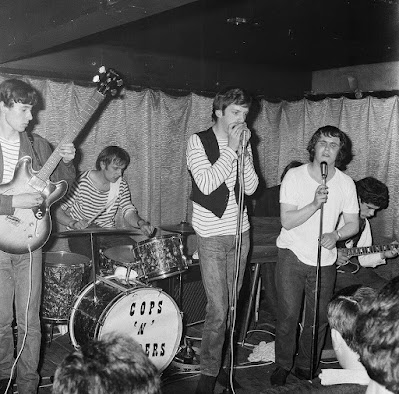 "St. James Infirmary", a blues tune dating back to the 1920's was covered by a host of British 60's r&b bands but Cops N' Robbers take the prize for the first band of the genre to record it for a release (it was later covered by The Graham Bond Organization, Georgie Fame and Eric Burdon & The Animals, to name a few). I've never been a huge fan of the track, but Cops N' Robbers give it a go with just simple organ and some baleful singing. There's a harmonica solo, but my brain keeps playing Dick Heckstall Smith's amazing sax solo on The before mentioned G.B.O. version in it's place!

Then there's the flip side, "There's Gotta Be A Reason", which to my ears is the far superior of the two tracks and would have made a far stronger A -side. Driven by a monotonous yet catchy, slow riff it's filled up nicely by some combo organ trills reminiscent of Alan price on those early Animals records and cool call and response backing vocals. The lead vocalist sounds almost snotty and detached which to my ears just oozes cool.

Neither side has seen a reissue in a really long time, with "There's Gotta Be A Reason" popping up on Decca/Deram's excellent "The R&B Scene"comp in the late 90's (and a vinyl only reissue a few years ago). There was an unauthorized Cops N' Robbers LP/CD collection put out by a certain dodgy label in Pennsylvania in the late 90's but we don't condone bootlegs.

Hear "There's Gotta Be A Reason":