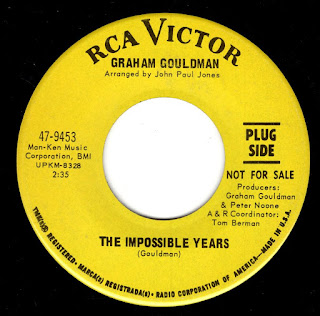 1. GRAHAM GOULDMAN-"The Impossible Years" RCA Victor 47-453 1968
As a member of The Mockingbirds and author of a multitude of hits for The Hollies, The Yardbirds, Herman's Hermits etc, Graham Gouldman  had quite a high profile in the 60's. In 1968 RCA Victor issued an LP in the U.S. of his versions of his own material (several of the tracks previously recorded by other artists). Two U.S. only singles were issued from the LP, the first of which was this number, previously recorded/released in the U.K. by Wayne Fontana. Gouldman's version is far superior in my mind due in no small part to the lush orchestration/woodwinds beautifully arranged by John Paul Jones. Though Peter Noone is given production credits Gouldman asserts that Noone was never seen during the recordings.
https://youtu.be/ZqUvi3IBLcQ 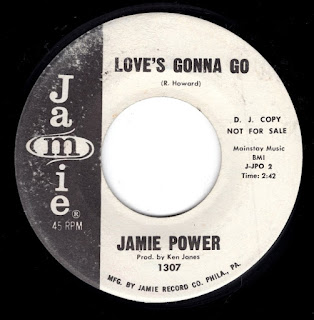 2. JAMIE POWER-"Love's Gonna Go" Jamie 1307 1966
This was the B-side of U.K. r&b performer Duffy Power's second U.S. single for the Jamie label under the curious moniker of "Jamie Power" (the topside was a fairly mundane version of "There's No Living Without Your Loving", previously cut by Manfred Mann). "Love's Gonna Go" is a moody r&b ballad with some bluesy guitar, mild instrumental backing, a harmonica solo and Duffy's powerful blues belter of a voice. Strangely it was also used a the B-side to it's U.S. predecessor "She Don't Know" (Jamie 1299 1965).
https://youtu.be/8KB5lZQv2vw 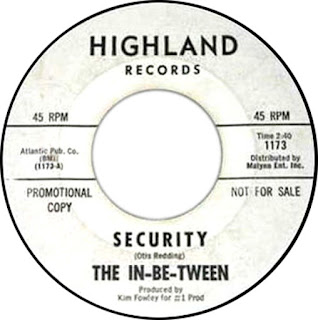 3. THE IN-BE-TWEEN-"Security" Highland 1173 1966
Possibly one of the rarest and most sought after U.S. singles by an obscure U.K. group is this 45 by The In Between's (credited here as "The In-Be-Tween") who of course later became Ambrose Slade and then finally Slade. Their frantic, evisceration of Otis Redding's "Security" is pure full on freakbeat as the band plow through through it with their Black Country soul cover band beat gusto. Though uncredited on the label the record was produced by Kim Fowley.
https://youtu.be/nkO7J1fwtJw 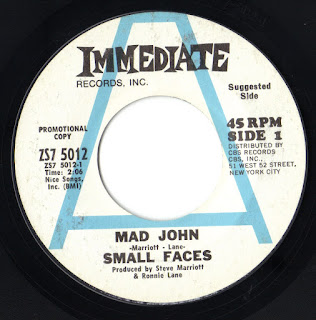 4. SMALL FACES-"Mad John" Immediate ZS7 5012 1968
Immediate records issued this U.S. 45 (it was also released in Canada and Australia) coupling two tracks from the band's "Ogden's Nut Gone Flake" LP (the B-side was "The Journey").  Both tracks are slightly edited with Stanley Unwin's narration removed from them. "Mad John" actually contains a longer musical passage at the end with Marriott's almost Celtic "aye diddley aye die die" repeated twice instead of once like the LP version.
https://youtu.be/zo9TMeI3Gp0 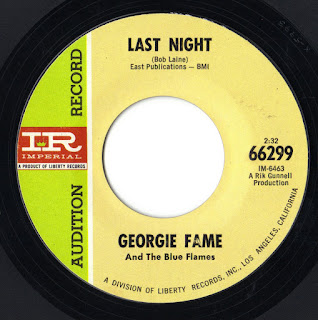 5. GEORGIE FAME-"Last Night" Imperial 66299 1968
Attempting to capitalize on Georgie Fame's sudden U.S. success with "The Ballad Of Bonnie And Clyde" on Epic records, his previous U.S. label Imperial pushed out this curious single containing an edited LP track (shortened by almost three minutes), a cover of The Mar-Key's  instrumental "Last Night" as an A-side. Curiously the edited mix had previously been utilized by the label as a B-side to their 1966 pressing of "Sitting In The Park" (Imperial 66220 December 1966). The edit retains the segment where the band launch into a few bars of The Rolling Stone's "(I Can't Get No) Satisfaction" and fades out prior to their going into snatches of Martha and The Vandella's "Nowhere To Run".
https://youtu.be/SUGCJLW2_qI 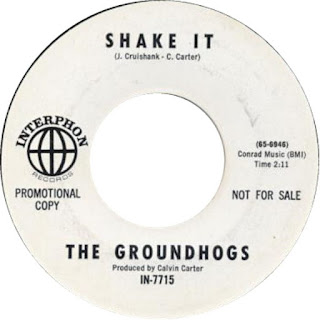 6. THE GROUNDHOGS-"Shake It" Interphon IN-7715 1965
Rock lore has it that British late 60's blues monoliths  The Groundhogs secured this U.S. only release thanks to intervention from the man himself John Lee Hooker, who they had backed on a U.K. tour. Regardless whether that's true or not "Shake It" is a frantic slice of primordial British r&b: wailing harmonica, bluesy "Baby Please Don't Go" style licks and driving Nicky Hopkin's style stride piano, a far cry from their later heavy monolithic blues.
https://youtu.be/LVktktxyKDY 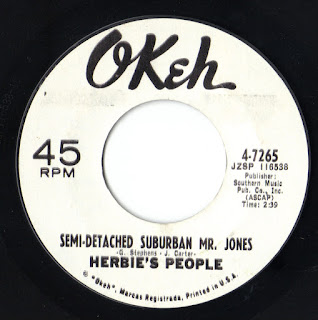 7. HERBIE'S PEOPLE-"Semi Detached Suburban Mr. Jones" Okeh 4-7265 1966
Okeh launched this U.S. only cover of the Carter/Stevens tale of marital jealousy exactly at the same time that Manfred Mann's version was being released in the States on Mercury. Interestingly Herbie's People retained the original title while Manfred Mann changed the "Jones" to "James" so as not to sound like a kiss off to their recently departed lead singer Paul Jones. Though lacking the charm (and Mellotron) of the Manfred's version this one gets plaudits for it's effort.
https://youtu.be/bDr-a-fAoN8 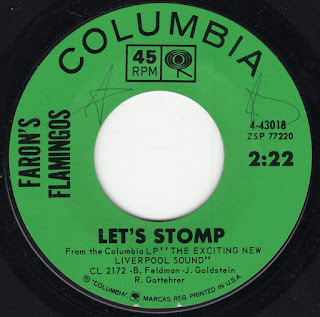 8. FARON'S FLAMINGOS-"Let's Stomp" Columbia 4-43018 1964
Liverpool's Faron's Flamingos, like The Big Three were known as  "musician's musicians" and though their vinyl output was slim (just two singles in the U.K.) they were swept up in the A&R man blitz of Merseybeat and afforded one single in the U.S. (split with Rory Storm and The Hurricanes). Their version of Bobby Comstock's "Let's Stomp" is pure adrenaline acting as father/mother and midwife to The Sweet's "Ballroom Blitz" and later, The Milkshakes.
https://youtu.be/1Tr--RyoSkM 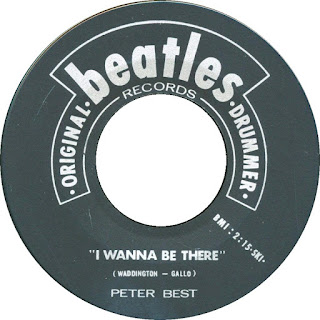 9. PETER BEST-"I Wanna Be There" Original Beatles Drummer Best-800 1965
This is one of the many Pete Best 45's issued in the United States after Best and his  group were brought to NYC in 1965 by producer Bob Gallo (he also shipped The Undertakers over at the same time). "I Wanna Be There" is an almost soul tune of sorts, though the vocals are a bit rough by vocalist/bassist Wayne Bickerton (Pete Best was merely the drummer and sang on none of the New York recorded Gallo releases) but it's still a decent tune and shows promise. Bickerton and his then band mate Tony Waddington (guitar) would later go on to cut the track with the U.K. based South Carolina female soul trio The Flirtations for Deram released on both sides of the Atlantic in different configurations. Gallo shares writing credits on the label with Waddington though all Flirtations versions of it bear the Bickerton/Waddington song writing credits.
https://youtu.be/tUKGGfmClBc 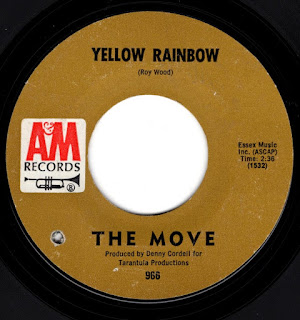 10. .THE MOVE-"Yellow Rainbow" A&M 966 1968
A&M had been the outlet for all of the Move's U.K. Regal Zonophone singles ("Flowers In The Rain" and "Fire Brigade"). They did however pass on the band's debut untitled LP for a U.S. release but curiously chose "Yellow Rainbow", an LP track as their next U.S. single issued in August of 1968. "Something" was the B-side, which would wind up as the flip of the band's November U.K. single "Blackberry Way" (reused again in February '69 for the U.S. pressing of "Blackberry.."!!). "Yellow Rainbow" is an apocalyptic vision sung by the band's rhythm guitarist Trevor Burton full of backwards bits and thundering bass care of in house glamor boy Christopher "Ace" Kefford. It was not issued anywhere else as a single.
https://youtu.be/doDzdxAs0OU
By William - September 04, 2020