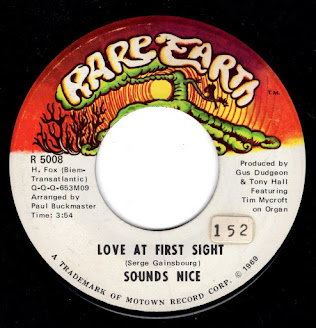 SOUNDS NICE-Love At First Sight/Love You Too US Rare Earth R 5008 1969
I have always disliked Serge Gainsourg and Jane Birkin's "Je T'Aime Mon Non Plus", I'm not a prude but it's gross to my ears. Just the idea of that scruffy tramp Gainsbourg being intimate with anyone, let alone on record, real or faked is just enough to make me lose my lunch. That said I always liked the melody of the tune.
Then along came Sounds Nice, a U.K. easy listening instrumental venture that was the brainchild of Decca A&R man Tony Hall comprising of arranger/producer Paul Buckmaster and organist Tim Mycroft. They covered "Je T'Aime.." as "Love At First Sight" at the suggestion of Hall who heard the original in France (it was notoriously banned upon it's June '69 release in Britain). Issued here in the U.S. on Motown's predominantly rock n' roll off shoot Rare Earth in September 1969 it failed to make any ripples in the US despite charting in the U.K. (strangely it was issued here a month before it was in Britain). Wrapped in swirling organ accompanied by lush orchestration, "Love at First Sight" is the encapsulation of kitsch easy listening, but the funky organ and bass/drums really swing. Legend has it the band's name came from Paul McCartney's comment when Tony Hall played the newly completed project for him.
The flip "Love You Too" is a quaint B-3 led instrumental with sophisticated strings and congas that would not be at all out of place on Roy Budd's "Get Carter" soundtrack. 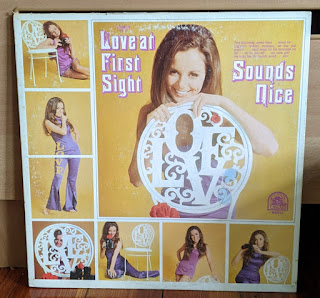 Both tracks are available on the sole Sounds Nice LP "Love At First Sight" on Rare Earth ( See photo above) that's chock full of groovy Hammond instrumentals like the brilliant reading of the Beatle's "Flying" and a total Swinging London Hammond groover "Continental Exchange" that would have made an amazing 45! It's fairly easy to find and relatively inexpensive.
Hear "Love At First Sight":
https://youtu.be/3RQ-dZ7c8w0
Hear "Love You Too":
https://youtu.be/YszkSf3phpg
By William - September 25, 2020