The Sound of '67: The Pink Floyd's Debut 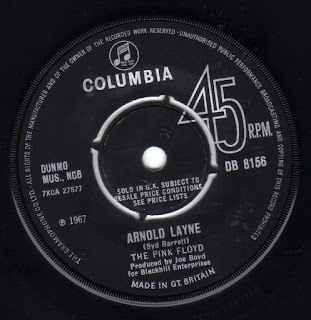 On Sunday January 27th of 1967 Princeton, New Jersey born and bred (local boy makes good!) producer and former Elektra records U.K. A&R man Joe Boyd was in Sound Techniques studios with his new findings a London based four piece called The Pink Floyd.  Boyd had previously left Elektra after offering them The Move, Tomorrow and The Pink Floyd. After three resounding replies of "No!" from his label boss Jac Holzman back in America he decided to resign and start his own production company and immediately sought out British bands to record. He had worked with the Pink Floyd earlier that month cutting an alternate version of "Interstellar Overdrive" and "Nick's Boogie" for Peter Whitehead's film "Tonight Let's All Make Love In London" (these tracks would not be officially released in their entirety until 1991).
The end results of the session on January 27th yielded a finished product of two recordings, "Arnold Layne" and "Candy And A Currant Bun", both band originals penned by the ir lead singer/guitarist Syd Barrett. The band's managers Peter Jenner and Andrew King (aka Blackhill Enterprises) shopped these tracks around as a demo. After a back and forth with Polydor and EMI the band ultimately went with EMI who signed them to their Columbia outlet. In an unusual move EMI chose to release the finished product as their debut single rather than re-record it with their usual staff production crew (standard label policy at the time allegedly). The downside was that EMI artists were only allowed to be recorded by EMI staff at their Abbey Road studios which unfortunately meant that out intrepid hero Joe Boyd's production assistance was no longer required. One can't help but wonder what a Boyd produced version of the band's debut LP "Piper At The Gates Of Dawn" might have sounded like.
"Arnold Layne", a cautionary tale of a cross dressing man who steals women's unmentionables off of their laundry lines late at night has grown into legend. Roger Waters and several associates of the band maintain that "Arnold" was based on a real life individual in Cambridge, where the band were from. Syd himself mused "Arnold Layne happens to dig dressing up in women's clothing. A lot of people do so let's face up to reality" (Melody Maker April 1, 1967). Though the not banned by the BBC (it rose to a respectable # 20 in the U.K.) it was banned by those intrepid underdog's at Pirate Radio's Radio London (who's financial backers were decidedly unhip). The band filmed a black and white promo film for "Arnold" in February 1967 at the seaside in East Wittering, West Sussex utilizing a variety of masks and a tailor's dummy. 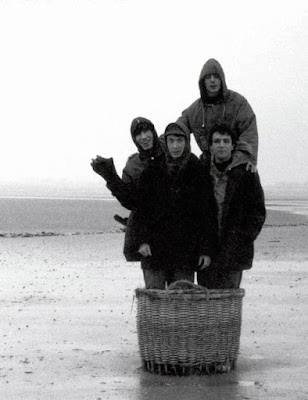 "Arnold Layne" was and is like nothing else in the charts in March 1967 when it was released. Though The Beatles' "Penny Lane"/"Strawberry Fields" was certainly pretty way out the rest was the likes of Petula Clark, Engelbert  Humperdinck, Vince Hill etc. Chart contemporaries aside "Arnold's" strength is in it's freaky Farisa organ solo care of Rick Wright and Syd Barrett's unique lyrics. Syd's vocal delivery sounds almost disinterested at times.
The flip "Candy And A Currant Bun" (originally titled "Let's Roll Another One") is far more freaky. With it's high pitched backing vocals accented on the end word of each verse and distorted guitar intro it's clearly going to be something way out. The guitar/keyboard solos are full on freakouts and possibly the closest a Pink Floyd 60's single got to replicating the experimental madness that their live gigs were known for. Wright's Farfisa noodling sits perfectly with Barrett's feedback and Zippo on Fender Esquire guitar technique. Contrary to what you may read on the Internet (YouTube in particular) there are no recordings of the number as "Let's Roll Another One" and anything you hear are clever fakes at best.
Both sides are available in a host of places, most recently the "1965-1967 Cambridge St/ation (sic)" collection and the similar "Pink Floyd-The Early Years 1967-1972" collection.
Hear "Arnold Layne":
https://youtu.be/H3DGpINHX5Q
Hear "Candy And A Currant Bun":
https://youtu.be/MboUz0fJb6w
By William - September 18, 2020