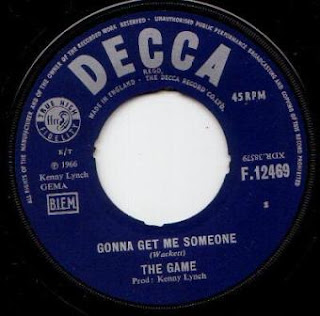 
Oh boy we're into some good stuff here boys and girls. The Game, for those of you not in the know were an incredible U.K. 60's band who cut five very definitive singles in '65-'67(all of which are quite collectible). I was fortunate to get my mitts on the first two back in the day, this one was the second single (more on their Pye debut shortly). Both sides of this killer were produced by Kenny Lynch, a performer in his own right and loosely associated with The Small Faces early on in their Decca career. The band were all under the age of 18 and A-1 mods to the man (boy?). 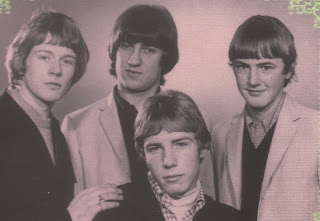 "Gonna Get Me Someone" first blew my mind when it jumped off the grooves at me on Bam Caruso's "The Electric Crayon Set:Rubble Volume Five" LP compilation back in 1987. Easily on par with Carnaby's brilliant "Jump And Dance" it's a pure mod/pop/proto freakbeat raver from start to finish with delicious harmonies, wiggy little distorted solo et al.. I liked it so much I managed to once cajole my band mates in The Tea Club(who with my leaving became the serious musicians they always were and changed their name to The Insomniacs) to cover it in 1988. I can't recall if we ever played it live but we did record a version of it once. No bother, it's a classic. The flip, "Gotta Wait" is equally worthy, starting off with a clanging power chord-on-the -verge-of-feeding back intro(a Game trademark!) accented by some very nice Who-ish high noted backing vocals and some thundering drums.
Both sides are on the highly recommended Game CD/LP anthology "It's Shocking What They Call Us" AND "The Electric Crayon Set:Rubble Volume Five" which also forms a part of the essential "Rubble Volumes 1-10" CD box set. "Gotta Wait" also appears on Decca/Deram's "The Beat scene" Cd compilation.
"Gonna Get Me Someone":
http://www.youtube.com/watch?v=u76LrSamOas