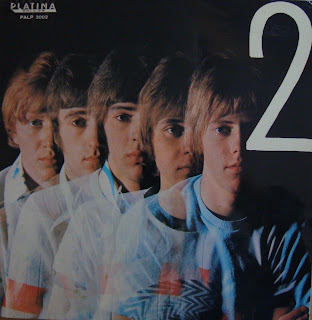 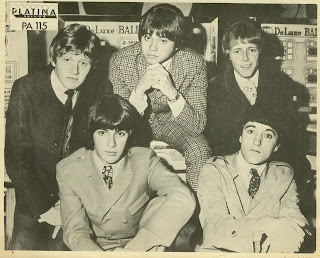 Sweden's Tages are one of my favorite 60's bands of all time. I was introduced to them on a cassette tape from the legendary Ron Rimsite with their monster mod/rave up opus "The Man You'll Be Looking For". My first "cool" girlfriend played me a Swedish 2 LP compilation of their stuff, which I dug so much she passed on to me and through fellow 60's Euro aficionado Keith Patterson I was introduced to the rest of their material. In the space of their relatively short career (1964-1968) they encompassed a variety of styles/genres(all British inspired):beat music, r&b/freakbeat, "mod"/power pop, "Rubber Soul/Revolver" style pop, West Coast inspired pop and full blown psychedelic pop. Their 2nd LP falls in between their their mod/power pop phase and begins their flirtation with those two classic '66 Fab Four LP's. Like nearly all of the Swedish 60's pop groups all of The Tages material was sung in perfect English, so no language barrier for us Yanks!

"Tages 2" was launched in July 1966. By then the band had embraced their new "mod" image as evidenced by their near shoulder length hair vanishing in favor of center partings and bouffants and their British op-art gear like lead singer Tommy Bloom's Keith Moon style t-shirt seen on the front cover (he's second from the right). Also in keeping with their new mod image the album contained a variety of soul covers, most of which were sadly lifeless. This is no better exemplified than by the LP's opener, a cover of Martha and The Vandella's "Dancing in The Street" is lifeless. It is followed by a band original "I Still Remember", a somber/moody little ballad with some cool jangly arpeggios. "Guess Who", another group original, is mod/power pop/pop art Tages at their best. From it's thundering drum intro to a cacophony of feedback, distortion, slashing guitar and the Nicky Hopkin's style piano tinkling during the rave up it's brilliant pure Who via Gothenberg! An ill advised cover of Lee Dorsey's "Get Out Of my Life Woman" is next, not as soulless as the LP's other efforts thanks to some cool piano and a cheezy organ riff (not to mention some raw playing) but vocally it's still lacking. Next up is a total mod '66 punky cover of Johnny Kidd and the Pirates June 1964 single "Jealous Girl" amphetamine sped up and rocked out complete with a resonating main guitar riff, choppy rhythm chords and thrashing drums. Side A is closed out by another band original "In My Dreams", a folky piece akin the The Searchers more folky sides with acoustic guitars, bongos and some Medieval sounding woodwinds that are straight off of an 1966/1967 Donovan album. Side B is kicked off with "Crazy Bout My Baby" (incidentally their first single in England Columbia DB 8019) a tune that was once best described to me by someone "flamenco on speed", complete with a wiggy little skating rink organ solo! The soulless soul continues with an inept version of James Brown's "I Got You( I Feel Good)". Lucky this is quickly rectified by the next tracks. The next is a passable band original called "Dirty Mind" that has a country feel akin to The Fab Four covering Buck Owens with a bit of harmonica and a blistering twangy Merseybeat style guitar solo. "Those Rumors" is next, another Tages exclusive with a thumping beat not at all dissimilar to '66 pre-psychedelic Hollies and the band's trademark harmonies. Their version of "Leaving Here", like the Johnny Kidd cover is hepped up and no doubt came from hearing The Who cover it (The Tages had played with The Who on stage and TV shows in Sweden where The Who were extremely popular in '65-'67). It's not bad, delivered at double time and driven by a piano and with some thundering drums. "Go" is the closer, a two minute long band original that's sparse and is my fave track on the LP. It contains just bass, an acoustic guitar, vocals, bongos and some tastefully baroque harpsichord (with a harpsichord vs. acoustic guitar solo that I swear sounds like the melody of "The Prisoner" theme at times, impossible as the show did not air until a year later!). It's lyrics concern a loose girl who has broken a string of hearts causing the gentleman community to decide "we don't want to be toys in the game you play, so just listen what I have to say, we have bought you a ticket to Siberia and that's where we want you to stay". The main chorus features the "Rubber Soul" like harpsichord tinkling and the main chorus "we don't want you around us no more".

The LP has not been reissued on CD but it's tracks did turn up a number of years ago on a 29 track EMI CD compilation of their '66 material called "In My Dreams" (featuring a photo of the band in some mod and semi-hideous Swingin' London op art clobber). Though out of print it's still floating around at a decent price and is highly worth the investment.

Though I normally can't stand any version of "Get Out Of My Life Woman" , I think the Tages' is incredible!

The fuzz guitar and organ along with the reverbed piano are genius. Surprised the drums at the end haven't been sampled by some douchebag DJ- whoops I just gave it away! I also love the totally laconic vocal. I think you crazy Billy boy!