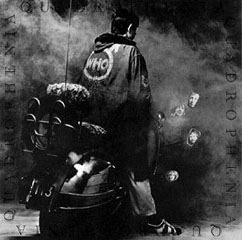 "Quadrophenia".  It's a word or phrase guaranteed to spark an intercine (or is it "inter-scene"?) war among a group of mods at it's very mention. There are of course, two "Quadrophenia"'s, the original 1973 double LP by The Who and the dreadful but easily lampoon-able 1979 film (released 32 years ago today actually).  We are here today to talk about the album.  For me it has been an up and down relationship.  The double album and I are like an old married couple who have the stereotype love/hate relationship but like it or not it is still, thanks to it's beginnings, a very large part of me.

I was first introduced to the album's tracks via the film soundtrack double LP in 1981 when I purchased a cut out of it.  It was not until the summer of 1982 that a friend and I took a copy out of the library in his town to listen to that I finally became acquainted with it in it's original form. I think what struck me immediately was the songs content.  As much as I loved The Jam they never SANG about mods (lucky for them!) and the '79 bands did but in a more subtle way and here it was The Who singing about beach fights, suits, pills and yes the hallowed mode of mod transport, the scooter (a Vespa GS scooter to be exact).  Townshend's lyrical imagery is still to this day as powerful as it was when I heard some of these tracks  that summer day in my friend's stepfather's parsonage study.  "The Real Me" (which opens the album after the quasi-psychedelic "I Am The Sea") still packs a massive "ooomphhh" thanks to the sheer power of the number.  Bassist John Entwistle's impeccable brass work carries the album and it's no better exemplified on "The Real Me".  In fact most of the tracks still have a certain punch to them, like "5:15", "Cut My Hair", "Is It in My Head?" ,"The Dirty Jobs", "Bell Boy" and even the synth laden instrumental "Quadrophenia" all still sparkle for me in their own little way. Though I disdain the "Quadrophenia" film for what it has become and what it spawns (moronic impressions of mod, that dreadful "we are the mods" chant etc) I must say that "I Am The Sea"/"The Real Me" is a perfect way to begin any film and the shots of Phil Daniels riding his Lambretta around (past loads of late 70's vehicles) cannot be ignored.

I think my disdain for "Quadrophenia" occurred as part of my backlash in the mid 90's that resulted when NYC was suddenly inundated by these scruffy Brit pop type mods who I derisively referred to as "yob mods" because of their faux football terrace behavior, their lack of style and their literal belief that Blur's "Boys And Girls" was how life should be, in that order. Thanks to Blur et al there was this sudden influx of "new mods" who were taking the film quite literally and on about beating up "rockers" and basically carrying on like a bunch of primates. The film and all the tribal crap espoused by it was being taken as gospel and suddenly it was a guide on how to behave in the way that Richard Barne's "Mods" book had been for me in '81. This was, in some small part due to the British music papers and that dreadful "Touched By The Hand Of Mod" piece that espoused Blur, Mantaray, Thurman and loads of bands (real and "bedroom") that were never heard of again where it was all "speed, scooter, Quadrophenia". With this there was also a sudden praise for the LP by these "ace face's in trainers" and my head began to turn by unfortunately associating it with them. It put me off on the album for very long time. I seem to recall many, many years ago flogging it on some online mods forum while all this was happening as being the result of what would've occurred if "E.L.P. made an album about mod".  This was of course at a time where I'm assuming I was not amused by it's banks and layers of synthesizers and was not at all interested in 70's music outside of Bowie and Bolan! Fool.


Luckily time erased both the Brit pop mods who moved onto their next "cool" thing and my distaste for the album, which thanks to occasional doses of iPod nostalgia has come back into my world. It's funny but on the occasion that I get to get out and about and meet one of my friends from "the old days" (the 80's) I'm immediately always jarred into remembering, quite fondly, a rather appropriate line from "Bell Boy":

"but I see a face coming through the haze, I remember him from those crazy days..."

Then there's this delightful blog with some groovy factoids about the film:

Amazon.com recently began taking advance orders for the November, 14, 2011 deluxe edition, titled "Quadrophenia:The Director's Cut Box Set" which in the style of David Bowie's "Station To Station" box set looks like quite a treat! It is set to include 4 CD's (including two discs exclusively of demo's), a 7" 45 of "5:15" b/w "Water", a 100 page hardbound book, collectible" insert cards and a DVD all housed in a groovy LP sized, album cover facsimile box!  I think I'll be pre-ordering mine....

Email ThisBlogThis!Share to TwitterShare to FacebookShare to Pinterest
Labels: Quadrophenia

I just picked up a CD of this album from a local music store that went out of business,after reading about it in Ritchie Unterberger's Won't Get Fooled Again (I did have the original album back in the day). I'll be listening w/fresh ears.

Do you think it could have been better if it was done by the Who Sell Out-era version?

Finally, I thought Oasis was the "yob" band & Blur was the "arty" band, or did those kids get it wrong?

So glad you wrote about this!

For me, the original double LP has aged extremely well, unlike the film. These days, the film is still just so worshipped by the 'yob mods' (love it!) and the older guys who, I think, have re-discovered the Mod thing.

And I'm not going to lie… as a kid I WORE that video out. I saw it almost every day after school. Then, I saw it about 10 years later at a theater revival and was just so non-plussed by the whole thing. By this point in my life, I had moved on from 'Mods vs. Rockers' and was more into the essence of Mod style.

There's a book out about Quadrophenia (a Quadropedia, if you will) but I never bothered to get it. Saw it listed in an issue of Ugly Things a few years back.

Diskojoe, well there was Blur's attempt to become "working class" on "Parklife" with their sudden interest in dog races and knee's up's etc, so they were posuer yobs, unlike Oasis who are, for all intents and purposes bona fide Northern White Trash...

What amazes me about the original LP is that Pete would undertake such a project at the peak of their popularity in America. I'm sure very few of their US fans knew what mods really were. Although listeners could get a lot out of the lyrics dealing with alienation and the feelings any teenager or young adult may be going through. It also is strange that the LP did not spur a mod revival in the UK. I guess people weren't ready for one yet. The occasional overuse of synthesizers bugs me but the LP has held up as my favorite of their albums that came after Sell Out.

I can't dislike the movie just because some people like it for the wrong reasons. I think it was a very well done film and it explores well the feelings of fitting in with a group vs. being an individual, blah blah blah (we've all discussed it enough before). Plus the personal meaning it has for me because I went and saw it as a dorky Who fan on its initial run and it pretty much changed my life. I'm not ashamed to admit that it was my introduction to mods and that I completely obsessed on mod culture after seeing it. It's still in my top favorite films and I can watch it and enjoy it anytime! I say don't let others wreck the film for you just because they were "mod"-for-a-day after seeing it.

Yes, the Battling Gallager Brothers certainly do look rather yobby.

Back to Quadrophenia, one of the things I read in Won't Get Fooled again is that all the ambient noise (the sea)that you hear on the album was actually recorded by Pete. Also, that BBC news report report that you hear on one song was specially recreated & actually broadcast by the Beeb (Pete recorded it from a car radio).

Finally, the Who's Quadrophenia tour was rather problematic, including many problems involving the backing tapes, being sent to jail in Montreal for destroying a hotel room & having a fan come onstage to drum in San Franciso when Moonie collasped from too many drugs.

It's true, I've seen a pic of Pete in a mac and poachers hat (with his dad Cliff in tow) with a rel to reel and boom mike recording "the sea" in one of my many Who books.

I guess everyone has a differing account of how Quadrophenia has affected their lives, for me it was seeing the movie at age 14 after sitting through "Black & Blue" (yes the Black Sabbath/Blue Oyster Cult film) at the midnight show. In a near empty theater at 1:30 in the morning it was life changing. The movie was what put me on this road and first directed me to the soundtrack and eventually the entire Who back catalog.
Inspired, I was relentless in discovering the music and fashion from that era and could really give a shit about trainpotting the flaws in the film, as a matter of fact the movies flaws probably helped me not worry so much about not looking bespoke at age 15.

30 years later I just returned from a MOD Weekender in Brighton that was brilliant! Not only did I see the places I had been mindful of for years (and doing it with my lovely wife of 10 years) but I'll admit that the music of Quadrophenia was in my head for that entire weekend.

We saw the re-release of the film that weekend as well at the Brighton Racecourse in anticipation of the re-release, a directors cut that was filled with scenes I had never seen before and was the best print and redone soundtrack hands down. The movie was still inspired, funny and moving for me at age 45.

In regards to the book Carlos, Chasing the Wind the Quadrophenia Anthology is a great read and a must have if you are a fan of the film. Alot of great insite and locations which helped us navigate to Steph's Alley and beyond.

Finally in response to the "yob mods"of the 90's sorry your experience with the britpop kids was awful, but they weren't really mods at all, were they?

There is a great documentary Amazing Journey : The Story of the Who where Quadrophenia is explained and analyzed. Its really great ..and its streaming on Netflix

Also listen to a hysterically funny episode of the Eddie Piller Modcast feat. actors from Quadrophenia

Loving the movie and the music...
I see a man without a problem.