Without a doubt nearly all of The Zombies 60's single tracks are amazing. I can honestly say that unlike The Beatles or The Hollies there are no equivalents to the mundane boredom of "Love Me Do" or lame American covers like "Stay" or "Searchin'" in the Zombies U.K. A-side discography. Picking a favorite Zombies number is really a tough call, but today's A side item rates as one of my faves ever since I first heard it in a "new light" on the "Time Of The Zombies" Epic U.S. double LP in 1986 (I owned it on 45 for over a decade and never really dug it!).

September 1965's "She's Coming Home" (the band's fourth U.K. single and third American one) has all the makings of your typical Zombies "teen angst" number: the tragic protagonist, his long lost (but soon to be returning love) and this somber minor chords tastefully accented by Rod Argent's piano and organ (whilst Colin Blunstone soulfully croons).  Ken Jone's production is, as always, top notch and crystal clear.  On the flip we have "I Must Move", a number that easily could have made an A-side.  Starting out with Paul Atkinson's echo drenched acoustic guitar it's one of the St. Alban's boy's greatest triumphs in my book.  The harmonies and melody are precision pop at it's finest.

Both sides can be found on a multitude of products, I personally recommend Big Beat's CD "The Singles Collection" which collects all their Decca AND CBS British 45 rpm tracks, in Mono! 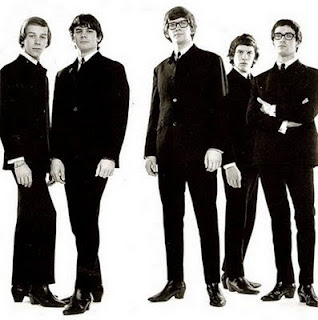 I second your recommendation of that Zombies Big Beat comp. It always seems to find my way in my car for those Saturday drives.

That's such a perfect single! "She's Coming Home" is one of my all time favs.