Polydor In The 60's: Home of the Cool-Part Two 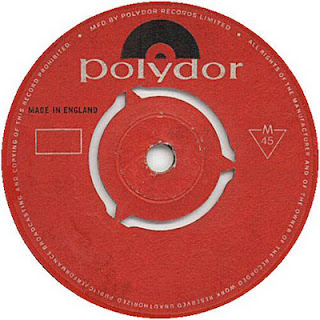 1. THE SOFT MACHINE-"Love Makes Sweet Music" Polydor BM 56151 1967
Like the Jack Bruce number mentioned in the previous posting, this track came to me via a dodgy Polydor LP compilation called "Rare Tracks".  It blew me away so much that I snapped up a copy of the single as soon as I saw it on the wall at Rockit Scientist in NYC. Forget any preconceptions of tedious jazzy prog jams you may associate with the Soft's as this 45 will knock you on the ear with it's cheery Blues Magoos style pop.  Oddly I do not think it has ever been legally reissued anywhere yet.  More crimes.

2. THE GODS (Thor-Hermes-Olympus-Mars)-"Garage Man" Polydor 56158 1967
Found on the flip side of the frantic/bluesy style rework of the "Come On Down To My Boat Baby" this pre Ken Hensley/Uriah Heep 45 features the lead guitar talents of a young Mick Taylor shortly before being snapped up for finishing school in John Mayall's Bluesbreakers. Taylor plays some very Bluesbreakers like runs while the lead singer tells the tale of woe of purchasing a lemon from"the garage man" with some nifty combo organ filling in the background.

Hear it on:
"Echoes From The Wilderness"


3. THE CREATION-"How Does It Feel To Feel" Polydor 56230 1968
Too much has been written on these guys everywhere so I'll suffice to say I was never a fan of a lot of their post Planet material, but this monster is an exception.  Musically it bears no resemblance to the hippie jams that were going around in '68 when this dark 45 hit the streets and Eddie Phillips guitar pyrotechnics and Jack Jone's ominous beat paint the bleakest, meanest tale ever sang about the dark.

Hear it on:
"Our Music Is Red With Purple Flashes"

4. NICKY HOPKINS and THE WHISTLING PIANO-"Mr. Pleasant" Polydor 56175 1967
Yet another "Rare tracks" entry, ace piano session man Nicky Hopkins takes the Kinks cheeky track and adds a bit of knees up to it with his bar room piano treatment with a chorus of slightly off key whistling (ala Whistling Jack Smith).  Unreissued of course!

5. THE SLENDER PLENTY-"Silver Tree Top School For Boys" Polydor 56189 1967
We've discussed this '66 Bowie track elsewhere here numerous times and it was also cut by the Beatstalkers but this is my fave.  It's droning fuzz guitar is faithful to Bowie's original demo while the lyrics campily portray dope smoking at a posh public school (ripped from the headlines after Bowie read of a pot smoking scandal at Lancing College).

6. THE LION TAMERS-"Light" Polydor 56283 1968
Flipside of a track called "Speak Your Mind", "Light" first came to light thanks to Bam Caruso on the "Rubble Volume 17:A Trip In The Painted World" LP (the only LP volume I missed out on actually, so I had to wait a good twenty years to hear it on CD on the box set). It's whimsical without being too twee with a slight hint of trippiness!

Hear it on:
"Rubble Volume 17:A Trip In The Painted World"

7. THE PEEP SHOW "Mazy" Polydor 56196 1967
These cats were a short lived U.K. psych group managed by none other than one time ace face and High Numbers svengali Peter Meaden. You can read more about the band and Meaden's involvement over here at Kevin Pearce's excellent down loadable blog:

"Mazy", the flipside of the somber "Your Servant Stephen", is a trippy number full of jangling reverberations, hippy Indian flutes, cascading psychedelic effects that rate it as one of the classic British 60's lysergic monsters!

Hear it on:
"Rubble Volume 13: Freakbeat Fantoms" and on "Mazy:The Secret World Of The Peep Show" a Peep Show CD compilation (also available for download from iTunes)


8. STU BROWN & BLUESLOGY-"Just A Little Bit" Polydor 56195 1967
Another inclusion on the old Polydor "Rare Tracks" LP was the final single by Bluesology featuring Reggie "Elton John" Dwight pounding the ivories. Most of you might know this track from the freakbeat version by The Act, which was actually cut almost a year later.  This version is more r&b with some brilliant horns and barrel house piano work trotting along with the driving drum beat.  Again, there's been no sign of any reissue action.


9. JOHNNY GUSTAFSON-"Just To Be With You" Polydor MB 56022 1965
This was the debut solo single by ex-Merseybeat bassist Johnny Gustafson, who left The Merseybeats when Billy Kinsley returned to claim his spot.  Johnny Gus always had the pipes and this soulful outing is a perfect example of that!

Hear it on:
A now out of print German Mersey's CD "A and B Sides, Rarities".

These Brummies chose to cover an obscure non-hit from The Kingsmen (which did not see a U.K. issue), replacing it's near "Louie Louie" meets "Chain Gang" licks with something a bit meatier and far more punchy with some snotty Jagger-esque vocals.  It's been on two different "Electric Sugarcube Flashbacks" LP's  but hasn't, to my knowledge, popped up on any CD reissues or legit comps.