1. DR. FEELGOOD-"All Through The City"
My pal John Jorgensen loaned me the Feelgood's documentary "Oil City Confidential"and I immediately busted out and dusted off "Down By The Jetty". This one is one of my faves on it, a great end of the night/coming home with the milkman" tune, something I haven't done in a long, long time!

2.BLUR-"There's No Other Way"
Twenty years ago I was living just two scant miles away from Anorak Manor here and playing the crap out of this CD, and believe it or not 20 years on it still sounds pretty good as I wind down the same lanes I did as a much, much younger and thinner man. From when they wore baggy pants and went through the silly period where they trooped down to the Merc and decided they were mods, silly art school twits.

3. JOHNNY KIDD & THE PIRATES-"I Can Tell"
"Oil City Confidential"sent me also scurrying to revisit Johnny Kidd and company.  There are at least half a dozen U.K. 60's covers of this number that I'm aware of and this has always been my fave thanks to Johnny's voice and Mick Green's brilliant chops on the six string. 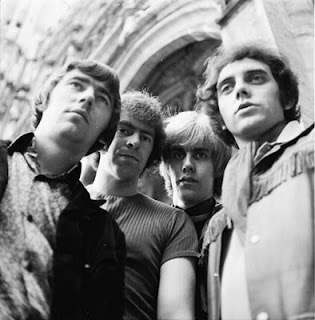 4. THE MIKE STUART SPAN-"Children Of Tomorrow"
Bleak, heavy guitar stuff.  These guys are always touted as psychedelic heroes but I see more of a parallel with the equally mislabeled Open Mind or a less wanky Eire Apparent. Regardless this is very powerful stuff.....

5. DUSTY SPRINGFIELD-"Goin'Back"
Mighty stuff this, hands down my fave version of this tune ever.  The strings and horns make the hairs stand up on the back of my neck every time!! It never fails to make me stop what I'm doing and wait for the crescendo in the middle where it all kicks in much like the bit on "A Day In The Life".

6. THE BUNCH-"Spare A Shilling"
Quirky spot of U.K. mid 60's psych pop unearthed care of the "We Can Fly"series, it's well produced, catchy and bears little resemblance to their previous 45 (see http://anorakthing.blogspot.com/2008/10/bunch-more-60s-brit-mod-r.html )
where they sounded like a more mod version of The Animals '66.  The horns and organ are still there but there's a touch of "fairy dust" to it and an all around jaunty "feel good" bit to it.....

7. OLIVER NELSON-"Sound Pieces For Jazz Orchestra"
One of the benefits of having a used jazz CD section at my local record shop means I can always walk out with three or four classic 60's jazz discs for under $20.  This CD "Sound Pieces" on Impulse, was a recent catch.  It's sort of all over the place but this particular number a brilliant little piece from '66 that seems to anticipate David Axelrod.

8.JACQUES DUTRONC-"Comment elles dorment"
Boozy, almost country western crooner from Jacques second LP from 1968 (his first three LP's were all untitled) where he sings rather laconically. Like nearly all of his tunes I haven't a f*cking clue what he's on about but he's got a great voice and the music and production are great!

9. THE KINKS-"Do You Remember Walter"
This one is utterly timeless because the older I get and the more lost people get in the shuffle of life the more of an impact this number seems to have on me on days where I'm reflecting on those who I've become disconnected with.

10. THE RICH KIDS-"Ghosts Of Princes In Towers"
Punchy punky power pop care of Glen Matlock and Midge Ure, a million miles away from Glen's previous band's New York Dolls wall of noise guitar style and nowhere near the bleak synth angst of Midge's next big job.

You got some great songs there, especially Dusty's version of "Going Back" (I also like the Byrds' version) and "Do You Remember Walter", another great song from the VGPS album.