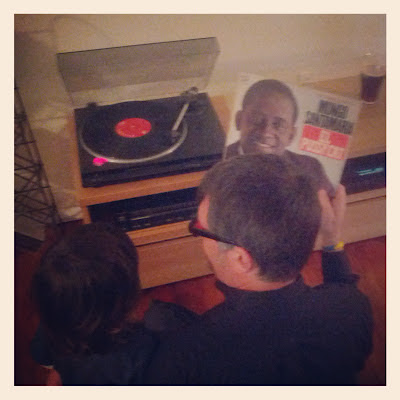 This month I decided to take a break and hand things over to my two and a half year old daughter for this month's music picks.  I've never been a parent who wants to inundate their child with their own personal tastes but I haven't strayed from playing music around my little wonder either. She loves to dance and will start doing so whenever she hears something she likes. These wound up being her favorites over the past two years, with no coercion or suggestions from me or the Mrs. (well she heard "Click Click" by some mediocre band in "Shrek 4" and I decided she needed to hear the original....and she couldn't tell the difference and bursts into spontaneous fits of dance when she hears it on my iPod):

1. THE SCAFFOLD-"Thank U Very Much"
When she was not even two yet this cheeky track inspired giddiness and still does.

2. THE SCAFFOLD-"1,2,3"
Scaffold tracks seem to be child friendly, maybe because they're simple and this one of course has counting, which she likes to do often!

3. OLA & THE JANGLERS-"Alex Is The Man"
My daughter cottoned to this because of the way one of the band members says "George" in a flat out Liverpudlian accent that I've often used when referring to one of her stuffed monkeys who just happens to be named George.

4. THE BEE GEES-"Harry Braff"
Around our house we sing an altered version to the cat.

5. THE ZOMBIES-"A Rose For Emily"
Aka "The Emily Song", another cat inspired tune.  I used to feel odd that a two + year old was walking around singing "Emily can't you see" from a tune about an old spinster who dies alone, but we'll laugh at the irony when she reads Faulkner in high school.

6. USHA UTHUP & CHORUS-"One Two Cha Cha Cha"
C/o one of my treasured "In Flight Entertainment" CD's this became an instant "like" and a frequent request on YouTube.

7. HEPCAT-"Pick It Up"
Thanks to "Yo Gabba Gabba" this, along with "Don't Bite Your Friends", is a frequent "request".  There's something charming about a two year old chanting "pick it up pick it up pick it up" in Ranking Roger toasting style!  And here's the video:

9. MONGO SANTAMARIA-"El Pussycat"
A fave, though possibly only because of the cat meows that punctuate it, but there's always some head bopping and shoulder rolling to go along with it when she hears it!

10. YO GABBA GABBA-"Don't Bite Your Friends"
We had a bit of biting going on at school awhile back, this helped set it right and became a fave, but not mine.

Pretty nifty taste for a 2 1/2 yr. old, I must say. My niece & I sing Sunny Afternoon & Yellow Submarine to my 1 yr. old grandnephew on occasion. Do I get the feeling that Raffi is not allowed in Chez Anorak Thing?

Dude, one of the best music posts I've ever read. Not just for the music, but for the reasons and storied behind WHY these songs were chosen.