Hello, hello, it's good to be back it's good to be back...or so the creepy man in spangled lurex sang. It's been awhile. My stock of ready to publish blog entries have dwindled and I've been too busy working for the man to punch out any new ones. Lately I've been Kinks mad having finally scored all but one of the deluxe double CD editions of all of the 60's LP's (I still need the "Arthur" one). I'm also rapidly approaching the point where I'm running out of records to write about as I have this rather anal tendency to only want to usually pen about 45's I've actually owned, usually without resorting to stealing (ie using/borrowing) scans from other people because I couldn't be bothered to scan the labels of the 500+ 60's 45's I divested myself of.

With that in mind today's topic is a German pressing (with a decidedly dated looking '65 Kinks on the sleeve) of a Kinks track that sadly never got an A-side release in the U.K.: "Dandy" (it was found in the U.K. on their "Face To Face" LP along with it's flip side "Party Line"), where it went to the #1 slot in late 1966. I first became aware of the track as a 10 year old on a cousin's yard sale score of their "A Kind Of Hush" U.S. LP before I even knew who Ray Davies or The Kinks were. To me the track seems to somehow epitomise the somewhat stereotypical lad about town in Swinging London (no doubt fueled by too many viewings of "Alfie" or even any host of U.K. film characters from "The Knack And How To Get It", "Blow Up" "The System" or even Micheal York's "Tom Swift" in "Smashing Time"). For a time many, many, many years ago, I somehow felt this was a personal anthem of sorts as I flitted around doing things with a rather gauche but gentlemanly manner. I often think that Ray wrote this about brother Dave who was being Jack The Lad while he was stuck in his prefab with a wife, a baby and one more on the way.  It was not released, as we mentioned, on a U.K. single but it was an A-side in Germany, Belgium, Sweden and Holland, to name but a few. 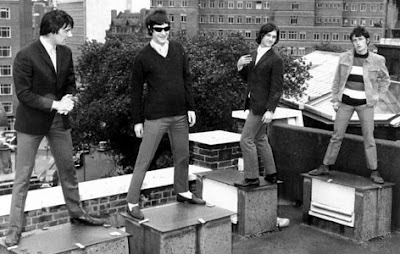 As we've mentioned in earlier posts "Dandy" was recorded by a host of other artists which you can have a peek at here:

The Kink's version, in my book is the superior version. Ray's vocals are almost ambivalent, with an almost jealous -but-couldn't-care-less attitude to them as he writes and sings in one of his best modes: social observation. Pete Quaife's bass and Nicky Hopkin's slight piano chords rock it out in an almost "Sunny Afternoon" style descending chord progression and it ends with Ray (finally) singing with a sad bit of jealous resignation "and Dandy, you're alright...".

"Party Line" harks the end of the old raving Kinks ala "Come On Now" or "It's Alright" at a time when things were becoming increasingly more quaint, introspective and whimsical. Kicking off with a phone ringing and manager Greenville Collin's posh clipped quip "Hello who's that speaking please?" it's a proper bash up, as one man said. It's still fun though and Dave's voice is always perfect for these sort of numbers. To be truthful as much as I like the "raving" Kinks I think the '66-'69 "quintessential Kinks" (as I like to term them in that period) are my fave because they created something different and carved out their own niche, whereas the earlier stuff seemed akin to say The Troggs or The Sorrows.  But the number works as they bash their way through and Dave plays some very melodic bits underneath it all. 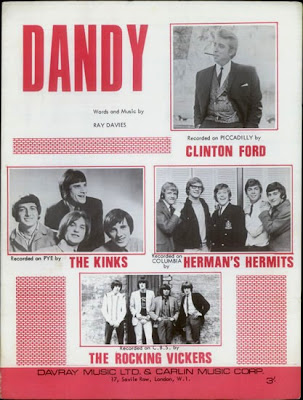 Both tracks are of course on their brilliant fourth LP "Face To Face".

Nice to have you back & with a rather gincy Kinks entry.

I always thought that Arthur was the best-sounding Kinks album.

Finally, here's a little something that will be coming out this summer: