Well I don't know if I buy that, but it sounds good right?! That's what was alleged to appear dabbed on walls in London in '66 when Eric Clapton was John Mayall and the Bluesbreakers new guitar slinger having fully joined in April 1965. this single was originally issued in the U.K. as Immediate IM 012 in October 22, 1965 crediting "John Mayall and The Bluesbreakers (and later relaunched again by Immediate in September 1967 as IM 051 crediting "John Mayall and The Bluesbreakers featuring Eric Clapton" as did today's postings  American pressing) .  It was John Mayall's third 45 and "God's" first with Mayall and Co. The session for both sides was produced by Jimmy Page, who at the time was doing quite a bit of dial twiddling for Andrew Loog Oldham's new label (among them 45's by Nico, The Fifth Avenue etc).

The line up at the time was the same as the famous "Bluesbreakers With Eric Clapton" ( U.K. Decca  LK 4804 July 22 1966 and U.S. London LL 3492 mono and PS 492 stereo 1967) album: Mayall (vocals, harp, keyboards), Clapton on guitar, John McVie (bass) and Hughie Flint (drums). It also marks not only the vinyl debut of Eric Clapton with the band but Mayall's new Hammond organ as well. 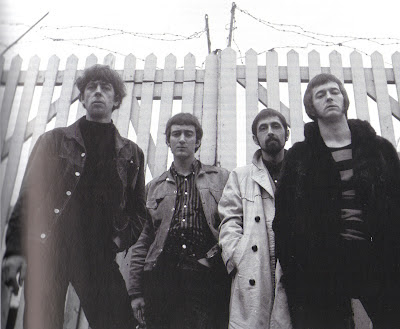 "I'm Your Witch Doctor" is classic Bluesbreakers, from Mayall's Hammond intro note segueing into Clapton's blistering guitar licks to Mayall's bluesy lead vocals.  The jazzy swing is undercut by the blues based guitar licks and it all works very well indeed thanks to the nifty little stops and Mayall vocalising along with his organ trills. For me it marks the end of the band's classic British r&b "Flamingo jazz" style before they became an all out "blues rock" group.

"Telephone Blues" is not as swinging in my book. It's sadly traipsing into the B.B. King turf that quite honestly bores me when it's being recycled by a batch of British blues devotees.

Both sides are available on a variety of places since Immediate stuff has been reissued very heavily, more often than not illegally. If you're concerned with legit products there's the double CD "Immediate Pleasure" of various tracks for the label that contains the A-side