The Old Mods Long Awaited Story: The Action "In The Lap Of The Mods" Reviewed 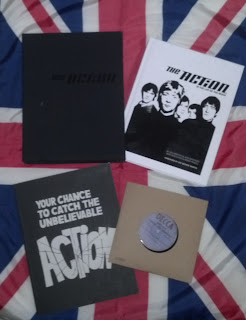 I've been long excited about The Action's "In The Lap Of The Mods" book like it was the second coming.  The Action, along with The Small Faces, The Kinks and David Bowie are my favorite 60's artists.  From their first single as The Boys all the way down to the material cut before they became Mighty Baby (released in the 80's on a mini LP "Speak Louder Than") and even lead singer Reg King's 1971 solo LP I'm all on board as a one man American cheering section. I'm still, 18 years later, slowly wrapping my head around Mighty Baby.

Authored by original 60's Action fans (the late)  Ian Hebditch and his partner Jane Shepherd, it's a solid pleasure from cover to cover. They have done the unimaginable. It is without a doubt the best book I have ever read on a band (coming in just ahead of "Any Day Now: David Bowie The London Years 1947-1974").  No fact or anecdote is left behind.  With input/quotes from all band members, their associates, fans and friends (with a forewords by Sir George Martin who produced all 5 of their Parlophone singles and uber Action fan Phil Collins) there's no shortage of facts or information lacking here at all.

I sprung for the deluxe edition that came in a  slip cover/box with a extra magazine sized book titled "Where The Action Is: Your Chance To Catch The Unbelievable Action" (a day by day account of their gig/recording and TV appearance history chock full of news clippings and 45 label/sleeve scans) and a facsimile one sided acetate of their 1965 Decca audition disc, a cover of The Temptations "Girl (Why You Wanna Make Me Blue)". 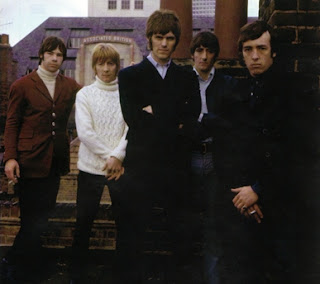 I learned a lot about the band's history in reading it, if you're an Action freak like me you might find these little facts interesting:

*Lead guitarist Pete Watson played on the band's first single as "The Boys" and was in the band for most of their career. Previous reports had him joining shortly before they became The Action.

*The Boys, NOT The Action, supported The Who during their Tuesday night Marquee Club residency in 1965 and were eventually removed from the bill at the request of Who managers Chris Stamp and Kit Lambert because they felt they were "upstaging" The Who.

*The Action gigged with David Bowie and The Buzz, The Syn, The Alan Bown Set, Bluesology, The Syn, The Byrds, The Attack, The Pretty Things, Dantalion's Chariot, The James Mean, The Mike Stuart Span, Timebox,  etc to name but a few!

* For their July 1966 "Ready Steady Go!" appearance  to promote "Baby You Got It" bassist Mike Evans and and drummer Roger Powell were tripping on L.S.D.

*A month after Reggie King left the band they recorded the five tracks released as "Speak Louder Than".

*The band only used the name "Azoth" for a week, switching back to the Action and then, eventually, Mighty Baby.

*The very last gig under The Action moniker was December 27, 1968 at the Oasis Club in Portsmouth.

* Our fave scribe here was the catalyst in the chain of events that led to the band's brief reformation in the late 90's.

I think one of my favorite parts of the book are the in depth looks at the 60's U.K. mod scene (with a particular perspective on the Birdcage, a club in Portsmouth where the band had a hard core mod following).  I especially enjoyed reading various perspectives from original 60's mods who's opinions are both varied and very strong on a variety of subjects included within.  For instance there is a great deal of varying opinions on The Small Faces, some feel they were mods, others feel they were "commercial mods".  The Action fall under similar varying opinions as well, to some the were a "band for mods", for others they were "mods in a band".  Regardless all concerned agree on one thing, live onstage, they were a force to be reckoned with. Oddly there was a great deal of belief that their singles did them no justice and that they were "softened" up to have commercial appeal.  Hmmm. To each his or her own I suppose!  There is also a great deal of attention paid to my favorite period where the band began looking towards "West Coast sounds" from late '66 onward till their metamorphosis into Might Baby. This is a period that has received scant notice in my 30+ year quest for Action information and it was fascinating to read about them. And for the completist there is a list of every song ever performed by the band live (both in the 60's and during their "reunion gigs in the late 90's)!

The book (both by itself or in deluxe edition format) can be ordered by going here, I suggest you do so post haste as the printing is limited to 400 copies.

Was nice to get a little mention in the book (and above of course!). When I was approached by Doug Bannon with the idea of getting the Action back together I was dead against it to be honest. Really thought some members weren't up to it and it would spoil their story.

Took me a while but I did come to change that opinion and appreciate things like friendship and shared experiences are worth far more. Now they're not all here that is brought home even more. Love them.

Cheers Monkey. I think it's fitting that you and I can both enjoy this book as 20 years ago we were both championing their cause (pre-Internet)from both sides of the ocean in our respective fanzines and scouring for old clippings, photos and bits of info when no one else was.

I'll drink to that. Cheers pal.

Looks like I need to place an order pronto!