Breaking Up Is Hard To Do: The Jam 30 Years Gone 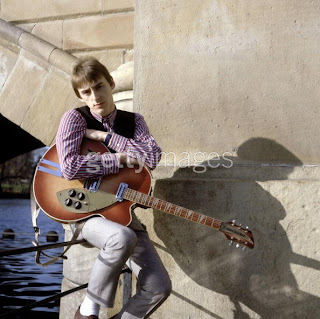 I still can remember it like it was yesterday, 16 year old on a cold boring Friday night in November (or was it December?)stuck home with fuck all else to do laying on my bed staring at the ceiling with my local college radio station WPRB on and the DJ  remarks that he'd just read that Paul Weller announced that The Jam were splitting up.  I wish I could say I was gutted, but I wasn't.  I worshipped The Jam and in a way I wanted them to go on forever but I was honestly so far up my own ass in teen angst that their existence was almost superficial to me.  In retrospect it marked the last contemporary band I devoutly followed in my life. Maybe I was broken up, I honestly don't know, I was more concerned with the usual shit a 16 year old thinks about: chicks, getting into with their parents, hating school and nearly everybody there.

Looking back the post "Sound Affects" Jam wasn't my favorite period, it wasn't then and it still isn't. Honestly I had more important things to listen to in 1982.  I'd fully absorbed nearly all of the 60's tracks The Who had to offer and was buying Small Faces LP comps with a ridiculous practice of obtaining them for a few tracks I didn't have and 60's Bowie was just around the corner as was The pink Floyd and a more in depth look at The Kinks.  When I play "The Gift" or any of the band's output from 1982 I'm left cold about a lot of it, the horn section in my estimation was the first indication it was going horribly wrong.  Certainly there ARE exceptions, The Kink's-ish "Just Who Is the 5 O'clock Hero?", the moody jazziness of "Shopping" (my fave '82 Jam track) or "Running on The Spot". Bands are never the same when you start adding new members or augmenting existing ones. I recoiled in horror the first time I'd heard "Precious" on a black and purple striped 12" maxi single (now there's an 80's anachronism for you).  It was like Pigbag for god's sake.  And that awful dreadful soprano saxophone.  Augh. Maybe it's best The Jam split because well, god knows they'd have gone to record "Long Hot Summer".  I still have the greatest respect for Weller for just walking away from it all, the only way he could've done it better was if maybe he'd walked up to the beach after their final gig in Brighton and kicked his shoes off on the shingle and walked straight into the ocean leaving a pair of loafers behind as the band's legacy.  Of course I'm being dramatic and symbolic, I'm not honestly suggesting Weller should've topped himself but I think you get what I'm driving at.  When an artist ceases to truly be inspired by what they're doing you become Pete Townshend and play the same tired boring shit for 50 years to the numb and dumb. In a way Weller ensured that wasn't happening.  Think about it, The Beatles and The Jam are perhaps only the two hugely successful bands I enjoy who said 'No!" every time the dreaded "reunion" issue was brought up.  I think that in itself speaks for something.  That said it couldn't have been easy for Messrs. Foxton and Buckler to carry on the show after knowing a pink slip awaited them (as evidenced by the "T.O.T.P." clip below where they look well and truly pissed off as Weller practices his soul-less white boy dance moves looking naked without a Rickenbacker to hang onto).

For the past 30 years there's been that ugly topic of Jam reunions.  I think Paul fobbing off suggestions of a Jam reunion are funny given the fact that he was on "Jimmy Kimmel Live" bashing out "Running On The spot" (the number the Jam opened with at the one and only gig I'd ever seen them do, Trenton War Memorial, May 1982) and peppers his sets with Jam tracks, but since he wrote all of them why the fuck not right?  For the longest time I was the world's biggest From The Jam basher. When they were due to come around I watched some live footage of them with some friends and we decided that for $17 it'd be worth it to check them out even if their lead singer is merely a first rate Paul Weller impersonator.  The tour was scrubbed though.....but I'm glad The Jam never reunited.  Band reunions are always spotty affairs that go go a variety of ways, all too often in a route that's not very positive. And I'm glad The Jam aren't on the list like that travesty out there now called The Zombies or one of those joke bands they never quit like the Rolling Stones.  I do feel for people who weren't old enough to see the real Jam or got into them too late or whatever the case may be but between Weller playing a set that's 10% Jam tunes and From The Jam playing at set that's 90% Jam tunes I think you can get an idea.  The Jam's break up wasn't the end of the world, it was a milestone in a way and a millstone for Paul Weller to shake.  Could The Jam have pulled off most of those early Style Council records? Indeed I'm certain, but I'm glad they didn't because I'll gladly take "Precious" (which I've kind of come to enjoy in bits...if I can blot out that Kenny G sax) any day over "The Money Go Round".

You can read about my Style Council experiences here and here and the most recent Weller gig I caught here.
By Wilthomer - November 04, 2012

Agree with much of that apart from the fact The Gift is probably my favourite Jam LP (Precious an' all).

Saw the 82 tour here in NY, my only Jam show. Yes there was alot of great music to listen to in 82!! Great blog!

Saw them here in NY for 82 tour as well, I got to meet Weller after the show, he was cordial. Yes, plenty of great music in 82: the whole paisley underground movement was in full swing. Great blog!