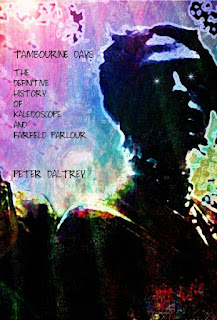 Kaleidoscope, the U.K. variety, have long been one of my favorite British 60's psychedelic bands ever since "A Dream For Julie" and "Flight from Ashiya" first sprang from the grooves of Bam Caruso's "The 49 Minute Technicolor Dream" in 1985. The band amassed 5 singles and two LP's before becoming Fairfield Parlour and releasing two singles (one under the moniker of "I Luv Wight"), one LP and one E.P. Their debut LP "Tangerine Dream" ranks up their with "Piper At The Gates Of Dawn" and Caravan's eponymous debut as one of my favorite U.K. psych albums of all time.  When I discovered that their lead singer Peter Daltrey had penned a book chronicling his career I jumped at it.  Perhaps too quickly.

With that said the band's lead singer (and co author of all of their tunes with guitarist Eddie Pumer) has quite a tale to tell based on the band's career (which began in 1964 as The Sidekicks and then The Key who in turn became Kaleidoscope).  My first complaint is the book is rather slim.  My second is that the photo reproduction quality in several, if not half of the photos is atrocious, as if they'd been plucked (pixelated) from thumbnails on the web. I'm sorry but  $37.17 (actually I just checked my credit card statement and it cost $48.50 with shipping) for a soft covered 6" x 9" book is enough with high quality photos, but with these poor reproductions, well the book would have been better served without them.

Bitching and gripes out of the way (not yet) I liked Daltrey's writing style but feel I'm no closer to learning more about Kaleidoscope than I was before I read an interview with him in a zine 20 years ago (was it "Bucket Full Of Brains"?) where he divulged that all their whimsical psych tracks were composed not on L.S.D., but in the guitarists bedroom after a bit of Chinese and copious amounts of cheap red Spanish plonk! Initially I was blown away but it seems that the period leading from their debut 45 "Flight From Ashiya" to the LP "Faintly Blowing" lasted but a few pages. Fairfield Parlour receive just a bit more space than Kaleidoscope, but then it's downhill for me. In fact at least a quarter of the book is devoted to listing his discography (he has evidently been quite prolific as a solo artist these past 15 years). 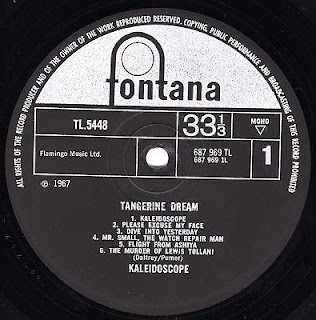 The book's numerous appendixes (including an essay on their day trip to France to mime "Flight From Ashiya" and "Holidaymaker" on TV among them and a touching piece on the funeral of bassist Steve Clark, tragically run down and killed on Chelsea Bridge in 1999) make up for the brevity I guess and there's a few interviews with Daltrey (obviously conducted via e-mail or mail) but I'm left feeling that for my money I really didn't get what I paid for. Maybe I'm still in a state of euphoria after reading the amazingly well put together Action book., maybe I'm just old and grumpy.  Or maybe, I'm just a consumer who when paying a large price for something so small, expects great things from it.
Interested parties can order the book direct like I did from here.
By Wilthomer - December 11, 2012

Soory to hear that the book was a bit of a disappointment, as I also enjoy Kaleidoscope. One of my favorite baragin bin scores was finding a UK CD comp of theirs.

I think that Fairfield Paulour did a second album, a concept album based somewhat on Marilyn Monroe that didn't come out until the
80s I do have another CD comp w/both albums.

Ouch, but the sort of honest review I like. Will stick their albums on now and pass on the book.

Diskojoe, that'd be "White Faced Lady", it wasn't released till 1990. I still swear it sounds like it was recorded in 1990 and not whatever year it was done (early 70's). It was released under the "Kaleidoscope" moniker. I should dig that out! Thanks!