2. PAUL McCARTNEY-"Too Many People"
You can fill what I know of solo Beatles stuff on a 90 minute CD-R.  Cheers to my friend Jennie Wasserman for sticking this in my brain where it's been for the past month and suitable for relief in this crazy world we live in.

3. THE SPENCER DAVIS GROUP-"With His New Face On"
I've only just embraced the 60's S.D.G. Mk.II stuff (of the pop psych vein) and this one really blows my mind and is, in my estimation, far more enjoyable than covers of say, "Looking Back".

4. THE EYES-"Please Don't Cry"
Sometimes owning a lot of 60's stuff you forget the bands that were obscure back in the day but now seem as common as the Small Faces or The Creation.  Add The Eyes to that list.  I always loved this number because in the middle of their pop-art/Who tribute period they still managed to record a perfect beat group number like this in 1966. 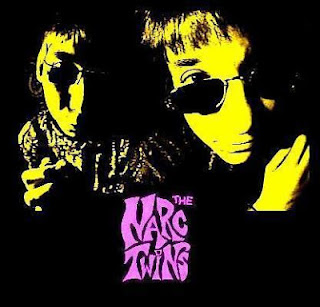 6. THE NARC TWINS-"Old Joe Mushroom"
Local heroes of sorts, in the early 90's these guys (a duo) were a studio only act who released a few cassettes.  To say they were psychedelic is putting it mildly.  The best comparison I can draw is the U.K. act Vibrasonic (before they went "surf") meets The Dukes of Stratosphear, but I think these guys were doing it longer than the former. The cool thing is all of their catalog is available now for free download which you can do here. I suggest you do.

7. THE BUMP-"Winston Built The Bridge"
Mondo obscuro 1969 track from a band from Detroit that sounds more U.K. '67, unearthed  by the good folks about Bam Caruso for Rubble Volume 20 "Thrice Upon A Time (Nothing Is Real)".  Totally lo if but quite good with a heavy dose of phlanging at the end.

8. JOE SWIFT'S INTERNATIONALS-"Bell Bottoms"
God bless the "Mod Jazz" CD series on Kent for bringing obscure little groovers like this to the surface with a driving beat, wonky sax, go-go organ and a bunch of cats yelling contemporary zany shit at each other while the band plays ..."uh she must be goin' down to the Trip A-Go-Go...she got them real hip bell bottoms on" etc. From "Further Adventures Of Mod Jazz".


9. THE JAM-"Running On The Spot"
I hate being "personal" here because this blog is all about music and it's ability to take one away from the world and it's harsh reality but I'm still reeling, seething and in some small way aching from the deaths of so many little innocent children in Connecticut last Friday.  I was running around the track at the gym the other day and this track came on my iPod gym playlist and lyrically it summed up how I feel in regards to all of it: the shooting, humankind, the armchair politicians who want to forward articles on what we should have done or what we should be doing and the naive sad fuckers who actually think their elected officials are going to make some sweeping change. I'm loathe to get up on my pulpit like so many FaceBook politicians but I've spent all of my adult life (from age 18 onwards) in some form of civil service be it the military or working for the federal government and people I'm here to tell you I don't think "the man" has your best interests at heart if big money isn't behind it.


I was hoping we'd make real progress -
But it seems we have lost the power
Any tiny step of advancement
Is like a raindrop falling into the ocean -
We're running on the spot - always have - always will
We're just the next generation of the emotionally crippled.
Though we keep piling up the building blocks
The structure never seems to get any higher
Because we keep kicking out the foundations
And stand useless while our lives fall down.
I believe in life - and I believe in love
But the world in which I live in - keeps trying to prove me wrong.

Intelligence should be our first weapon
And stop reveling in rejection
And follow yourselves, not some ageing drain brain
Who's quite content to go on feeding you garbage
We're running on the spot - always have - always will?
We're just the next generation of the emotionally crippled.

10. THE PEDDLERS-"Tell The World We're Not In"
I picked up on this tune watching the creepy/seedy post Swinging London flick "Goodbye Gemini" and this was the opening title track.  I instantly recognized it as the Peddlers but was at a dead end of tracking the tune down. Luckily my pal Larry Grogan over at Funky 16 Corners came through with an MP3 as it's not on any of their CD comps (which all compile their CBS 45's, this one was on Phillips).  It's like a funky '67 Georgie Fame tune with some groovy organ and an underlying jazzy feel, perfect.  And check out the film it's quite good!