Mick & Keith Got To Jail And The Who Pick Up The Slack.... 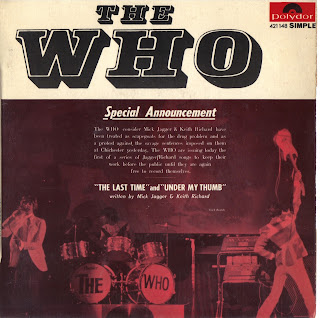 Certainly one of the most well meaning but misguided publicity stunts of the 1960's occurred when Keith Richards and Mick Jagger were sent down for drug related charges from the infamous Redlands bust on June, 28, 1967 and The Who rush recorded and released a 45 of covers of "The Last Time" and "Under My Thumb" as a show of solidarity and as their press release claimed "to keep their work before the public until they are again free to record for themselves again".  It was released on June 30th, luckily for the public The Stones were bailed before it actually hit the streets and we were spared any more half assed Who versions of Stones tracks.  Bassist John Entwistle was away at sea on the QEII on his honeymoon at the time the light bulb lit in manger Kit Lambert's head and he rang him via ship to shore phone asking his permission to have Pete double over on bass.  Entwistle assented but was none too happy being woken to take the call wrongly assuming the call was a result of someone having  died! 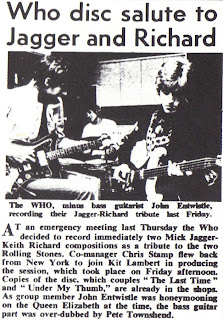 "The Last Time" is not bad thanks to Pete's hypnotic lead riff on what sounds like a Fender twelve string while Moon thumps along (with too much tambourine way too high in the mix) and plenty buzzing, feedback laden '67 Who for you. The usual crash, bang, wallop, and pretty darn cool actually!

"Under My Thumb" is less interesting, in fact it's damn lackluster. The acoustic guitar and mixing sound like the same formula used on "Mary Anne With The Shaky Hand", it's just so empty, sparse and Pete's backing vocals do zilch for it.  Again thankfully The Stones made bail!


Both cuts were resurrected for the deluxe edition CD of their "Odds And Sods" collection (alongside similar period killers like "Little Billy" and "Glow Girl").

Hear "Under My Thumb":